Thought for the day…

The only difference between the KKK and Antifa is student loans.

Can we borrow some gauchos for a few months? We’d like to deploy them into Antifa-controlled territory…

The Fuckin’ Union That Works For You…

Evidence that America isn’t a cesspool of racism…

Exhibit A: for eight years, millions of heavily-armed People Of Pallor refused to even try to shoot Obama to put a White Man back in the White House.

Is there a bag limit on Antifa? Asking for a friend.

Usually by this time of year, I’ve had the air conditioner on, sometimes even at night. This year, I think I’ve had three days above 75°F.

BBC agrees with the 33 number.

ANN has details with links to sources.

That’s “Democrats Insisting on Reparations for Everything”, the cornerstone of the “free shit good, orange man bad” platform that pretty much everyone in the clown car is running on.

Reparations for being a gay couple denied a wedding license. Reparations for getting a graduate degree in underwater genderqueer dance therapy. And that’s just Warren and Sanders this week. How long until they promise reparations for trans activists denied dates by people who don’t find them attractive?

(raise your hand if you immediately answered “next week”…) 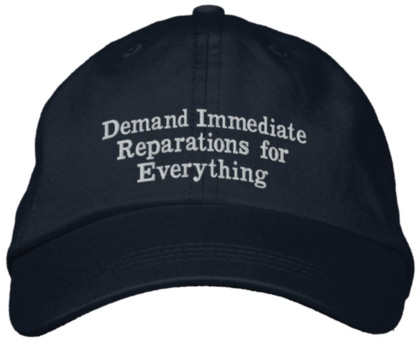