Your appeal is becoming more selective. This is rarely a way to improve sales.

Seriously, do you honestly think there’s a large potential audience that has passed this game over because the PvP isn’t obnoxious enough? That’s the hill you choose to die on in this franchise?

Audio dramas with a side of gaming

One of the things that’s always been difficult for non-Japanese anime viewers is the amount of extra untranslated content that develops the characters and cleans up the stories. The mobile game for the “Is it wrong to try to pick up girls in a dungeon?” franchise is only moderately interesting as a game, but is absolutely stuffed with story, with music, art, and voice work by the anime staff and actors, and side stories co-written by the original author, making it all canon.

The only downside is that the game mechanics are optimized for deep-pockets “whale” players, and it gets increasingly grindy for free players after a while. You get enough “stamina” credits to play for free for quite a while each day, but unless you get some lucky gacha draws, you’ll eventually stop progressing through the quests, and be forced to spend your time grinding for materials and cash to upgrade your sub-optimal party members and/or replace them with better ones.

Fortunately, by then you’ll have unlocked a number of side stories that flesh out characters who are barely touched on in the anime, some of which are quite lengthy. (seriously; the catgirl waitresses just got a sequel to their previous adventure)

Performance-wise, the game is a real space-hog (3+ GB without the optional extra voice content; make sure you’re on wifi when you run it the first time) and battery drain, and will not run well on older devices with limited memory. For instance, on my iPhone 6+, it’s too big to stay suspended in memory if I switch to any other app, it takes quite a while to load, and it drains the battery very quickly, so I play on my iPad Mini 4 instead. (you can transfer a game between machines using a code/password combo)

It’s fully translated, and most of the Japanese voice content is subtitled (except for combat taunts, etc). The chibi versions of the characters are adorable and well-animated. Many of the side stories are a lot of fun. The main questlines cover both anime seasons and all three novel series, and given the kind of money they must be pulling in, I expect they’ll keep adding more.

The casino “poker” game unlocked at the end of the Ryu questline is really just a slot machine that’s almost impossible to lose money at, but it provides another way to grind for upgrades when you’re bored with the usual ones.

There are a lot of things not made clear in the documentation, and I was kind of surprised that none of the FAQs really cover it well, either. For instance, I was running around with a gimped party for quite a while because I didn’t realize that assistants add all their stats to the character they’re paired with, making it important to level them up just as much as the adventurers, and to pay as much attention to the distribution of their stats as to the buffs they provide.

Also, “White Healer” Amid was my single best gacha pull. I wouldn’t have made nearly as much progress without her in my party, and I’d almost pay to limit-break her right now.

I did make a single in-game purchase (“Syr’s Daily Lunch Box”, which provides resources for 30 days) to reward the company for amusing me, but everything else costs about 10x what I’d be willing to pay, and even paying real money doesn’t let you pull specific characters.

After the latest mildly-hyped upgrade, how is No Man’s Sky? It’s an early beta of a half-decent $20 indie game, currently on sale for $60. With some mods (Faster Walk, Faster Scan, and Reduced Launch Cost, at a minimum) and the save editor, you can work around most of the remaining design flaws and bugs, making it possible to see the originally-promised game off in the distance.

Still plenty of deliberate user-hostile design decisions, including some brand new ones (like stretching out the limited quest content by adding real-time delays between each step in a chain, ranging from 1 to 6 hours (!)).

Modding is still possible, in a fragile, clunky way, but one early mod that I liked hasn’t worked for a long time: changing the suit audio to Japanese.

With some hints from one of the forums and a copy of Sony’s PSARC tool, I was able to come up with a crude but functional method to generate a working mod for any of the supported languages. All of the other languages seem to be quieter than the English voice, but that’s actually a bonus, given how annoying the damn thing can be.

Edit to set the location of your game data and psarc, choose your standard language and what you want to replace it with, and run the script. It will chug for about 10 minutes extracting the language-specific audio from the right PAK file, then repack them under the localized language patha. The resulting mod is about 8 megabytes.

Releasing it as a batch file not only avoids the copyright problem that helped sink the original mod, but also allows you to apply any of the 14 supplied localizations to any other, so someone playing the game in Korean could have a Polish space suit, for instance.

[Update: Oh, FFS, NMS! You changed the paths for all the audio files between 1.55 and 1.57? Are you all descended from the surviving deck-chair-rearrangers on the Titanic?

…and now replaced with a more robust version that will be easier to fix the next time they move everything around.]

No game at all when they decide to shut down the servers.

Thinking about it a little more, I think there’s going to be a much bigger problem than any of the above: nerfs.

Even if it’s not just a gankfest of foul-mouthed randos, the simple fact that it emphasizes PVP is going to produce frequent “game balance” updates that force you to change your play-style whenever someone comes up with a min-maxed buildout that lets them roflstomp your painstakingly-crafted homestead.

Clearly, the only way to play is in carefully-curated groups of like-minded friends, so of course I expect them to make that hard to do, and default to dumping you into public servers.

I’ve been reworking the code behind my random word generator, to generalize the methods of modeling the source word sets and creating the output. The first fruit of that is one tuned for Pinnacle’s new Savage Worlds Of Flash Gordon RPG (slowly trickling out for Kickstarter supporters, and being vigorously edited on their forums).

For the source file, I took every Mongo-ish name/word I could find from the original comic strips, series, and movies (all hail the concept of wikis), and added everything Pinnacle has created in their new books. They’ve done a great job of mixing their own names with the originals, IMHO.

Unfortunately, it’s still a fairly small set (285 words at the moment) with wildly divergent phonetic patterns, making it unsuitable for either trigrams or n1grams, so I kept the lessons I learned and threw away most of the code, creating a brand-new digram-based generator that preserves more flavor than the obvious implementation.

As configured, mongowords can generate at least half a million distinct words, and even at the end of the list, a fair number of them are usable. With the new code, it will be easier to merge back the full feature set from the old one, while supporting a wider range of generation techniques.

Now that that’s out of the way, back to finding errors and tyops in the new rulebooks!

As far as I can tell, the Savage Worlds RPG has never been playtested against veteran rules lawyers. Fourteen years after the first release of the core rulebook, there are still significant ambiguities caused by flavor text, inconsistent wording, and poor organization. The FAQs and forums do not clear them all up.

I suspect that the only reason the system thrives is that it’s largely taught at cons rather than learned from the book.

Half the fun is figuring out which official downloads to ignore. The current version of the Test Drive rules is the one in the Lankhmar section of the site; the only sidebar link in the Savage Worlds section that’s current is the GM Screen Tables (and it oversimplifies some rules).

Out of the tiny number of people still playing No Man’s Sky on the PC, there exists an even-smaller number who have completed the main quest in Permadeath mode, and of those, a very small number of masochists who chose Raging Galaxy as their destination and ended up in Calypso.

So, for those dozen or so players, if you want to travel through a portal and visit someone’s base to either get the Steam achievement or pick up a decal, come to Pinky’s World: 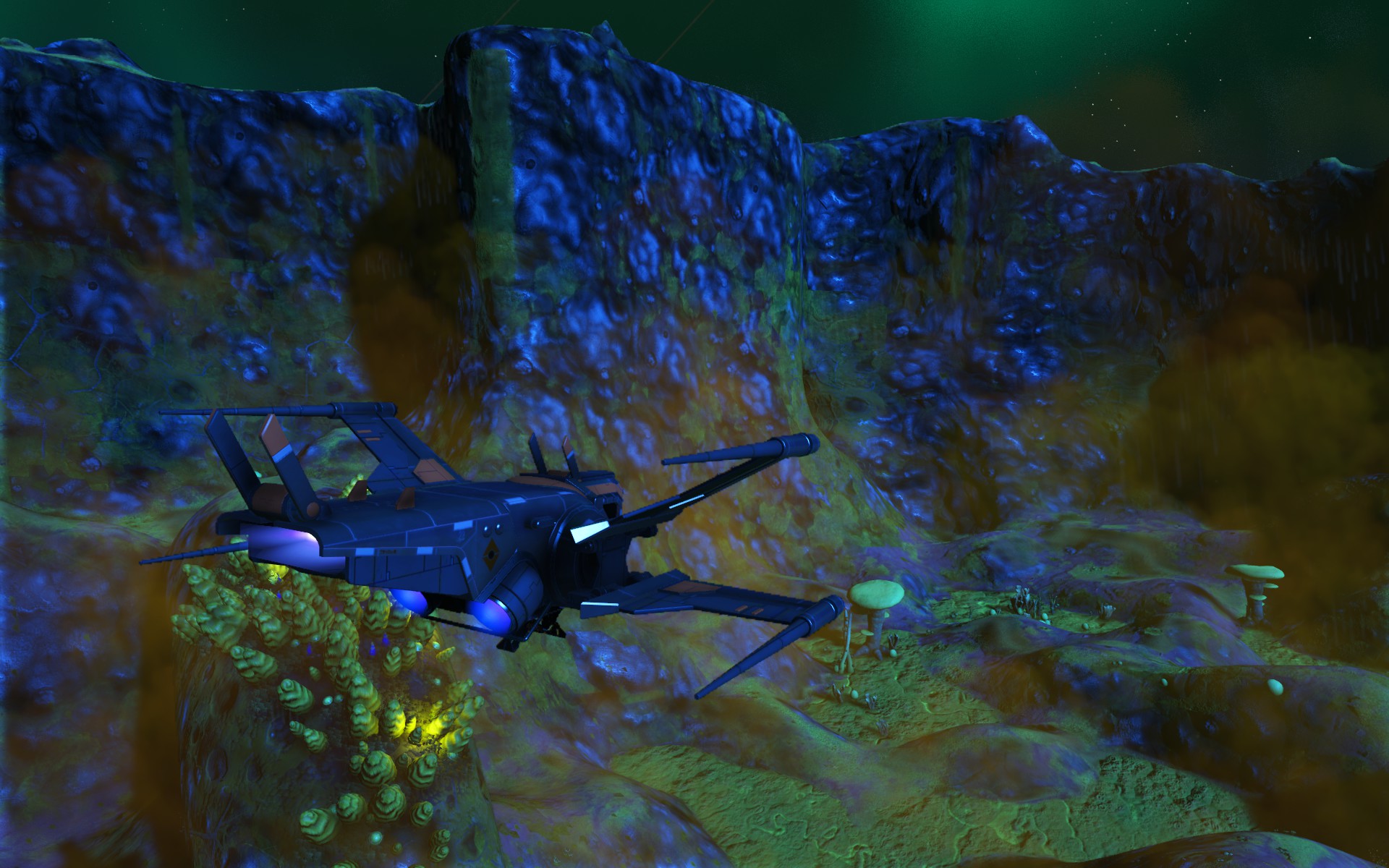 Just watch out for the Bone-Stripping Acid Storms (not a euphemism).