(in the final scene)

The mostly-straight adaptation of the first novel was good. The chainsaw-and-superglue attempt to race to book six as the finale, not so much. Honestly, they used the middle novels and the supporting cast so little and so poorly they’d have been better off jettisoning it all and focusing on Our Heroes versus Zelada.

Focus. That’s what was missing. The vampire story from book two? Interesting, but nonessential, with dangling plot threads that went nowhere. Tirana’s undercover work and cute whore girlfriend, which was apparently anime-original (replacing her going undercover as a schoolgirl and losing a completely different friend)? Some nice character development, ruined by the baffling decision to completely ignore Tirana’s justifiable thirst for revenge, start the next episode as if nothing had happened, and put her into the cat’s body for an episode and a half. And then suddenly we’re in book six, and as that story starts to unfold, they break it up with a clip episode. WTF?

The alternative, in the hands of a good team, would be to build on the source material and set up the confrontation with Zelada for a second cour. Do the cop stuff, do the wacky stuff, flesh out the supporting cast, and leave the audience demanding another 13 episodes.

So much potential, so sadly wasted. I’m not sure it even works as an ad for the novels, although the first few episodes got the whole set into the top 20 on Amazon Japan briefly. Since then, book 7, originally scheduled to come out in September, has been delayed, and doesn’t show a release date.

…and…done. With a post-credits scene setting up the next season, whenever that will be.

A quiet, warm finish, with Hestia having a rare moment of serious goddesshood before reverting to her wacky self.

New character in game? Peasant wench Ais. I’ve already got eight versions of her (and way too many Bells and Hestias, most of them useless), and the only one I’ve maxed out is Summer Princess, which was the first character I was able to max-limit-break, and still a reliable front-line fighter.

Haruhime is my only other maxed-out character, who more than doubled my high score in the current RecordBuster, allowing me to finally finish off the last of the Expert Adventurer missions and get a guaranteed 4-star pull (which, sadly, ended up being that asshole Hyakinthos; good for a fire team, if I were to pull him five more times and invest a lot of resources, but honestly, I’d rather sell him for Dulb).

Finished watching Kanata No Astra (which really needed 18 episodes, but got 12, with 2 of them double-length), and when Ulgar’s brother got some screen time, I immediately recognized his voice as a very different character: Dennis Elbaji, from the first story arc in Cop Craft.

What didn’t hit me while watching either show was that it was the same voice actor as Kane McDougal from Mouretsu Pirates. Also Dionysus from Sword Oratoria and the DanMemo mobile game (a character who admittedly doesn’t get a lot of lines).

Kanata, of course, is another voice I hear a lot of, as Welf Crozzo. And Aries is Hestia, Yunhua is Ryu, Polina is Tsubaki (Sword Oratoria), and Ulgar was Soma (DanMachi 2).

Another interesting note: the primary scriptwriter for the series was the creator of the School Live! manga.

The thing that makes episode 12 so unsatisfying is that they wrapped everything up by telling, not showing. Laying it out all at once as talking-heads scenes highlighted every weakness in the backstory, drawing attention to elements that frankly don’t work. Playing it out over, say, 4 more episodes would have improved the story by letting them reveal less about the universe.

Seriously, “we established a world government that abolished guns, religions, nations, languages, and the history of the world, and all of the survivors went along with it for the rest of their lives. Also, abolishing guns (except the world government’s, who never lets them fall into the wrong hands or abuses their monopoly on force), religions (nobody cares enough about those to ever, y’know, worship in secret and have their faith strengthened by persecution), nations (trivial!), and languages (even more trivial!) created lasting world peace.”

“And we all agreed to hide the secret of wormhole technology by leaving it in the hands of the company who invented it and made themselves royalty, despite the fact that they somehow let it fall into the hands of random terrorists and criminals who were responsible for accelerating the fall of Earth.”

…and that’s just the parts I noticed while they were plotsplaining. If I actually went over episode 12 and compared it with what we were shown at the start of the series, I think it would come off a hell of a lot worse. I just don’t want to, because I liked the parts leading up to that point.

In the DanMachi universe, the economy of Orario is adventurer-driven. Not only do they protect the city (and the world), the magic stones that monsters drop are the basis of all technological advancement, and their most lucrative export. But to get magic stones, you need adventurers, and to get adventurers, you need gods to provide their blessings.

So when the gods make requests… 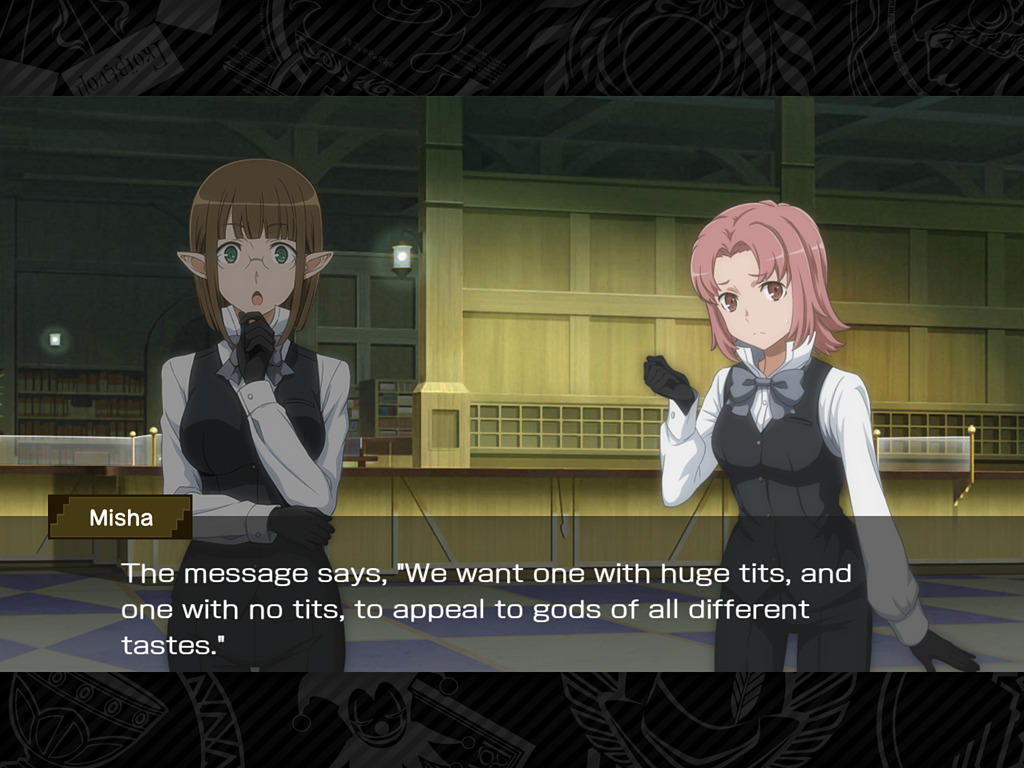 (from the mobile game)

The novelist came up with a pretty good way to make sense of classic fantasy RPG tropes, but while he’s fleshing that out and exploring some of the darker implications in the side series, if you really step back and look at it, the ugliness and brutality goes to the bone.

All those sweet, pretty guild advisors are sending children to their deaths every day. Not just in the sense that the gods view all their followers as “children”, but young teens and tweens, and if you look around in crowd shots, sometimes much younger. How long do they last, before it hits them that the upper levels are a meat-grinder lined with the bones of the kids they sent in?

It’s not a story I’d enjoy nearly as much as the cheerful harem comedy we got, but sometimes I think about how the world we’re not shown is seriously fucked-up.

Since last week’s clip episode gave the Cop Craft team extra time to make an exciting, coherent story… No, wait, it’s a mess. I really wasn’t expecting this series to end up at “who’s interfering in the mayoral election?​”. The chase scene wasn’t bad, but Kei finding the needle in the haystack broke up the action in a way that just sucked all the fun out. It’s possible I’ve already forgotten half of this episode. Also, blah-blah-blah-technomancy-blah-blah.

This week’s new character in the game is of course Ares. I didn’t even look at his stats and skills, since as I mentioned in my update to last week’s comments, Haruhime is so OP that she utterly dominates the current Wargames, and when both sides have her counter rate buffed, the fight is like watching paint dry. She lacks the cleansing power of the 3-star Lili that carried my party for so long, but her combination of heals and buffs and debuffs is insane, and she has good AoE damage.

Seriously, if you could configure your Wargames party with a “kill the foxgirl first” button, everyone would. Her in-game powers have almost nothing to do with her book/anime power, but the net effect is pretty much the same. 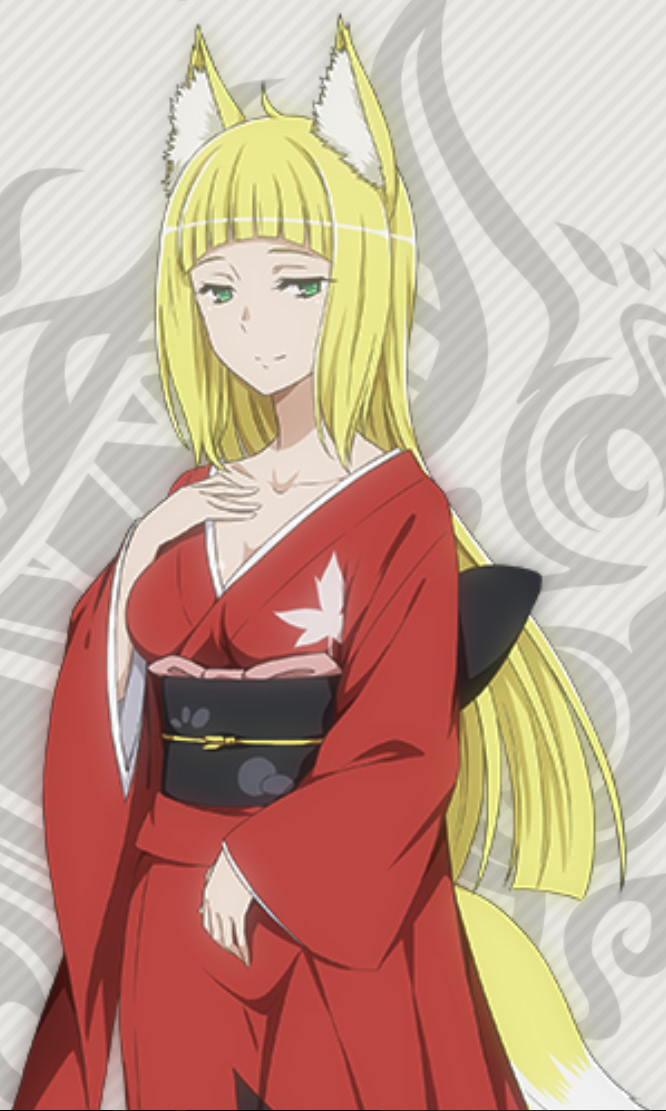 (unless she's on your side)

Looks like the whales have figured out which units to combine to counter her. For those of us unwilling to spend hundreds of dollars per month on a mobile game, victory is “killing the other guy’s foxgirl first”.

In which Shion learns a new survival skill, opening up the possibility of an exciting career in the soapland industry.

“Let us never speak of this again.”

Pro tip: do not piss off Ottarl. Nice touch having him show a moment of kindness for contrast.

And Bell, you really need to work on the MCSA effect for your firebolts.

Haruhime is (finally!) the new character in the game this week, and I’m pretty sure she’ll be showing up in a lot of Wargame teams. Possibly all of them, since I went ahead and spent free Iris on her 10 gacha pulls, and got enough to max-limit-break her (guaranteed 3, got 6; even if I’d had any paid Iris, I wouldn’t have needed to spend it).

New Wargames started last night. A Haruhime buffed with increased counter rate is as unkillable as an old-school WOW pally. Why?

This is her standard attack, which hits all opponents and significantly debuffs them:

This is her passive effect:

Encouragement: I
When countering, instead of attacking regularly, it (Lo) Heals an Ally. Prioritizes an Ally with lower percentage HP.

There is no limit to how many times this effect can go off in a turn. If her counter rate is buffed, she’s constantly healing the most-damaged member of her party. If you can’t one-shot her, even damage-over-time effects won’t wear her down. And guess what one of her other attacks does?

And if you make her assistant “[Cyan] Naza Ersuisu” (which you should, just to have a bikini hot dog with a kimono hot fox), here’s her effect at level 80:

Was watching an episode of Zombieland Saga just now, and realized that one reason people are disappointed with Cop Craft is that the OP isn’t over-the-top enough. It’s more exciting than the show they actually made, but within the bounds of plausibility. They could have made a show like the OP, and since they don’t seem to care how coherently they’re cramming six books into 12 episodes, perhaps they should have.

The fundamental problem is that Zelada is built up as the Big Bad with a connection to Kei’s past, but he’s not in books 2-5. Someone decided they needed to wrap up the story from book 1, and took a chainsaw to the other books to make them fit. This week’s clip episode suggests they’re having trouble gluing it back together.