Because I bought a Kindle, your recommendation system now fills the first several pages of results with random ebooks that either I already own in print, or else are not even plausibly related to anything I’ve ever purchased, owned, or searched for.

"Hey, you need to fill your Kindle with books! This is a book! It has a cover and a title page and words inside! You like words, right? Of course you do!"

Here’s one of the least stupid suggestions:

Because I bought Cooks Illustrated’s Italian Favorites, I really, really want to read about a monster-hunter who’s in over her head.

Other Kindle-fied “recommendations” include one called Blink, subtitled “The power of thinking without thinking”, because I own Beard on Food.

I can’t blame it all on the Kindle, though; that 750GB laptop drive I just bought led to a recommendation for a Gillette single-blade disposable razor. And there are some actual relevant recommendations, such as Shogun because I bought Exploring Kyoto, and James Beard’s New Fish Cookery because of the aforementioned Beard On Food.

And I really can’t complain about the DVD of Xanadu, recommended because my wishlist contains the Flash Gordon Blu-ray release. That’s just common sense.

Presenting some random guy’s download from Project Gutenberg as if it were the Kindle edition of an in-copyright book by a respected translator is not acceptable. I can’t safely order anything from your listing of Jay Rubin’s translation of Rashomon and Seventeen Other Stories, because there are clearly several different books here. Even the featured editorial review refers to someone else’s translation. Worse, the page changes slightly each time I reload it, apparently due to different indexing on different servers.

If I ignore the official link from his author page, and search by his name or by its ISBN, I find the real book here. But if I trust your listings, I’m screwed.

(yes, I sent in feedback; hopefully someone will clean up the mess)

Yeah, I got nothin’.

The lighting in my cubicle isn’t that bad!

Remind me not to order anything else until things stabilize enough over there for shipping costs to come back down. Ow, my aching wallet.

Also, WTF with the limited edition of the Dream Morning Musume album? It was never up for pre-order, and on release day, by the time I finished getting through the checkout process, it was out of stock and only available through Marketplace dealers who won’t ship to me.

[Update: my order was split into two shipments, with 6 items coming from Osaka and the other 24 from Tokyo. They managed to reach Hong Kong two minutes apart, departing four hours later for San Francisco. I figure I’ll see them Tuesday morning. Annoyingly, the limited-edition DoriMusu album is once again in stock and orderable, grrr. I didn’t want to risk it suddenly disappearing again, so I quickly finished the order and had it sent alone. Ouch.

I understand that you can’t treat limited-edition items as normal back-orders, but they frequently don’t even handle pre-orders well. My suspicion is that the problem is a flaky distribution chain that isn’t reliably delivering the quantity that Amazon orders, and not just for limited editions. Note that this is not a “big quake” issue. I’ve been seeing it for quite a while, so I think Japan’s well-padded and obsolete distribution system is reacting badly to Amazon’s success, and this is similar to the legal obstacles that keep them from offering deeper discounts.]

[4/25 3pm update: DHL delivered them today. So while the price was painful, the service was excellent.]

I’d like to improve the quality of the recommendations I receive from you. Unfortunately, it’s been clear for a long time that I’ve given you Too Much Information, causing the system to produce basically random results.

The Real Reason For The Civil War because of Slow Cooker Revolution? Amusing. Bacteria-filtering disposable face mask and a watch toolkit because I buy Cajun salame? A bit odd, don’t you think? Hemorrhoid cream because I bought a folding screen? Downright peculiar. Murder on the Links and The Photoshop CS5 Book For Digital Photographers because I bought Soups and Stews 2011? Uh, yeah, right. A ten-year-old Sony 5-disc CD changer because I own Better Homes and Gardens New Cookbook? WTF?

And that’s just today; I’ve seen far worse in the past. There’s still some wheat mixed in with the chaff, so I haven’t given up, but every time I use the system, I mark more items “not interested”, and make the problem a little bit worse: 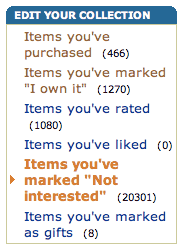 I wouldn’t mind cleaning that list up a bit, but there’s no way in hell I’m going to go through 1,353 pages of recommendations in reverse chronological order. By the way, while writing this, I added another 300 items to the list, so make that 1,373 pages…

[Update: a SOG Tactical Tomahawk because I bought rechargable batteries! Paco Rabanne Lady Million perfume because I own a 1 TB external hard drive!]

The Kindle for Mac application is crap. Not in the sense of “limited functionality and poor UI” (although those are true, too), but in a more serious “corrupts user identity every time it does its (weekly?) auto-update”. I had originally thought the problem was with the version available in the Mac App Store (which, thanks to Apple, is much, much older), but no, the direct download from Amazon does it as well.

Basically, if I open the app and it asks me to accept terms and service, I know that it just wiped out my account credentials, and I’ll have to delete:

then deregister it on the web site, launch the app, register it again, and then re-download everything (painfully slowly, thanks to the poor UI).

I note that no one ever responds to people who have this problem on the Kindle support forums, and the last response I got to a direct email report was “gosh, we’re sorry; I’ve forwarded your message to the team!”.

[Update: and again! This time when I finished re-downloading everything, I made a tarball of the known good copy. Next time it blows up, I’ll have a before/after to send them. Grrr.]

ON A WEEKEND TRIP TO HAWAII, A PLASTIC SURGEON CONVINCES HIS LOYAL ASSISTANT TO POSE AS HIS SOON-TO-BE-DIVORCED WIFE IN ORDER TO COVER UP A CARELESS LIE HE TOLD TO HIS MUCH-YOUNGER GIRLFRIEND.