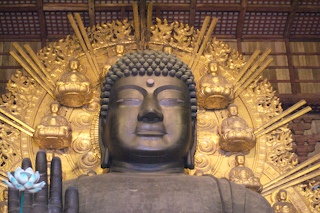 In modern Japan, though, you’ve got to be cute to survive:

絵馬 (ema) are small wooden plaques purchased at shrines. You buy one, write down a wish (health, fame, fortune, romance, entry into a good school, etc), and hope that the gods will grant it. Eventually they all get burned up as offerings. 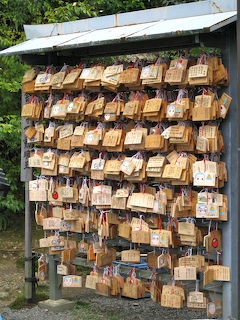 Tofu: you can run but you can't hide

I’m not sure why this little guy is trying to escape. The food at Junsei is excellent. 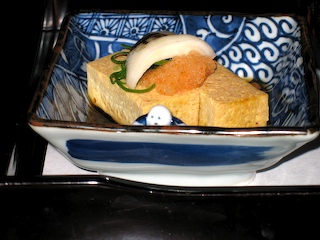 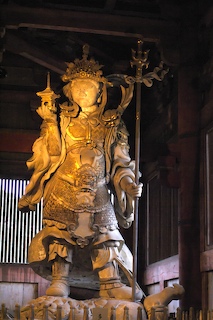 A big problem with temples and shrines is that they’re generally pretty dark inside. In many cases, even an up-to-the-minute digicam that has optical anti-shake and can shoot at the equivalent of ISO 1600 film speed isn’t good enough to get a sharp picture. And even when the picture’s sharp, there’s so much noise that it looks like crap. Flash is useless unless you brought along a pro rig that has an external battery pack, and tripods are usually forbidden. So, what to do?

I got a few decent indoor shots with my pocket digicam (a Canon IXY 2000IS purchased in Akihabara; domestically, it’s known as the PowerShot SD950 IS), but it was a crap shoot. If we hadn’t been with a group, I’d have taken several shots of everything and braced myself against something, but there wasn’t enough time.

Fortunately, I had my Sony a100 DSLR along, with a 50mm f/1.4 lens. It made the above shot easy, and the below shot possible: 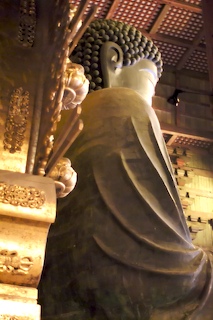 The first picture was shot at ISO 1600, 1/80th second, f/2. When zoomed to the equivalent focal length, the little Canon can shoot at f/4, which would have yielded a 1/20th second exposure. Not too bad, with anti-shake.

The second one was much harder: 1/8th second, f/1.4, right at the edge of the Sony’s anti-shake ability. The little Canon would have needed a full one-second exposure, which means a tripod. Even then, there were so many people walking around on the wooden floor that the vibration might have introduced some fuzziness. The Canon has an ISO 3200 mode that doubles the speed but cuts the resolution to 1600x1200, but half a second is still too long for hand-held, even with anti-shake.

You can extend your range by bracing the camera against a sturdy object, using a monopod, or finding someplace that you can set up a mini-tripod, but the most important things to have are fast exposures, wide-aperture lenses, and Noise Ninja; these pictures were a lot grainier before I turned NN loose on them.

I had brought a mini-tripod with me, but rarely had a chance to use it. Next trip, I’ll bring along my REI collapsible carbon fiber walking staff and a Bogen mini-ballhead, which makes a better monopod than most of the ones you’ll find in camera shops. It’s a bit shorter than I’d like, especially when used properly as the third leg of your human tripod, but it doesn’t scream “camera stand” when you’re entering a no-tripod zone.

And, to be honest, there are places where I wouldn’t mind having a walking staff… 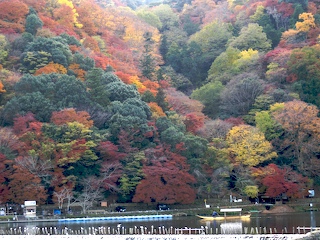 For Will’s benefit, here’s where I was when I took the picture. Take the train from Kyoto to Arashiyama, then head south to the river. Or go a few more stops to Kameoka, and ask for directions to the Hozugawa Kudari boat ride, which drops you off at that spot in Arashiyama. 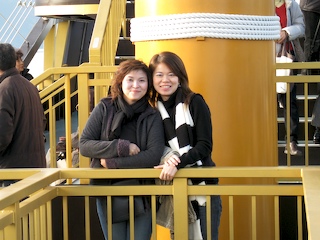 It’s Christmas Eve, so as a present to myself, I’ve finally posted a “babe” picture from my trip to Japan. I didn’t take pictures of most of the good-looking women I saw, mostly because I saw them under circumstances where whipping out the camera would have been rude. As it is, my best shots are of the two Malaysian tourists who were with us on the trip to Fuji; they have pictures of me, too (shudder).

More or less. I had to infer the meaning of some of the words that aren’t in Edict or my other J-E dictionaries. 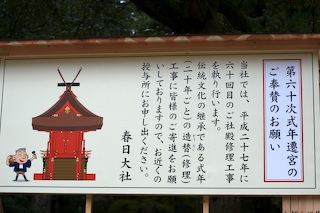 Here’s a transcription of the text:

I’ll do a full translation when my lingering cold stops lingering. 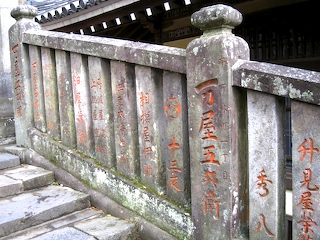