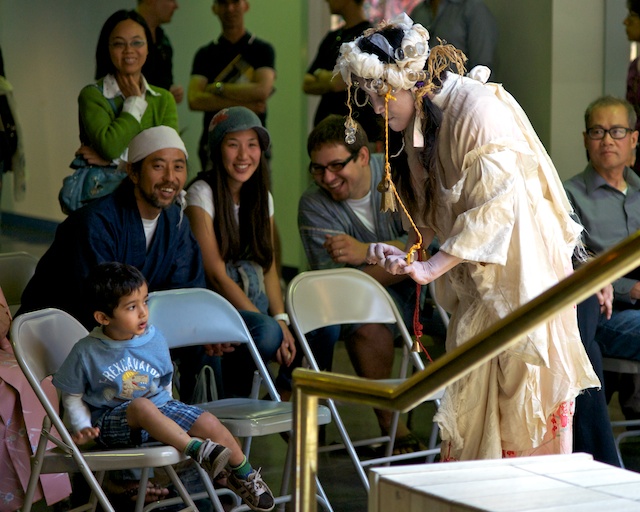 “No offense, ma’am, but when does the pretty girl in the kimono come back on stage?”

I’d never heard this one before, but it showed up on URA MELON (now available on the US iTunes store; they really are getting better about releasing stuff internationally). No video, but someone has uploaded it to Youtube as the soundtrack to a really awful low-res still photo. The title is Fuwafuwafuu, or “Fluffy…”.

For a band that Hello!Project had no real interest in promoting, they certainly let them record a wide range of material. And they gave them the single goofiest video in the history of the agency…

Ubuntu Magazine in Japan has decided that penguins are the wrong mascot for the market, and replaced them with junior idols. This month’s centerfold is 12. 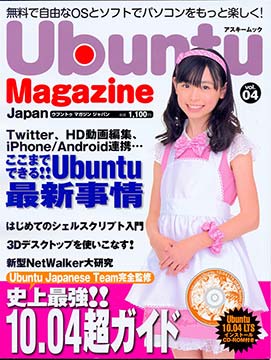 [and, yes, I’m using “centerfold” loosely; the photos themselves are wholesome and innocent (more so than you’d expect from the generally quite creepy U-15 market), it’s just the placement that’s new. They’ve launched a new bi-monthly Linux magazine where one of the main attractions is pictures of young girls.]

One of the first things I did when I got home with my shiny new Sony Alpha 850 camera was try to find out if it could honestly deliver on its 24 megapixel resolution. The image is 6048x4032, but does it actually resolve?

First off, is it physically possible? If you break out an optics textbook and do the math on a full-frame 24x36mm sensor, it is possible to keep the circle of confusion below the pixel size at apertures wider than about f/8. With a terrific lens. And a tripod. And a cable release. And mirror lockup. And no wind.

Mind you, the actual measured lines per inch matters far less to me than the fact that it’s a full-frame DSLR that takes all my old Minolta lenses; I’d have been perfectly happy with a 12-megapixel full-frame body, but since 24 is what’s available…

I didn’t feel like breaking out my big tripod or my good lights, so I settled for getting into the ballpark: a decent lens (Tamron 90/2.8 Macro) at 100% magnification, a sturdy table-top tripod, cable release, mirror lockup, indoors, available light. ISO 100, f/8, 6-second exposure. Developed from RAW using Sony’s app, resized and cropped in Photoshop with no other modifications.

Taking the Hello!Project out of the girl

Perhaps the greatest sin of the Hello!Project costume designers is that their young victims graduate with no awareness of their handicap. This has led to many post-H!P fashion disasters, of which this is not atypical.

Maki Goto, despite cutting all ties with H!P and signing with a much better record company, remains scarred by her long association with the agency. Take, for instance, the recent promo pic for her web site: 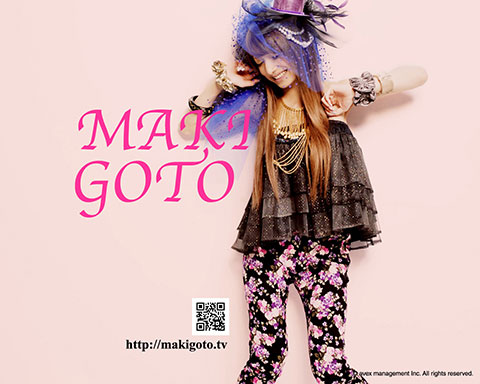 I am delighted to report, however, that she seems to have found at least a partial solution to the problem, now that it has come to her attention (NSFW):

In general, I am such a happy Amazon customer that it pains me to say this: “fuck you and that obnoxious pop-up-every-N-seconds Sprint ad”. Yours is one of the few sites where I have permitted Flash to function, because you generally use it in manners compatible with my wishes. Popping up a large ad every time I try to read the details of a product, and forcing me to dismiss it by moving the mouse, is Bad Form.

I note that it is exceptionally difficult to offer direct feedback to you regarding such things (asking me to clickthrough on an embedded Flash ad is not an acceptable means of soliciting feedback on it), so consider this a public notice that I am now blocking an assortment of URLs on g-ecx.images-amazon.com in order to restore functionality to your site.

What else would they be?

How to motivate soldiers

[Update: Bumped to the top (more precisely, recreated, since bumping hoses the navigation links), since the original videos disappeared almost immediately, and I just found another source for the show they came from. No short clips, and their embedding code doesn’t seem to let you specify the starting offset, but their simple link code does.]

South Korea has nothing to fear from the North. Not so long as their army knows what they’re fighting for…

Bonus clip of Yoona being a little too embarrassed to do a sexy solo dance routine, until the entire audience begs for more.

With regards to Safari 5’s new Reader mode (whose availability is subject to unknown and quite whimsical heuristics):

While I’m here, every version of Safari has suffered from the problem that right-clicking a link disables all mouseover events on that page until you click somewhere else. Even the builtin cursor change on mouseover is disabled. This remains true in this latest major revision. Has no one else ever told you about it?

Flickr user Eric Fischer has done a very nice bit of data-mining in his Locals and Tourists set, analyzing geotagged photos and overlaying them on city maps, color-coded based on how much time the photographer spent in the city (blue for “locals”, red for “tourists”, yellow for unknown).

The details of his data sources and processing are not included, but the background street map can be used to overlay his images on Google Earth, making it possible to visually survey the hot spots, and the results can be quite interesting.

So far, I’ve had less success getting a precise match on his Kyoto map, but I’m off by less than a block in most parts of it, so I can still see some interesting places to explore.

[Update: Something I found around Kyoto, by looking for isolated clusters of locals. It was taken at Yoshimine Temple; not an easy place to get to, but obviously worth the trip.]

[Ah, and found his data]

Want a perfect example? Let’s say I just got email that included a UPS tracking number, and I want to go to UPS. When I start typing the string “ups”, what does Safari 5 “helpfully” append to it?

In the right half of the URL bar, in gray text, it shows the beginning of this amazing string, which turns out to be the result of clicking on one of the “people who bought X” buttons on Amazon. Yeah, that’s exactly where anyone who types “ups” wants to go, every time. Stupidstupidstupid, and no way to disable it.

Back from the dead...

Fontographer 5.0 is out. I knew they’d done a cleanup release after acquiring the old code, but I hadn’t expected the FontLab folks to do major new development on it.

I thought you said that accounting rules required you to charge for iPod Touch software updates. So why is it that the big iOS 4.0 update showed up for free for me?

Not that I’m complaining, you understand. Perhaps if iOS 4.0 makes my iTouch more iuseful, I’ll eventually be persuaded to ibuy an iPad, a device that hasn’t yet caught my ifancy.

Yukie Kawamura is a successful model in Japan. She has a nickname, ゆっきー, derived from her first name, ゆきえ.

If you can read hiragana, you can see where this is going. For the rest of you, her name should be pronounced as if it were three syllables yoo-kee-ay. Her nickname was formed by replacing the “ay” with an extension of the “ee”, and adding a glottal stop before the “k”, for “yook-(pause)-eeee”, which sounds precisely like something a devoted fan would shout upon sighting her.

What does it look like romanized on a mildly-NSFW DVD cover?

From 3,200 miles up, dots are visible representing the major population centers of Japan.

From 3,000 miles up, I can see the country’s name in English, as well as labels for the dots: Kōbe, 大阪, 神戸, Nagoya/名古屋, Yokohama, 東京, Saitama (yes, in this precise mix of kanji and romanization), and I gain one lonely dot in Hokkaido. Amusingly, I also gain two labels for the body of water to the west of Japan: East Sea, and Sea of Japan.

Just below 3,000 miles, that dot in Hokkaido gains the labels Sapporo and 札幌. Also, prefectural boundaries begin to fade into view.

At 1,700 miles, Chiba/千葉 gets a dot and two names. Since I’m centering the main island in the viewport, so does Fukuoka/福岡, and four islands get names: Shikoku, Kyushu, Hirado-shima, and Tanega-shima.

(note: mousing over any of the points highlights it for the renderer, so if my mouse passes over 大阪, it will gain the label Ōsaka, which will persist out to 3,000 miles until I highlight something else; after discovering this feature, I’ve been careful not to disturb GE’s natural selection mechanism…)

Just above 1,500 miles, the 東京 dot adds the name Tōkyō. The main island Honshu joins the list, as do Awaji-shima and Fukue-jima. We also pick up Seto Naikai, the inland sea.

Just below 1,500 miles, a dot and a name for 横浜, and off in the corner, lonely little Okinawa-jima gets a name. From here on in, I can’t keep everything from Okinawa to Hokkaido in view, so I’m going to center on roughly where I believe Kyōto to be. I can’t see it yet, but I know it’s near 大阪, whose label just disappeared. When I center it in the viewport, I don’t get 大阪 back, but the point is now labeled Ōsaka, so onward!

100 miles up, still no dot for Kyōto; the prefecture name is in the upper third of the screen, but it looks pretty sparse up there; that can’t be where the city is.

Below 100 miles, city boundaries start fading in, but still no new dots.

50 miles up, and the dots for Ōsaka and Kōbe are nearly offscreen, and the Kyoto prefecture name is soon to follow. Still no new dots.

40 miles up. Ōsaka and Kōbe gone, Kyoto prefecture name gone, no more dots, no more labels. There are two city-looking areas on the map, a small one near the center and a bigger one off to the right. Let’s center the big one in the viewport. Nope, still nothing.

25 miles up, and I’ve got ku! Within a single unlabeled border, I see Kita-ku, Kamigyo-ku, Nakagyo-ku, Shimogyo-ku, Higashiyama-ku, Yamashina-ku, Minami-ku, Kishikyo-ku, Fushimi-ku. Nearby bordered areas gain the labels Muko-shi, Nagaokakyo-shi, Uji-shi, Oyamazaki-cho, and Shimamoto-cho. I’ve got all the wards of Kyōto, but not the city itself.

12 miles up, and I’ve got new dots. Most of them add detail and kanji to my previously-known ku’s, but one of them actually says 京都市. Also, off in the corner, I now see Ōtsu/大津市.

As I pass the 10-mile mark and the display switches to feet, there it is at last, the label Kyōto. From this distance, I can see that Kyoto Station is neatly centered in the viewport.

Of course, I could have just typed “kyoto” into the search box and flown there in an instant, but where’s the fun in that?

Oh, and when I let GE find Kyōto for me, it took me straight to City Hall. When I zoomed in close and turned on the Panoramio layer, I found a photo insisting that City Hall looked a lot like Kinkaku-ji, the Golden Pavilion. I logged into Panoramio and suggested relocating that one 3 miles northwest.