[Update: Okay, now that my ears have recovered from the assault, I can say that 17才よさようなら doesn’t suck. I barely reached it the first time I listened to the album, because everything else is so awful. This one has better voice processing, better use of your range, a less amibitious vocal style, and, yes, you know how to deliver lines in Japanese far better than in English. The worst part about the song is actually the part where you’re not singing, so go ahead, do more like this one.]

The title of your new album is “Ai Kago Meets Jazz”. In line with my policy of supporting the segments of your career that do not involve truly dreadful photo shoots, I included it in my latest order from Amazon Japan. Thirty seconds into track 1, I began regretting this decision, as I realized that they never said anything about singing jazz.

I knew your voice was thin (but occasionally pleasant), I knew your English was weak (in an often-amusing way), but I admire the way you’ve managed to build more publicity and success after being kicked out of Hello!Project than most of the other girls will ever get while they’re members. So I bought it, and, well, it sucks.

I mean, really sucks. Halfway through, I found myself hoping for a duet with William Hung, so my ears would stop bleeding. And I liked your previous single “No Hesitation”, and even the b-side “Children of the Night”, despite its painful Engrish interlude. It wasn’t that you were singing in your own language, just that you were working within your limits. Jazz, particularly in a language you’re not comfortable with? Forget it; you simply don’t have the skill and confidence to deliver the lines.

[okay, there are some non-painful moments, when you stick to your lower register and don’t try to jazz it up, but they don’t last long; honestly, if you’d just done it as a standards album, sung straight and pitched for your voice, it might have worked]

Yesterday was Melon Kinenbi’s final concert. Nothing left but the farewell concert DVD in July. I’ve held off on my review of their final album, MELON’S NOT DEAD, largely because the label just released a B-side collection called URA MELON that included a new song and a concert DVD. Given that most of their concert DVDs have been fan-club-only, this was worth picking up, and I timed my Amazon Japan order to include it. So, double review coming soon. [Update! there’s also a new music video on the DVD!]

Pictures from the final concert show a certain still crazy after all these years aesthetic, not surprising after having spent so many years chained in the Hello!Project wardrobe dungeon. They did manage to get out of the goofywear at some point in the show, it looks like.

In memoriam, a fansub group has released performance and interview clips from Utaban, as well as a subbed PV for their 12th single. Amusing, although I do wish the folks at ProjectHello would fix their translation of Saa! Koibito ni narou (“sukima mite” (隙間見て)= “when someone gets the chance to do something”, literally “see an opening”; yes, I’ve told them several times, and Hana even admitted she wasn’t sure about that line, and yet…).

Let me see if I understand the current situation:

A lot of people are writing to Obama begging him to solve this problem. “Cut the interest rate to 1%”, “abolish the penalties”, “let us declare bankruptcy”, or simply “forgive all student loans, period”. They look at the massive bailouts of mismanaged corporations, and ask where their bailout is.

I can sympathize with a laid-off engineer struggling to make payments on $30,000 in loans, or a single mom who got an accounting degree in night school and fell behind on payments because her kid had a big medical bill. I have no sympathy at all for someone who racked up over $100,000 in loans in order to get a low-paying “dream job” in Manhattan:

"I chose to go to a private school and I chose to work in a field where the starting salaries are low. Does that mean that I chose to live a life of struggle, wondering how I am going to pay my rent, afford the basics of living and still stay in my chosen career field…all while putting up with high interest rates and an amount of debt that brings me to tears?"

The above list includes some serious problems, and taken together they’ve created an awful mess, but it’s not one that can be wished away with a stroke of the presidential pen, even if Obama were interested. Solving the student-loan problem has a lot in common with trying to manage health-care costs and resolve the mortgage crisis, including the mis-regulation that created the problems and the mis-regulation that failed to solve them.

[Update: turns out she was in the Negima! live-action drama, as the ghost student Sayo. I knew his students would grow up cute.]

Amazon Japan recommended this DVD to me a while back: 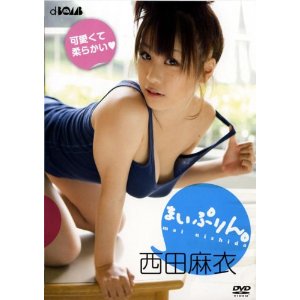 Her name is Mai Nishida, and she seems like a nice girl. The Mai/My pun is an old one in Japan, and as for pudding, well, Biyuuden made that one clear in the video for their song Ice Cream & My Pudding (warning: bunny girls!). That one has another pun, writing “ice” as 愛す = “to love”; putting it before a noun makes it an adjective modifying cream…

Back to Mai. The circled text on the front reads 可愛くて柔らかい = “cute and soft”. Not visible is the back-cover blurb, which reads, in part, 大胆ビキニから溢れちゃうぷるぷる揺れるGカップ！ = “completely overflowing from daring bikini, jiggling, swaying G-cups!”.

This was a triumph...

To celebrate the release of Mac Steam, Portal is free until May 24th, for both PC and Mac.

[Update: also, Torchlight is half-price for the weekend, and although it doesn’t sync saved games between Mac and Windows, it at least runs well on both. User-made mods have some issues on the Mac side, including differences in how the engine compresses data, and how it handles mixed-case filenames. Still fun, though.]

Hear my words, and know them to be true:

"Adjust the unlabeled knob to the unmarked setting, then press the unspecified button an undocumented number of times. Fixes everything."

I’m only half-kidding. Sadly, it always seems to be worth the effort. This time, it was to replace the CentOS server that kept locking up in less than 24 hours under the stress of incoming syslog data from 80,000+ hosts. Admittedly, syslog-ng is partially at fault, given that it leaks about 20 file handles per minute, but you wouldn’t expect that to cause scary ext3 errors that require a reboot. The BSD ffs seems to be more mature in that regard, although its performance goes to hell fast unless you turn on soft dependencies.

[Update: Oh, and to be fair, I should mention the downside of this, which is simply that adjusting the right knob to the wrong setting (or vice-versa) will kill everyone within thirty yards of the server.]

[Update: an old interview with Gardner has been reclaimed from the dust.]

Age 95. If you don’t already have his books, go buy some. Somewhere, I think I still have a large pile of xeroxed copies of his old Scientific American columns…

If you have any interest in games, magic, recreational mathematics, or a reality unencumbered by pseudoscience, you should already know how much he’ll be missed.

I wish to state that I am intensely jealous of my sister at the moment:

Found out today that I have to go there on Saturday for work...

I sent her a pop-out map, the excellent (and out-of-print) Little Tokyo Subway Guidebook, Not Just a Good Food Guide: Tokyo, Fodor’s Tokyo, a Japanese phrasebook, a Suica card (the penguin on the card was a nice bonus), and some pocket change.

It’s a short trip, and mostly business, but she’s got two free days, so I made sure she was loaded for bear.

I also emailed her the following picture to print out and carry into grocery and convenience stores:

The knee, it jerks

So I bought a book on the opening of Japan. Maybe I’m reading too much into this, but the author leads off by explaining that Pearl Harbor was a healthy psychological reaction to the deep wounds inflicted by Commodore Perry’s black ships and the arrogant American imperialism they represented.

I’m dying to see how he explains Perry’s culpability in the conquest of Korea, the invasion of China, the germ warfare, the comfort women, and all the other “healthy reactions” of poor, traumatized Imperial Japan.

Now it’s certainly possible that the rest of the book is an even-handed treatment of the events on both sides, well supported by the historical record, but somehow I doubt it.

Happened to wander through San Francisco’s Japantown today, and found something nice in the mall. Not for sale. 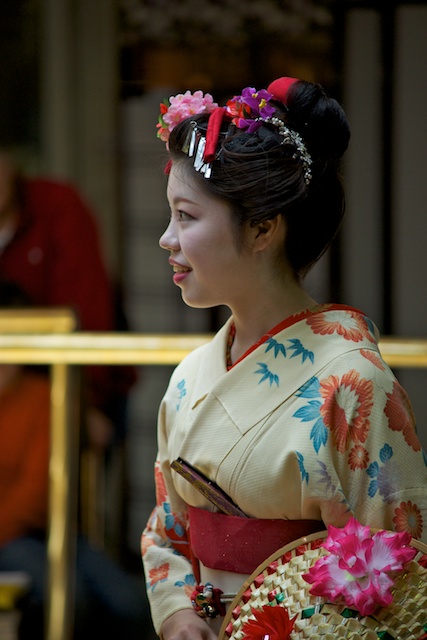