heLOVEnus continues to taunt fans with pictures; there’s a new album, you just can’t have it yet! 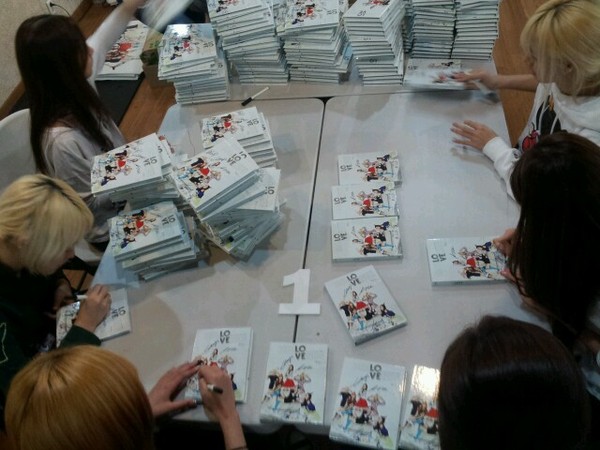 I’m a bit puzzled at the moment. Usually CD releases in Japan are even more overpriced when they’re imports.

You’ve been in Japan too long, and apparently you’ve even been hanging out in the Hello!Project Wardrobe Dungeon. Please go back to Korea for a while to escape the evil influences that led you to strap feather dusters to Hyoyeon’s hips. And speaking of shape-distortion, did you really put Sooyoung in jodhpurs and fun-fur shoulder pads? And, and, … look, just flee while you still can.

Did someone order catgirls?

Turn down the volume, unless you reallyreallyreally like autotune, and try not to have a seizure from the frantic edits. Your reward will be 4 minutes of playful Korean catgirls.

Okay, neither should Japanese girls (or, well, anyone, in any language), but somehow it’s particularly bad when the gratuitous rap break in the middle of a bouncy pop song is delivered phonetically.

Also, why such harsh autotune in a video that’s full of cuddly cuteness?

And is it just me, or does Hyuna look like a tiger cub in a room full of kittens, particularly in the dance scenes?

And why, since it sounds like very-nearly-17 SoHyun is the only one who actually speaks Japanese, does she get so few lines?

Sorry, girls, but the awful rap and autotune will keep me from buying your albums, because I don’t know if I’ll be able to listen to them without pain; I’ll stick to watching the video with my hand over the mute button (not a euphemism). Hyuna’s solo effort Bubble Pop, on the other hand, is pure eye/ear candy.