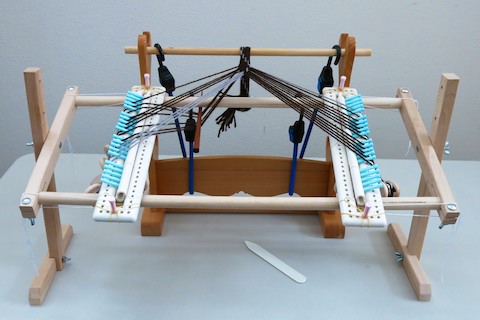 15 inches high, 26 inches wide, 16 inches deep. These are terrible dimensions for a Takadai, but they work pretty well for an idiot’s makeshift version: the Bakadai. The braid is coming out nicely, at least; it’s 25-strand Tsune-gumi (3/3 twill), done with a single strand of cheap medium-weight acrylic yarn per bobbin, in a simple zig-zag pattern. 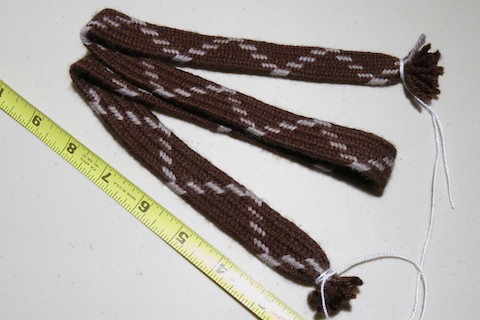 I’ve had to rebuild it several times already, as I discovered where the stresses were (version 2 included a 4-kilo kettlebell for stability…). The latest version added sandpaper on the takeup bar, to keep it from unwinding the finished braid every time I pull the shed open to pass a bobbin/shuttle through; a real takadai uses a ratcheting mechanism, but I didn’t have one laying around the house, and the only tool I’ve used so far is the saw blade on my Leatherman, to cut the dowel to size.

The key components are the 8 sliding koma and their frames, which are constructed out of two sets of the Martha Stewart Knit and Weave Loom Kit, which I found on sale on Amazon for $20. Side note: I couldn’t get it to work well for weaving or single knitting, but I did make a decent double-knit scarf before I tore it apart to use for takadai parts. It’s a decent kit, but much better at $20 than the current $33 or the retail $45.

The other parts are a cheap lap scroll holder from a craft shop, a three-tier sword stand that I don’t need while my swords are off being polished, two short lengths of dowel, a bungee cord, a “bone” folding tool, a chopstick, three little strips of sandpaper, some gaffer tape, and some rubber bands and string. And a bunch of weighted bobbins, which I already had from my Marudai. 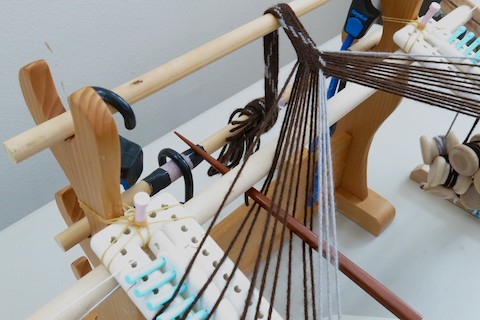 (note that the uneven thread spacing and the camera angle make it look like I’ve only got 2 threads under the chopstick at one point; there are actually 3 there)

If version 6 holds up well, I won’t make any significant changes to it [okay, there will be at least one more version; the sandpaper isn’t quite enough to keep the weight of 25 bobbins from gradually unwinding the takeup bar]. Instead, I’ll focus my efforts on designing parts with OpenSCAD to be milled on a Shapeoko 3 in the Spring. I have two sets of plans, from Rodrick Owen (with errata) and Carol Franklin, and my experience with the Bakadai has already given me a few ideas that will simplify the milling.

The first thing I build will be a better-proportioned Chibi-Takadai and a set of smaller bobbins, with only the top sides milled to keep it simple. The bobbins will have to be done in two parts and glued together (with washers for weighting), and the koma will have to sit at an angle rather than running in a track; that works well on the Bakadai, and will be even better with purpose-built parts.

[Update: for version 7 I replaced the takeup bar with a 1-inch dowel, the largest size that just fit inside the rubber hooks of the bungee cord. The tension is perfect, and it didn’t unwind at all when I made another Tsunegumi braid. The only remaining modification I need to do is put longer leaders on my bobbins.]

Suddenly, and I mean less than two minutes after I had used it successfully, the offline blogging tool I’ve been using forever started throwing XMLRPC errors. Support for it was abandoned years ago, so I haven’t looked for a replacement until now.

MarsEdit let me submit an edit to the previous post, so let’s see if it makes a new one successfully, and to double-check the encoding, I’ll insert some kanji: 漢字.

Now for a picture below the fold:

Asuka Kishi is a very popular model in Japan, which means she spends a lot of time wearing swimsuits and lingerie in front of cameras. This is a good thing.

(NSFW below the fold; honestly, she’d be BSFW fully clothed)

I would pay an extra $N/year for a Really Prime service which included the feature “will not use USPS for shipping”. Every other carrier you use is either on-time or early, but I get things faster from Amazon Japan than when you do “two-day” shipping via USPS.

You seem to assume that if a package is processed at the local post office in the wee hours of the morning, then it will manage to reach my office 0.7 miles away before the end of that same business day. Sadly, it ain’t so. They might manage to make it there by 7pm, but they’ll just cruise on by, because they know the front door is locked. If they’re busy, they won’t even do that, they’ll just wait until after 8pm and mark it “business closed”. Or both, turning it into a four-day delivery.

I thought they were a good deal when I paid nearly twice that at the beginning of December, but damn.

Gosh, could this be spam?!?

Hmm, I wonder if this email, sent to my Amazon email address from someone at “netvigator.com”, could be less than 100% legit:

The link goes to jsyxzx.com, registered in Hong Kong, but I think most people will catch on before they reach the point of clicking on it…

The new interns are fitting right in, I see. 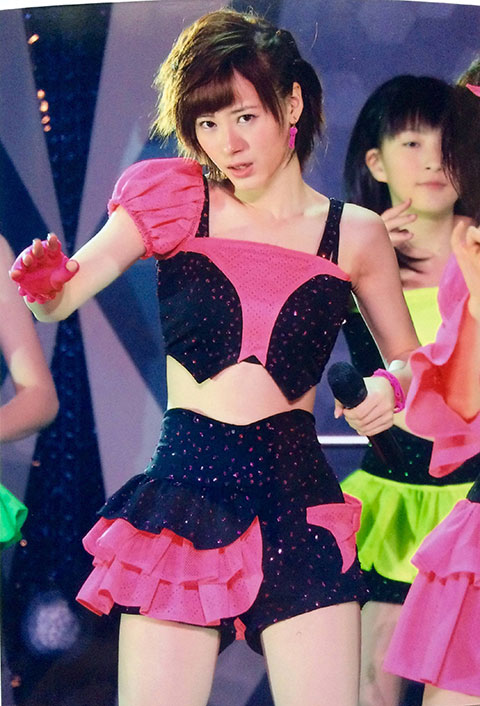 [It’s been one of those Mondays. Never mind the now-deleted package drama; that was just the warmup for the work day. First came the co-worker who still doesn’t understand the urgent request he made, then my Mac’s video card went out (saved, at least for now, by an SMC reset), and then… forget it, here’s Fuji, from The Kimono Gallery on Tumblr.] 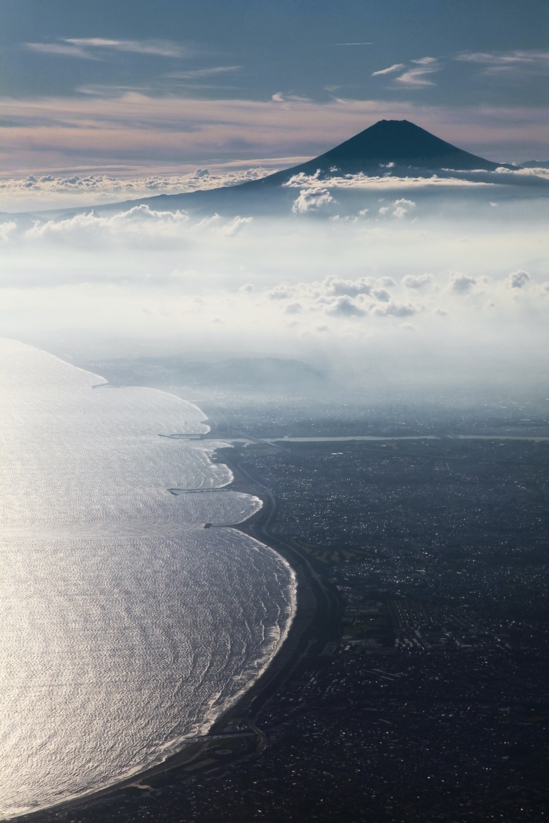 I did an image search for antique treasure boxes (骨董宝箱). 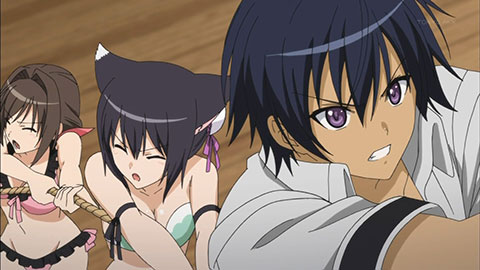 (this is probably why…)

My mind conjured up a rather horrible image of the events that led to this recommendation:

This one kind of made sense, though: 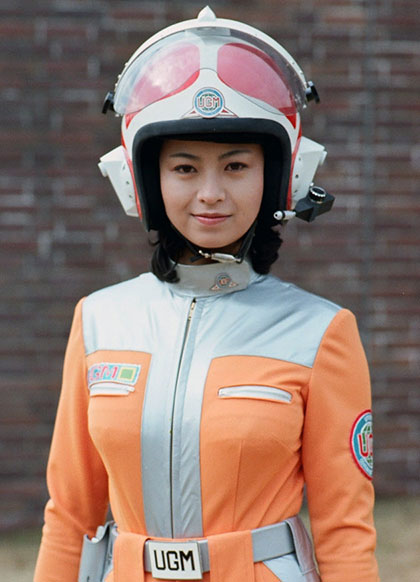 More from the Ultraman 80 era here (including some nudes). Still active as an actress.

Not to be confused with siscon, lolicon, or any of the other fetish-con constructs in Japanese (in which case it would be “tiger complex”, which could get messy fast). No, I was suddenly curious to see if the original Dirty Pair novels used a kanji compound for the “Trouble Consultant” job title used by Our Heroines. Nope, it’s トラブル・コンサルタント, or トラコン for short.

Update: scrolling through the vocabulary list generated by my scripts, I was amused to discover that the words ホットパンツ and ジェノサイド appear exactly the same number of times. In fact, you could pretty much subtitle any discussion of the Lovely Angels with the phrase “hotpants and genocide”.

From the comments over at According to Hoyt, a simple, elegant statement about Our Would-Be Overlords:

"A multiculturist would bring bring marshmallows to a suttee."
---Timid1