Anyone in Kyoto right now?

Oh, damn; it seems that part of my Amazon order didn’t ship right away, and I bought so much stuff that I didn’t notice. It arrived today, at the Lawson Karasuma-Gojo, and is being held for pickup.

[Update: got a volunteer. Also, it looks like the package arrived while I was still in Kyoto, but my ISP had a hiccup that kept me from getting the notification in time; now that I have all my email, I see multiple “hey, it’s waiting for you” messages]

In no particular order:

Portrait of a happy man...

Why is this photographer smiling? 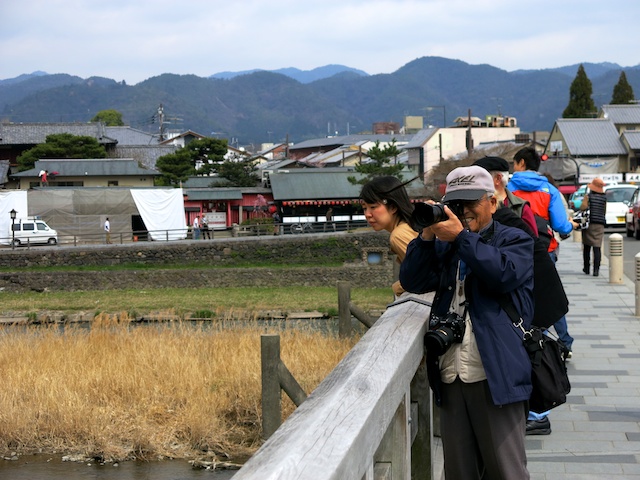 When we opened the carefully-packed bottle of snake booze that we’d ordered through Amazon Japan, the damn thing was upside down in the bottle. I just got email from her reporting that she’d managed to coax it upright before wrapping it back up for delivery. 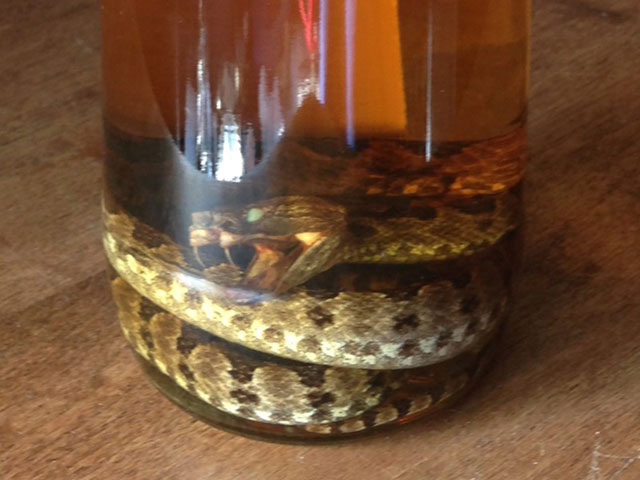 Our last night in Kyoto

The grounds of Nijo Castle are lit up at night for cherry-blossom viewing. It draws a bit of a crowd. 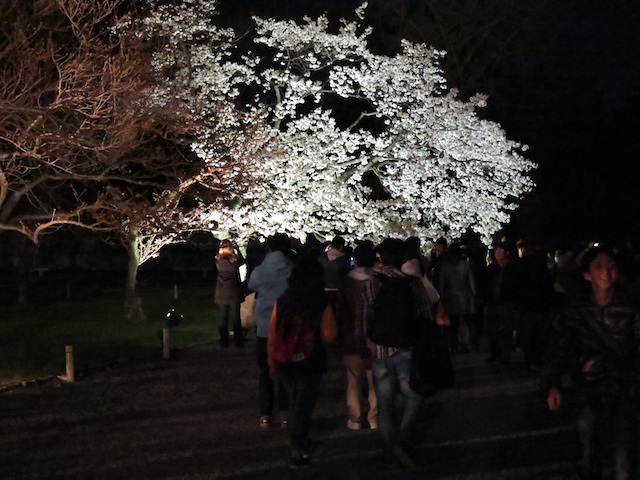 I took a picture of this cherry tree simply as an alternative to entering the sword shop behind it. 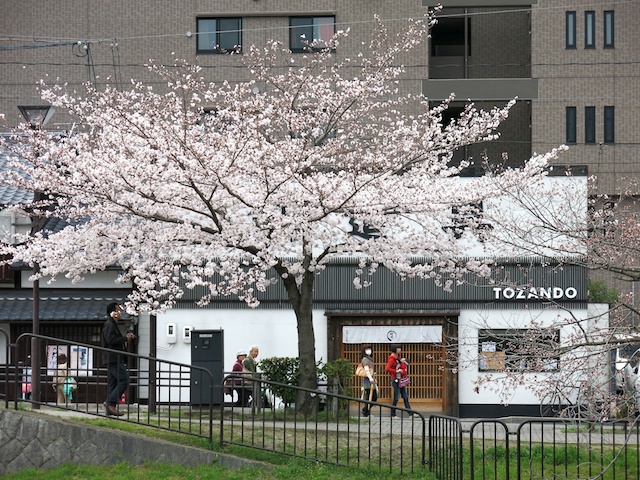 The hidden cost of cherry blossoms 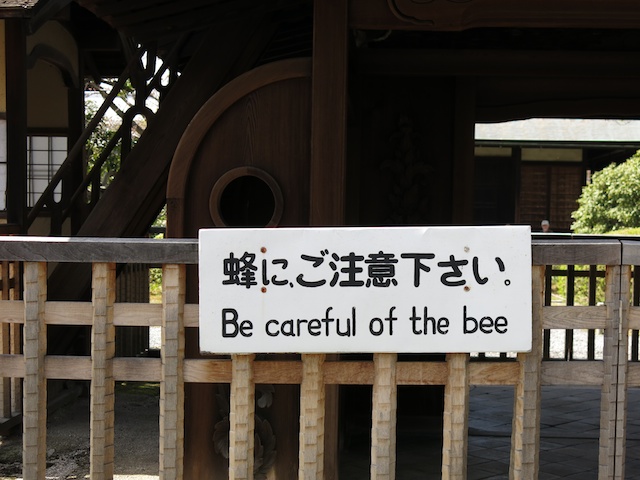 Fortunately, there’s only the one.

Not all blossoms grow on trees... 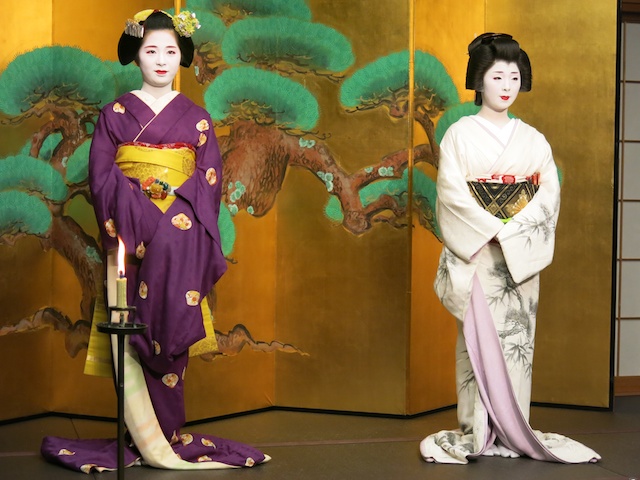 The Maiko dinner at Gion Hatanaka is not cheap, but is definitely worth it. If you’re not a fan of traditional Kyoto cuisine, however, plan on stopping somewhere for more modern fare later.

(I believe that the girl in white has graduated to full geiko status, having reached age 20; the other is still a maiko) 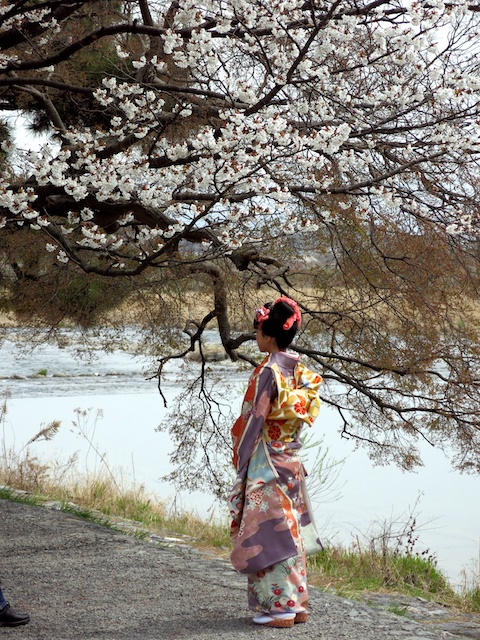 Not a cherry blossom picture

Sometimes all those white and pink blossoms filling the trees get a bit overwhelming, and you need to turn away, look down, and relax your eyes.

Take one drink if you picked "tiger"

One of the drinking games at the maiko dinner is “Tora tora”, a variant of rock-paper-scissors where the players are hidden from each other by a screen, and step out miming a character: samurai beats tiger, tiger beats grandmother, grandmother beats samurai. We had a large group, but every time someone picked tiger, the other person had picked samurai. 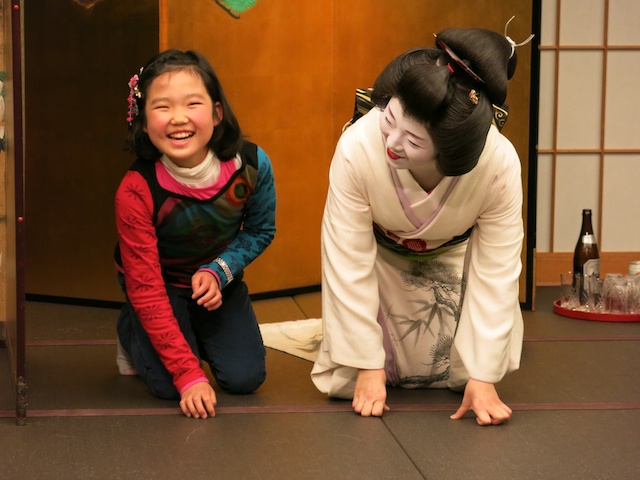 Fortunately, they had non-alcoholic drinks available for when the kids lost. 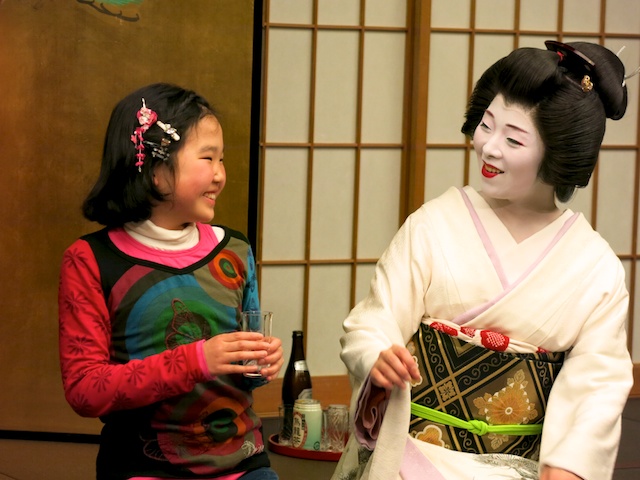 When an even-smaller little girl lost a round, the honorable samurai who’d slain her tiger generously gave her the winner’s prize and took the drink instead. 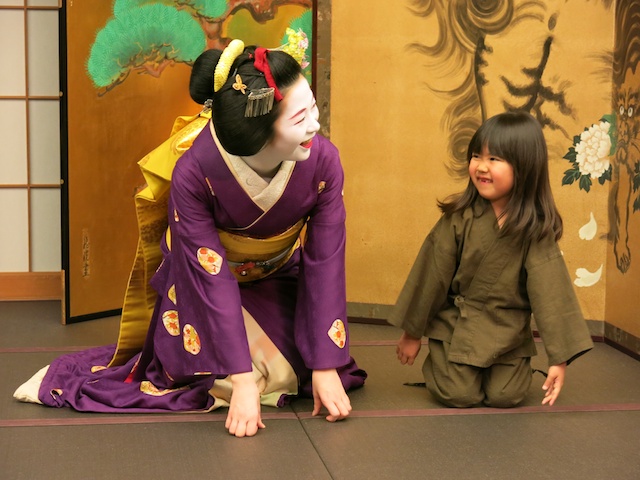 This is a hakama, most commonly seen today on martial artists and miko:

Culture for its own sake

Just in case you plan to set up a backyard saké brewery, here’s how you go about it, courtesy of the folks at Gekkeikan Okura Sake Museum. 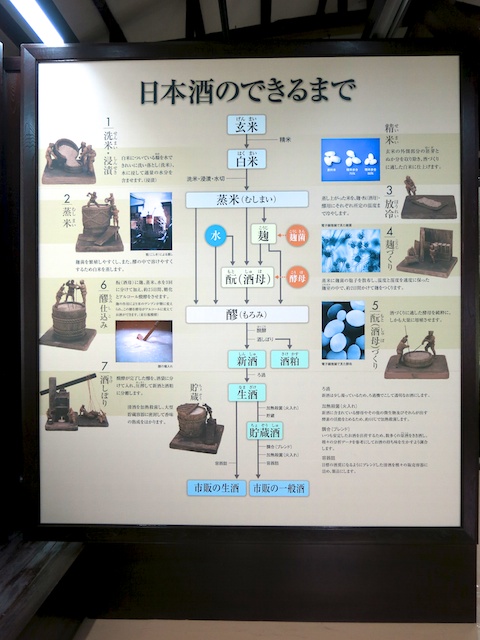 Readable full-size version here. The museum is a fun little side trip, by the way, with a gift shop and tasting bar. The “retro” saké they only sell there is sweeter than most current products; several bottles made it into our luggage, along with their plum wine.

Next trip, we’ll have to visit the Suntory Yamazaki beer and whisky museums, as Jeffrey Friedl did here and here. 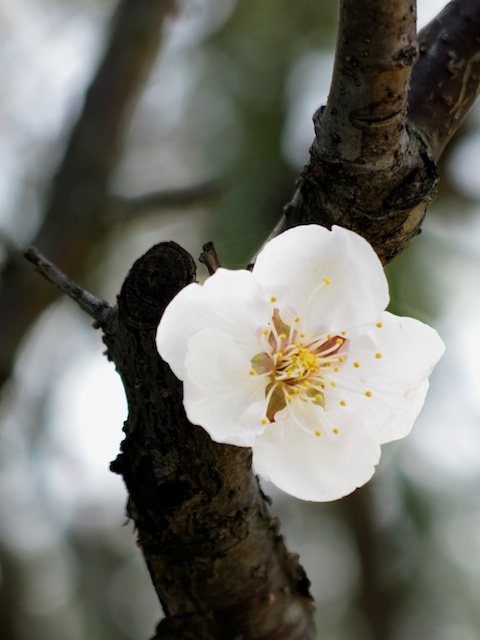 The Kyoto Botanical Garden had all sorts of blooms. Here’s one of the non-cherry blossoms: 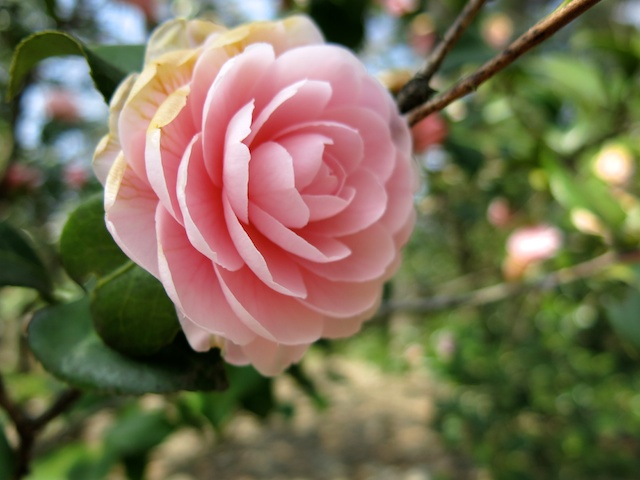 Just don’t ask me what this thing is…

It’s one of the laws of tourism. 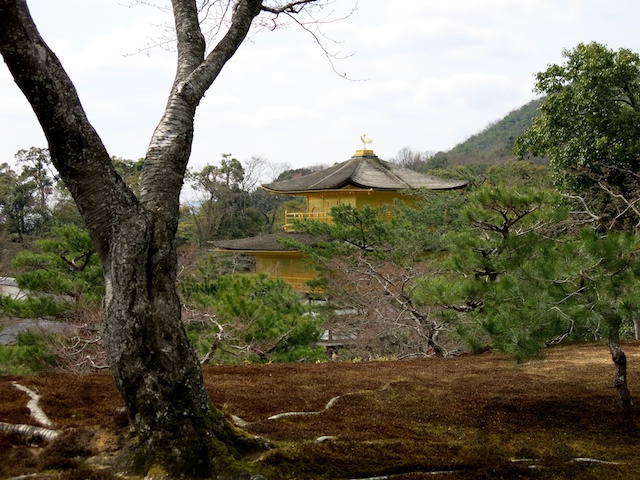 They just want their fair share of the crackers. 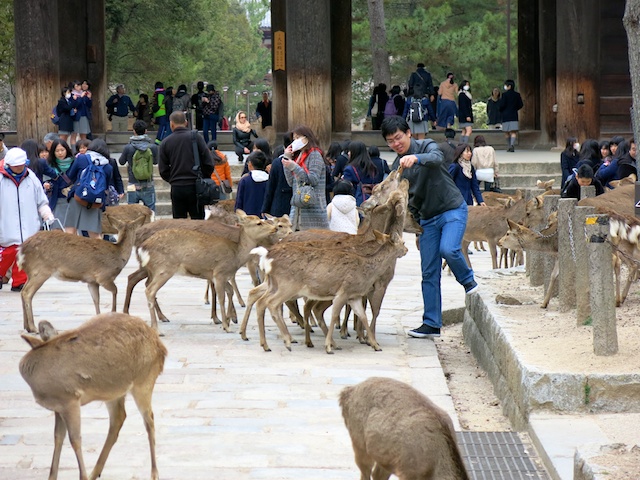 I do not want this. Using a smartphone app to remotely control a high-tech Japanese toilet is carrying things just a bit too far.

We only had time for a brief visit to Osaka Castle. That still took nearly two hours, since the place was filled with cherry blossoms and their fans. 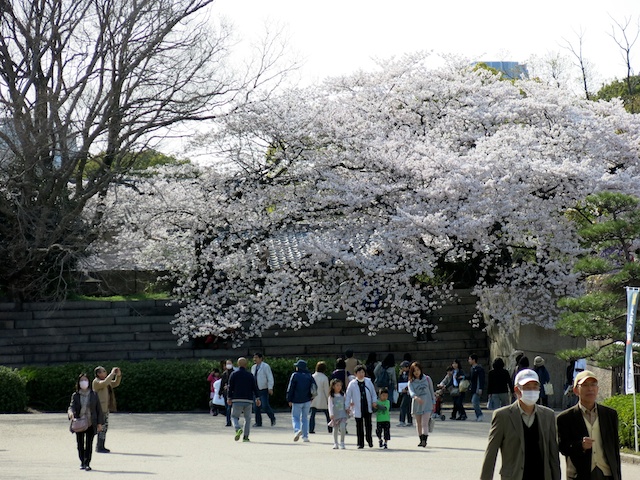 To be honest, the Luminous Kobe dinner cruise is a great experience, but not much of a photo-op. If you spend some time in Kobe, though, there’s plenty to see; next trip. 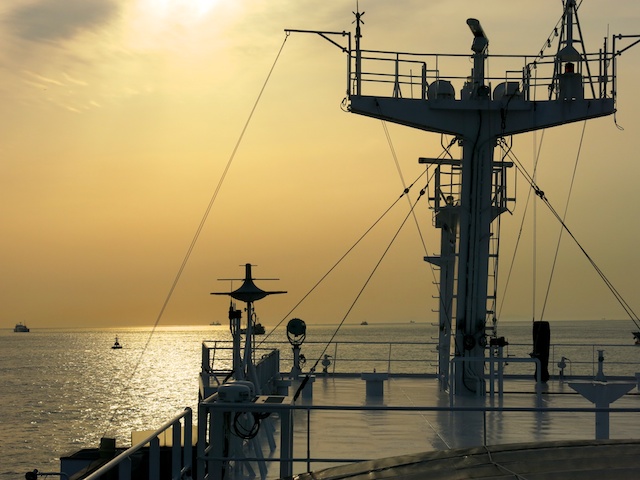 If you’re in Kyoto and looking for good Japanese-style kitchen knives, pocket knives, or woodworking tools, Minamoto no Hisahide has excellent stuff and reasonable prices. They’re in the Teramachi shopping arcade off of Shijo-dori, right around the corner from Nishiki Tenmangu shrine (which, by the way, is why the food/kitchen street that runs west from here is called Nishiki Market).

Aritsugu, not far away, is a high-end shop with excellent handmade knives and hammered-copper pots and pans. I don’t like anyone enough to buy gifts there, and I really couldn’t justify filling my luggage with heavy copper that would never get used, so I only window-shopped there.

[Update: I found the receipt, and the third knife shop not only wasn’t in the Teramachi arcade, it wasn’t even in Kyoto! No wonder I never found it again. It was actually the Ichimonji outlet on the Doguyasuji kitchen street in Osaka’s Namba district. We’d stopped in there the first day we were in town, so my memories were quite blurred by the end of the trip.] There’s another knife shop on Teramachi, where I picked up a very nice (and quite affordable!) damascus nakiri for a friend, as well as some of the standard-grade Higo no Kami pocket knives, but at the moment, I can’t find the name. I’ll have to hunt through my receipts.

I spotted this couple being moved around the scenic spots at Osaka Castle by a camera crew that included some pro video gear; they were likely shooting for a TV show (thanks, Jonathon) newlyweds. 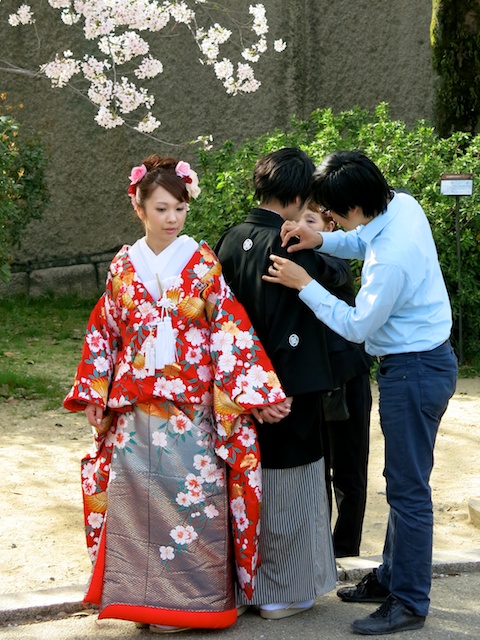 Recently, I’ve been getting a lot more infected-Excel Chinese spam than usual, and the majority of the Japanese spam has been bland one-liners with a link to a pay site, so I haven’t mentioned any of it.

This one stuck out for two reasons. First, there’s no URL at all, so no easy payoff for the spammer. Second, well, see for yourself:

Not only is it all written phonetically in hiragana, most words are scrambled, so that the first body line reads “konchini wa, misanan ongeki desu ka?”

It does not appear to be written by assistoroids, so I don’t think the alien catgirls have found my email address.

Just because she’s short doesn’t mean she’s willing to miss out on the scenery. 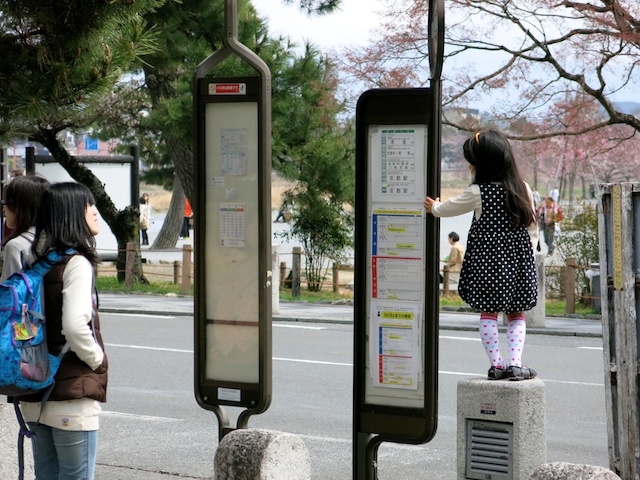 Reflections in the dark 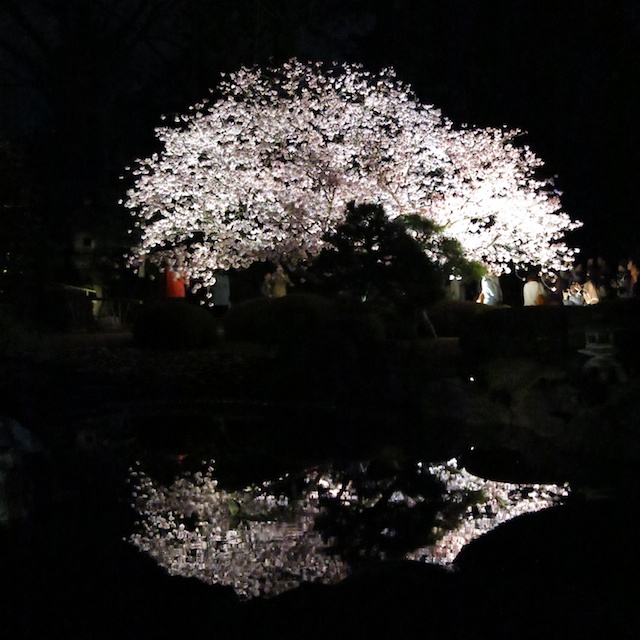 A quick crop of cherry trees in full bloom in a back street in Kyoto. 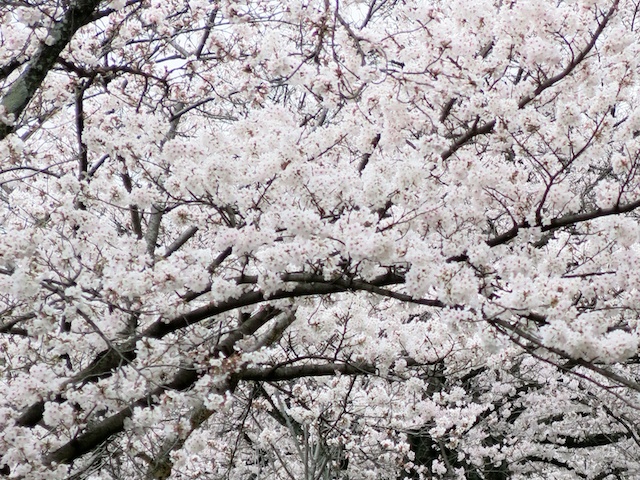 Full frame, with an older couple getting their picture taken among the blossoms. 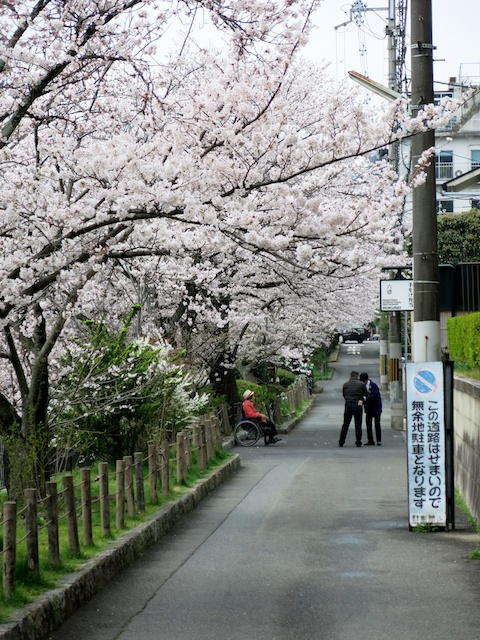 When the clocks on internal hosts are drifting out of sync despite the fact that everything runs NTP, make sure that the server everything is pointed at isn’t pointed at itself.

(unless it has an attached GPS or other source of correct time, of course, which this one didn’t)

Of Japan, but not in Japan

Small detail from a statue in the Asian Art Museum in San Francisco. He has a certain “my new social-media avatar” look to him, I think. 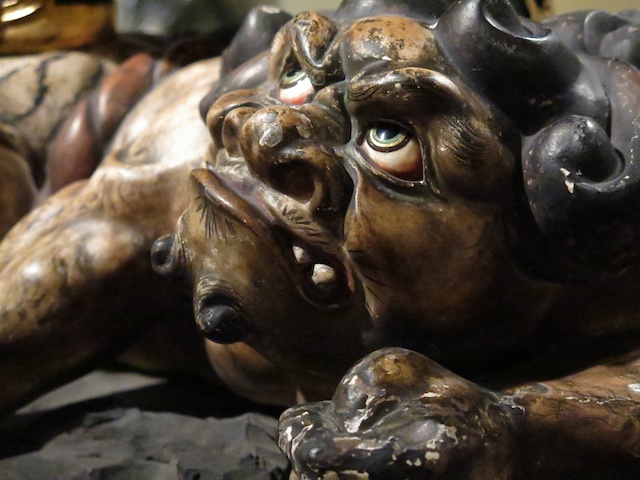 Do the models know?

At the creepy end of the Japanese photobook/DVD market, you can be pretty sure that the very young models don’t really know that being photographed in perfectly ordinary school outfits is fetish bait for middle-aged men, and that the photographers, editors, and stylists feel no urge to enlighten them. Ditto when they set up a scene in the kitchen and carefully adjust her string bikini to emulate the “naked apron” fetish.

But what about the ones who are all grown up?

All the hand-painted fans I bought at the little shop in Kyoto went over well as gifts, so naturally I wanted to make sure I could find the place again. I knew the name, Kyoto Eshi no Mise (京都絵師の店), and the exact street address, (京都市中京区寺町錦小路西入東大文字町288), but Google Maps couldn’t find it, even with the right kanji. (the address was particularly useless, because Japan)

Fortunately, I had backup. First, an old Sony GPS tracker that I carried almost every day, which would give reasonably-useful approximations of where I’d been at the time the receipt was printed; the accuracy would be low in a covered shopping arcade, but I’d have been able to use Street View from there. I didn’t need to do that much work, though, since I also snapped a geo-located picture with my iPhone, and that put me within 20 feet of the shop.

(“京都絵師の店” does find it in a regular Google search , but unless you put quotes around it, the store is buried under irrelevant results; with quotes, there are foursquare checkins, blog reviews, etc)

When in doubt, more blossoms 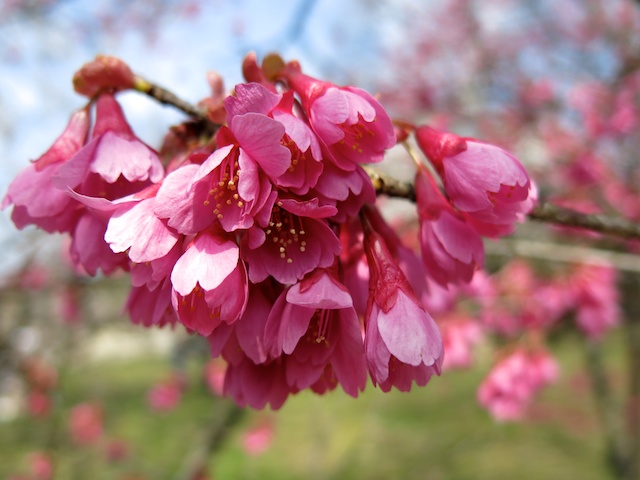 …and now I need to read Cat Tail Output!, because it turns out to be a spinoff series where the schoolgirl heroine’s deep dark secret is that she’s Melwin.

(or, “fun with obscure fonts that are hard to buy outside of Japan”)