Not quite a year ago, Steven found some rather puzzling geometry on the Bentenmaru’s bridge. As I continued to rewatch on a big screen tonight, I spotted something: the bridge isn’t just two levels, it’s two parts, and the upper part has a very good reason to be mobile.

In episode 7, around 10:30, the Bentenmaru is cruising at FTL on its way to a Perfectly Ordinary Mission (coughcough); the level that the captain’s chair is on is much higher than the other, and you can see lovely streams of hyperspace through the giant wrap-around windows. Just after the eyecatch, around 11:40, they come out of warp and go to battle stations, and the top half of the bridge sinks into the body of the ship, covering the windows and bringing the two levels much closer together.

So, the normal exterior corridors either reconfigure themselves with the upper bridge, or else are blocked off to lock down access. And, of course, battle stations is precisely when you’d want it to be easier for someone on the lower bridge to directly reach the upper.

It’s still possible they failed to animate it 100% consistently, but they definitely thought about it.

You’d think that a publisher based out of Berkeley, of all places, would take care with foreign names, so that when releasing, say, a translation from the Japanese (such as the newly-released The Spirit of the Sword by Nakamura (family name) Taisaburo (given name)), they wouldn’t do something silly like putting just his given name on the spine.

It’s possible that the translator confused them by consistently retaining the Japanese name order, but you’d think someone would have noticed at some point before it went to press.

So if you find yourself looking for a copy in a well-stocked book store, don’t be surprised if it’s filed under “T”. Or just use the Amazon link above…

Thursday I had my car at the dealer’s for a slightly-belated 60,000 mile major service, and while they were at it, they replaced the wheel bearings on the right rear tire, which had been making some noise. All under warranty, no big deal. I drove back to the office, parked on the side of the building, and all was well.

Saturday morning, while waiting for our instructor to show up at the dojo, another student noticed the head of a 3-inch nail sticking out of the right rear tire. He figured vandalism, because it went in nice and straight, as if pounded with a hammer.

This morning, when I went out to the car, I happened to check the new tires, and found this: 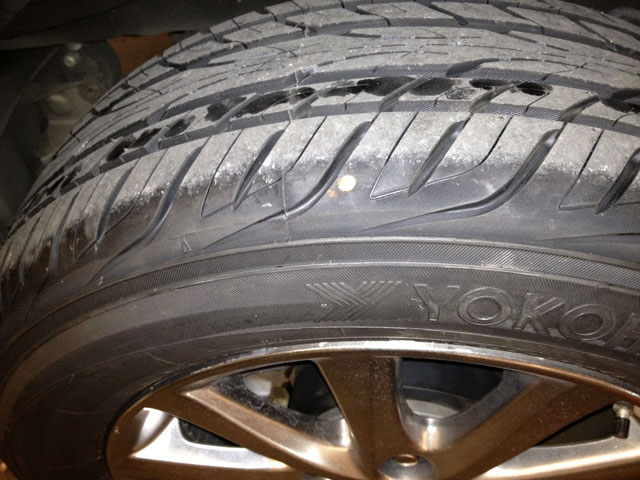 Same tire, same kind of nail, pounded in nice and straight. Guess where I parked yesterday? Guess which side of the office building has no lights, no windows, and isn’t covered by our security cameras?

The extended forecasts have been getting warmer and sunnier over the past few days, so we may get lucky. 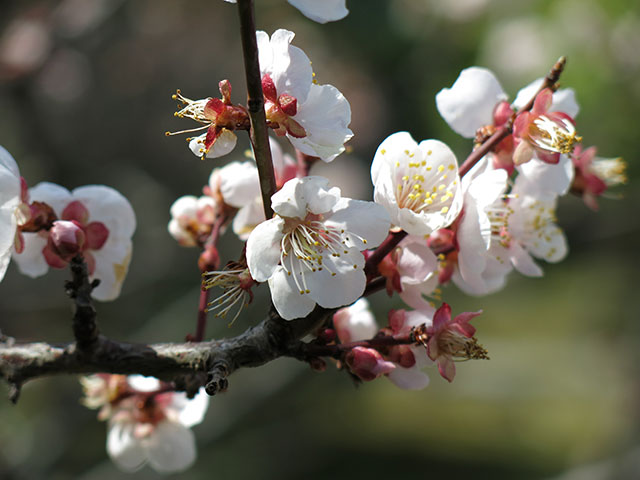 Straight from the camera at full size here.

For future reference, when you have a bunch of stuff shipped from Amazon Japan to the nearest Lawson convenience store, you need to enter two numbers at the kiosk, the 12-digit delivery confirmation number and the last 7 digits of the order number. The error page was a little kanji-heavy for me, and the girl at the counter didn’t know, either, so I had to make an extra trip.

Fortunately, convenience store locations are… convenient, and it was only a block from the hotel, across Karasuma. With a 30-day free trial of Prime (and business-class tickets that allow multiple heavy suitcases for free on the trip home), it was definitely worth doing. In fact, I just placed another order.

Sadly, it only works for items sold directly by Amazon, so the Marketplace dealer we ordered the snake booze from is shipping to the hotel, and I had to carefully parse their address and paste it into Amazon’s form. In a few days, we’ll see if it worked.

(by the way, blogging is painful because I’m running a VNC session over a VPN to my Mac at home, but I thought one sakura picture needed to be posted)

The purpose of a camera strap is to keep the user from dropping the camera. The cheap little rivets holding this piece of shit together fail miserably at this task. Fortunately the camera only fell a few feet onto asphalt, rather than, say, off a cliff or into the ocean.

Saturday, we did some shopping on Teramachi-dori, and one of my stops was at a shop that sold hand-painted fans. The girl working the counter was very happy with me, because when I picked one and she pulled out slightly different renditions of the same design, I usually said “yeah, I’ll take both”. I significantly increased her sales for the day.

Sunday, we went to the craft market at Kamigamo shrine, and as I was walking past a booth of glass jewelry, the vendor ran out and greeted me, and, sure enough, it was my fan girl.

Not on the menu 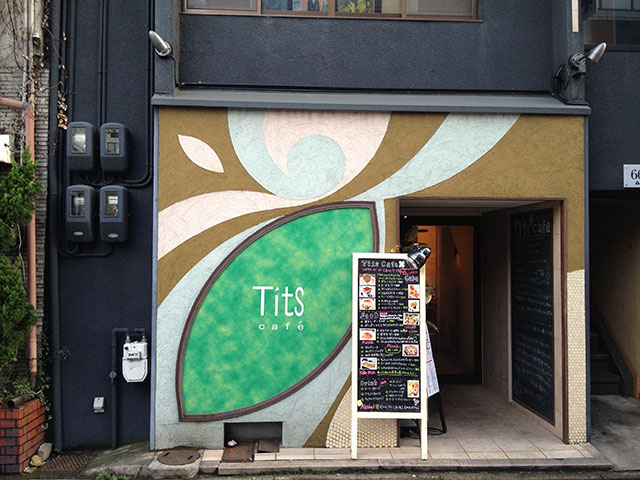 [trip report update: some rain, some colds, and some knee problems for my mom have adjusted our plans a few times, but still having lots of fun, and my sister was delighted to belatedly discover that there was a place with delicious katsu curry udon a few blocks from the hotel (one more reason the Citadines is the perfect hotel…). Katsukura Tonkatsu was a big hit with the folks, as expected, and now we need to search the kitchen district in Osaka for the really cool sake pitchers they had (the store they buy them from had only one in stock, and couldn’t order more for us). Lattonzolo D’oro was decent Italian, the dinner at Gion Hatanaka featured two pretty maiko, and my winning streak at their drinking games continues. Cherry blossoms are ranging from barely-budded to overflowing (or, in terms more familiar to anime fans, from DFC to Kyonyuu), making for lovely scenery. Kimono-clad cuties also provide lovely scenery, of course, although the rain cut down on that a bit.

I haven’t been into Osaka Denden Town at all yet, but finding out that book 17 of AsoIku includes all the short stories from the BD releases means that I don’t have to go looking for used copies. Other shopping means that it’s a good thing I didn’t load up on figures, etc. There’s one small item I still hope to acquire in Osaka, though; I doubt I’ll have time to search for a figure of Rio in a duck suit, but perhaps I can at least persuade the Duck Tour folks to sell me a Kappa-chan as a consolation prize.

No energy to transfer pictures of the sun setting on the bay tonight, but the cruise was quite pleasant, and the Spring Happy Steak Viking was delicious.

Sadly, Nunobiki Falls did not work out, because when the cab driver said it was near where he was dropping us off, he kind of left out the 3/4-mile hike down steep trails that Mom’s knees wouldn’t even attempt. However, it was quite lovely up there, and he did come back for us as promised. And it meant that we got to drive by Even More Cherry Blossoms, since Kobe was in full bloom.