Credit where credit is due

Apple’s latest update for the RAW camera support in Aperture and iPhoto adds several new models, and, rather surprisingly, a Minolta camera that was released seven years ago, the Dimage A200. This is a cost-reduced version of the A2 that I own, which these days is part of my book scanner.

These were great little cameras at the time, and the A2 in particular is an excellent studio/still-life camera, but there aren’t a lot of them available on the used market, and of course Minolta got out of the camera business a long time ago, so there’s no service.

Loanword of the day: Rippubaajin

Amazon Japan has a very different image of me as a customer. While I’ve overtrained Amazon US to the point that it uses the most tenuous and obscure connections to come up with recommendations, the Japanese site has no such difficulty. I get the occasional curveball after I’ve used it as a search engine for obscure words, but for the most part, recommendations are plausibly based on things I’ve actually bought.

In book 7, Eris’ slightly-ditzy mother misread her letter home, and got the idea that she was in a serious relationship with both Kio and Aoi. “Not that there’s anything wrong with that,” and Mom went so far as to reassure Aoi that Catian scientists had plenty of experience helping interspecies gay couples have children together. Cue blushing all around, and stammered explanations of the actual state of affairs.

Except… Aoi really is developing feelings for Eris that she doesn’t understand, and that her emotionless-killer childhood hasn’t prepared her to deal with. It’s a tangled-up mess of friend, comrade, big sister, little sister, rival, and, most recently, as she helps Doctor Dyureru give a feverish Eris a sponge bath, “wow, she’s hot”.

Where’s it going? No idea. At this rate, I think we have to wait for Eris to go into heat again for anything to happen in this relationship. Given that the good doctor grins to herself when she sees Aoi’s reaction, and also listens in approvingly a bit later as Aoi pulls back just before blurting out to Kio that she wants to be his wife, I suspect she won’t be providing any heat-canceling pills next time. And since Captain Kuune is also gleefully shipping this trio, Kio and Aoi will probably find themselves locked in a room with a horny catgirl and a week’s worth of food.

Note that despite my expectations that book 10 will have major plot-advancing action, as of the end of chapter 5 (of 9), Eris’ sponge bath is the most significant event.

“Not that there’s anything wrong with that.”

If you’re going to dress up as a samurai stormtrooper at conventions, try not to confuse every Japanese person who reads your banner. The nicest comment you’ll get is “it’s like the [bad] English t-shirts junior-high students wear”.

And I thought the Clear Keeps were bad… 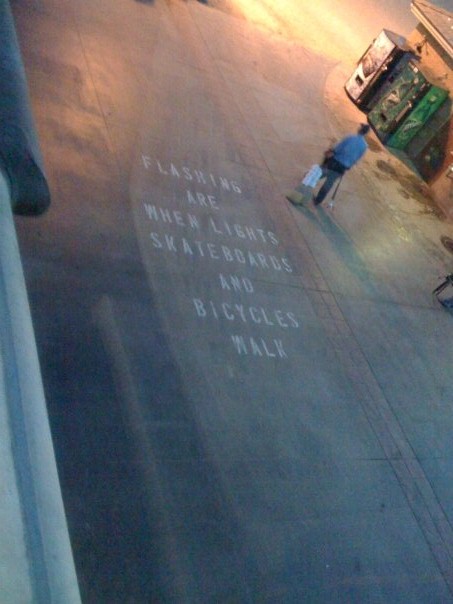 I guess the “F” stands for “Freddie”?

Thank you for finally fixing the bug in Safari that disabled Javascript mouseover events if you right-clicked on a link.

(before 5.1, you had to left-click somewhere else on the page to get them back; this also affected the automatic cursor changes as you moused around, which is probably why it got fixed)

Or, in this case, “Pool! Out of the loop!”, which explained how someone’s straightforward Python-based service had managed to open 350 simultaneous connections to the MySQL server in a matter of minutes, under very light load. Another one of those “glad we caught it in QA” moments.

[Update: finished, and while it doesn’t resolve the 30-day challenge, it does wrap up a lot of dangling plot threads, with a surprise at the end suitable for ending a season (should there ever be one…). Some of the threads don’t make a lot of sense, though, and I don’t think it’s incomplete understanding on my part; they just were never adequately explained.]

With two chapters to go, things are finally heating up. If they ever make a second season of the anime, it looks like book 10 can be the climax, and the reason is that Kio “gets a grip”. A very senior, and very scary, Catian official pushes him hard to defend humanity, and when he stands up to her, issues a challenge; if he fails, they’ll leave Earth forever and never come back. He has 30 days, and, fortunately, the help of some very talented women.

(actually, this was in the first half of the book, so technically the sponge bath wasn’t the most significant thing that happened, but I didn’t want to change the subject…)

Meanwhile, the opposition is planning a decisive strike, and for reasons of their own, two Dog deserters want to stop it. The gang is stunned when they show up and tell their story, and when Kio reports it all to Captain Kuune and asks if they should be trusted, she forces him to make the call. With a wink and a grin, she puts her faith in him. If it’s a trick, the lives of all her crew could be lost, so, y’know, no pressure. All he has to do is…

Did someone order catgirls?

Turn down the volume, unless you reallyreallyreally like autotune, and try not to have a seizure from the frantic edits. Your reward will be 4 minutes of playful Korean catgirls.

Saw a “news” article yesterday where someone attempted to prove his moral cleverness by showing the lack of a significant national response on the 10th anniversary of Pearl Harbor, and that what was written about Japan at the time was largely concerned with building up our peaceful relationship. Apparently he not only doesn’t understand the difference between Pearl Harbor and 9/11, he’s managed to overlook all the ways that we still, to this day, remember World War 2.

I have no idea what’s going on in book 11. That is, I understand the individual scenes, but have absolutely no idea where the story is going.

The latest bafflement is Jack showing up at Kio’s door and introducing herself (apparently for the first time) as a new neighbor, wearing her trademark barely-there cowgirl outfit and giving a completely different name that nonetheless has the initials JACK. This is minor compared to the literal catfight between two previously-unmentioned culture professors on a Catian space station, over who gets to go to Earth as part of the exchange program. And then there’s the teenage goth-loli MI6 agent who collects assistoroid plushies and just moved into the house formerly occupied by 6-chan’s friend Mahiro.

All of which seem positively normal when compared to Kuune holding a reception on board the ship (currently parked offshore from the new embassy) for a collection of Earth’s kami.

The four AsoIku drama CDs that were made before the anime (which can be seen at Geneon’s Embassy of Kya-thia stub page) obviously had different voices for the characters. Folks you might have heard of: Eris, Aoi, Manami, Jens (who ended up playing Sara in the anime), Maki, and Ichika.

[Note: this is one of those “braindump so I don’t miss a step when I tell someone how to do it” posts]

Let's say that you've come across a web site that refuses to serve up its content to people located outside of a certain geographical region. For instance, "Japan" (or UK for BBC streams, etc).

There are two basic ways to go about this: pointing your web browser at an HTTP/HTTPS proxy service that's located in Japan, or opening a VPN connection to a server in Japan. I chose the second method, in part because it isn't limited to web traffic (allowing you to do things like bypass your ISP's outgoing SMTP blocking), and in part because I already knew how.

My weapons of choice were Amazon EC2, OpenVPN (free Community Edition, easy-rsa, OpenVPN GUI for Windows, and Tunnelblick for Mac), and DynDNS plus ddclient.

…because it’s made with tako.

(actually, it looked pretty good on the cooking show, basically a small okonomiyaki patty, but I can’t vouch for the texture)

Finally had time to do some more reading, and the story remains chaotic. I’m currently about halfway through chapter 5 of 10.

For fun, I’ve been playing with Google+ recently. I remain invisible on Facebook, but the Circles design makes organized sharing more practical, and the various Google services also integrate nicely with my shiny new Android device, the Sony Tablet.

(oh, did I forget to mention the new toy? Full review soon, but the short version is that the most negative thing I can say about it is that you need tiny little fingers to retrieve the full-sized SD card; otherwise, it’s great)

Anyway, I ended up copying a bunch of the pictures from my 2007 Japan trip into Picasa, for when I get the urge to share a random picture.

This version was exported directly from Aperture, so it didn’t pick up the geotagging I did before Apple supported that properly. I still haven’t tinkered with merging existing geolocation data into existing albums, but maybe soon.

Several times now I’ve had to slow down and re-read sections of this one, because of either vocabulary overload or a grammatical dogpile that blocked understanding of a scene.

That is, after Arkamatsu (elderly Catian Earth-culture scholar with a special interest in crime, illicitly exploring Earth with the help of his old-fashioned assistoroid Igor) rescues Black Amarylis (teenage goth-loli secret agent with a cybernetic heart that gives her bursts of super-speed) from other spies, he requests her assistance in robbing a bank. Suddenly, they’re joined by “veteran bank robber” Annie (who looks precisely like the richest girl in the world wearing a domino mask, down to the cat-ear headband), whose partner (a child-sized figure wearing a paper bag over its head) rescues them all from an incredibly lethal attack by spies wielding Metalstorm launchers. Annie then leads them to a secure hideout (Ichika’s home and studio) to relax and plot their crime, gleefully incorporating late arrival Sara, who had finally stopped panicking when she realized that she could track down her wayward mistress by getting another assistoroid to locate Heihon.

The teenage cyborg goth-loli secret agent is the most normal person in the room.

What tone-deaf idiot wrote this?

A Brand New Brand
We've been eager to share something exciting with you, and now it's time:

Your Asian Art Museum sports a new vision, a new brand promise, and a new logo unveiled this week. We're reinventing ourselves to engage a broader audience.

Our Vision is to spark connections across cultures and through time, and our brand promises to: Awaken the Past, Inspire the Next. We'll use art to unlock the past and bring it to life, and act as a catalyst for new art, new creativity, and new thinking. We'll feature more contemporary art, often drawing connections to historic art in our collection. We invite you to experience the beauty and depth of Asian art and cultures, and to be inspired.

Our new logo reflects our Vision. It says we have a new perspective. It's bold and confident. And, it invites all to engage. (Did you know an upside-down A is a mathematic symbol for for all?)

Come see how we're starting to live our new brand.
...

It honestly reads like a letter to shareholders after a corporate takeover, not a museum newsletter sent to members and patrons. And the logo itself? Eh. Not bad if you’re making add-ons for Adobe products, I suppose.

I must say, I’m enjoying playing a Massively Zero-Player RPG; the best part is that I reliably outgear all of my friends.