The following sentence in Laura Rowley’s article on the student loan crisis should have been caught and fixed:

Indebted grads are also less likely to go to graduate school, delay getting married, having children and saving for retirement.

Sadly, I suspect that this is the “fix”, and the original was clearly written in English.

Go ahead, explain the benefit we’re getting from this. And then start running.

I know, I know, you had to cut some corners to get Cataclysm out the door on time, and I’m sure you intend to fix all (most) (some) of it as soon as everyone gets out of the hospital. And some of it is hard, like quest phasing, or getting armor to fit onto werewolf bodies (the Bravo Company headband is particularly bad, I must say), but some of it should be easy, and can be done by liberal-arts majors who would be happy to have a job working with prose above the level of “would you like fries with that?”.

Also, “lost on the throws of love”? What is this, a wrestling game?

How well do those red-light auto-ticketing cameras work? This well (emphasis added):

"On top of this, many tickets are never paid, partly because failure to do so does not result in a suspension of license but also because 67 percent of tickets were mailed to people making legal right turns on red."

Seiyuu who can sing: Haruka Tomatsu

Pete reminds me that I haven’t recently expressed appreciation for the talents of Haruka Tomatsu, who caught my attention not for her voice-acting in the popular anime series Kannagi, but for her insane cuteness (or cute insanity) in the music video for the OP.

Then I saw the ED…

Sadly, some of the songs she’s recorded for other series aren’t as good as either of the Kannagi songs, but they seem to sell well, and her pretty-seiyuu singing group Sphere seems to be successful. She makes a darn nice bikini model, too.

[side note: the embedded video neatly demonstrates why most fansub “typographers”/“typesetters” should be bound with duct tape, sealed in a barrel, and dropped off a cliff. The whole point of supplying karaoke-style romanized lyrics is so that someone can sight-read them to learn the words. Gratuitous animation (bounce! bounce!) significantly reduces readability. Use a crisp clean font, with good contrast and the entire phrase displayed at once, and save the special effects for your MySpace site.]

"Okay, is the light red or green?"

Many years ago, I was working setup at a trade show, and the network guy asked me to run down to the other end of the conference hall and check out a piece of equipment for him. When I got there, he called me on the radio and asked me what color the blinkenlights were.

Today, Dan Kaminsky has released a new iPhone/Android app that does real-time color filtering to allow you to compensate for these problems. I don’t have any compatible devices at the moment, but they seem to have matured enough that it will be worth buying one soon, and this will be a must-buy app.

Just because I haven’t complained recently, don’t think you’ve stopped sucking at your jobs. I mean, when even Ai-chan is having a what-the-fuck moment, you know it can’t be good.

Will he demand the bail money back now?

[Update: Not true. So the only thing that was really news in those leaked cables turns out to be no news, hopefully hastening the day when both Assange and Moore fade into well-deserved obscurity.]

Perhaps I should have titled this one “When attention whores attack…each other!”.

Steam is having a big Christmas sale. Recettear is 66% off. This game was worth full price, so it’s now three times as cool.

[Update: okay, now only 50% off, still worth it. The daily specials are daily, it seems.]

Of all the things to adopt from other games, the unskippable, uninterruptible cutscene that advances the “story” with wretched dialog and worse voice acting was a poor choice. I pay to play your game, not watch NPCs run a third-rate school play.

#2 would be the multiple Indiana Jones “homages” (ripoffs) in Uldum, which are not even a little bit as cool as you seem to think they are. The only reason they don’t make #1 on the list is because they’re broken up into several different quests, and sometimes you actually get to participate instead of just watch.

Honestly, if you’d spent less time scripting these abominations, you’d have had more time to make sure that all the other quests actually worked, especially the way-too-many vehicle quests with mechanics that you’ll only ever use once. You might even have been able to write some original story and dialog instead of relying on an endless stream of really lame pop-culture references. I’m sorry, but when a shaman tells me to “check out the big brain on Braddock”, I don’t laugh, I wince.

Chapter one is finally beginning.

But she's not named "Florence"

A werewolf in a dress? Of course she’s an engineer! 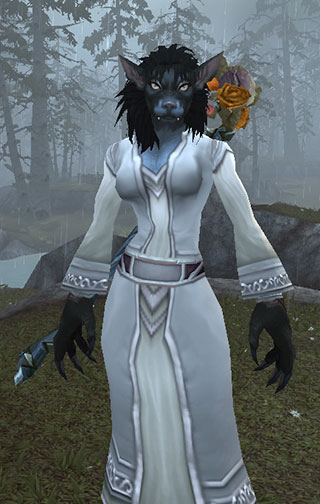 Sadly, engineering goggles currently look stupid on worgen, and it takes a long time to reach the point where you can build your own flying machine, but a wolf’s gotta have dreams.