Nice to see a box set with the OVA, but that’s not the fun part. This is:

Live-action adaptation of Noir in the works. I have mixed feelings about this, but as long as they don’t use that damn song, I’ll give it a shot. 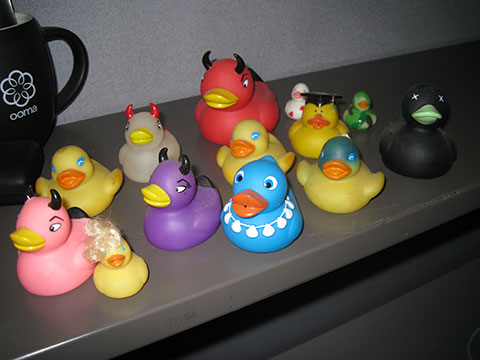 The invading forces haven’t reached my cube yet, but my folding screens and cardboard roof can’t hold them off forever!

(now, this one can invade any time…)

Once again, WoW gets the blame, but Eric has updated the site for the first time since July to say that he’s on the last page of the first issue.

Text-based captchas have gone from distorted words to random strings that once appeared somewhere online, often distorted to the point that multiple letters overlap completely. I’ve lost count of the number of times I’ve had to hit the “give me another one” button on popular systems, because the first several choices were impossible.

Today’s new low: “ryōhei,”. I haven’t tried to type this in Windows recently, but on a Mac, it can’t be done from the standard US English keyboard. You either have to look “ō” up in the Character Viewer, or switch to the Extended keyboard definition and remember that you compose it with Alt-A.