Are you sure you want to use this slogan on the look-but-don’t touch display model of your just-announced super-thin, ultralight laptop? 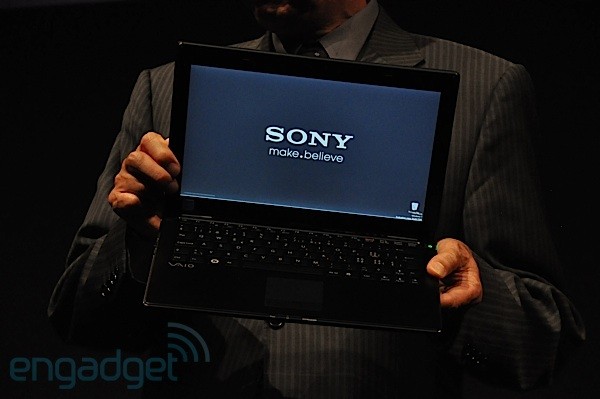 Give this girl a Lens!

Until recently, I hadn’t investigated the Japanese file-sharing networks. They’re Windows-only, they require some configuration that is only described in Japanese, and, of course, all of the titles are in Japanese, many marked-up with keywords that will make sense only to followers of 2ch.

I’ve already mentioned gekiyaba. There’s also お宝, which means “treasure”, but on file-sharing networks it means “special picture of a celebrity, either photoshopped or interesting only to people who can fill in the naughty bits with their imagination”. ポロリ usually means “shedding copious tears” (derived from the mimetic poro-poro), but online it’s “accidental exposure”, pictures or video clips where you can almost see down a blouse or up a skirt (so, if you go looking for Yuuko Nakazawa’s porori, you’ll find a song about crying, but for anyone else, you’ll find voyeur pics). Another one to watch out for is 激似, which means “I think the girl in this amateur porn flick looks exactly like my favorite idol, but you won’t agree”.

There are a lot of obvious keywords as well, and many people seem to apply them to every video they upload, no matter how irrelevant. Some are fairly reliable, however, like 巨乳, which means “huge breasts”. Not really my thing, but when you see a video labeled 巨乳めがねメイド after just discussing such a creature, well, it needs to be checked out. For Science!

When I reached the hot-springs scene where Yuki and Yayoi lick melting ice cream off of Sela’s body, I had to go look it up to make sure it wasn’t a doujin parody comic. No, it’s legit, and it’s ecchi, and in the final battle, every female character in the series is completely naked.

You’re a very cute, very busty, quite popular, just-turned-18 member of a popular idol group, with numerous sexy photobooks and DVDs to your credit, and this is how they’re advancing your career? You’re not kidding? This is not a parody trailer?

I believe you have chosen the wrong word for the activity described in this headline:

[aw, they finally fixed it (the headline, that is). shame, really]

Decpihering loanwords in Japanese can be a bit of a challenge. Today’s example is アン・ドゥ・トロワ, an-du-torowa. I don’t think I’d have gotten it if I hadn’t found a video clip of a song by that name.

…when they come for you. 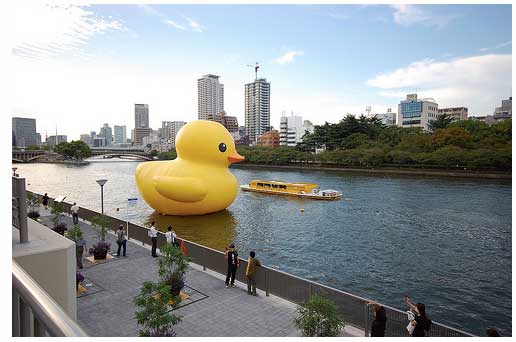 (and, yes, it’s actually called Rubber Duck Project 2009, or, locally, アヒルプロジェクト2009; both searches will pull up some decent pictures)

"But what kind of fools are they?"

The illiterate kind, the unintentionally honest kind, or the “we’ll say anything to get your attention” kind?

I just clicked on the new iTunes “Genius Mixes” button for the first time, and this is what came up:

No reading class this quarter

Given the state of California’s finances, I had my fingers crossed that my usually-small Japanese reading class would survive the inevitable cuts, but it turns out it was canceled for an unexpected reason: high enrollment in other classes in the department. There’s a contractual limit in how much one instructor can support, and my class was taught by the only salaried professor. Her time is already paid for, but each part-time instructor is a new cost.

Not sure what’s going to happen next quarter. Enrollment typically drops significantly in Winter and Spring quarters, as students discover that Japanese is the wrong language to study if you’re just trying to meet the language requirement to transfer into a four-year school, but that may not be enough to reinstate the class. She’s going to try to restructure it as an online class, but I’m not sure how it would work out. The group dynamics are a large part of what made it work, with people bringing in a wide variety of material and working together to understand it, with her guidance and cultural insight.

And I had some really fun stuff prepped for this quarter, too…

Someone just sent out email to the company saying “free cake shavings in the break room”.

My first response: shouldn’t cake shavings be served in a paipan?

In a surprise announcement that has left fans reeling, Satan (aka Koharu Kusumi) is leaving Morning Musume and Hello!Project, at the tender age of 17. Like fellow “graduate” Erika Umeda, she’s announced plans to become a model; unlike the 18-year-old Umeda, however, she has a stack of popular photobooks and DVDs attesting to her solo popularity, so she’s guaranteed some initial success.

This is on top of the mass exodus of the grownups earlier this year, and the curiously-handled retirement of Kanna Arihara, so it’s been a rough year for H!P fans, and with star-pimp Tsunku bringing ever-younger girls (6? WTF?) into his stables, I suspect it’s a bit nerve-wracking for the surviving members as well.

[Update: pimp-blogging reveals that she didn’t jump, she was pushed. That should make both fans and fellow members even more nervous about the organization’s future.]

Can I please have my one-click “show all tracks from this album” back? Clicking on the little arrow next to the album name takes me to the iTunes Store, which was always a pathetic and useless “feature”, but it used to be that alt-clicking on the arrow would take me to the album that I already own, thank you very much. Now it doesn’t.

It appears the only way to select all of the tracks from an album is to select one track, switch to grid view, and then double-click the album cover (which is either a blank square or an automatically-downloaded incorrect picture). And then switch back out of grid view, because it’s pretty-but-useless.

While I’m ranting, wouldn’t it be nice if the new Genius Mixes would show you the tracks it’s going to play, or allow you to rate the current song while it’s playing?

Over at Celestia’s place, she commented that she had the day off and not even her Japanese co-workers knew precisely what the holiday was. This led to the discovery of two rather intriguing clauses in the law governing national holidays:

国民の休日
Kokumin no Kyuujitsu, "national holiday", defined as a weekday between two holidays. (this year, the day between Respect The Elderly Day and the Fall Equinox)
振替休日
Furikae Kyuujitsu, "transfer holiday", defined as the first non-holiday weekday following a holiday that fell on a Sunday. (this year, Constitution Memorial Day was a Sunday, but the next two days were already holidays (Green Day and Children's Day), so Wednesday became a holiday)