Looking at the covers of this two-volume manga series (1, 2), I’m forced to ask, “older than what, precisely?”. 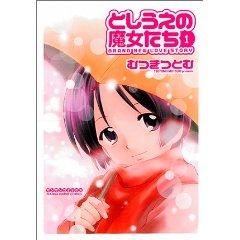 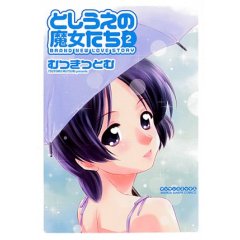 The folks at Akihabara News pass on the good word.

Here, for instance, is the deer park in Nara. And here’s Togetsukyou, the bridge that crosses the river in Arashiyama. How about Kyoto Tower, and the much more interesting Tokyo Tower. This could be fun…

[it looks like they went through Akihabara before all the stores opened in the morning.]

I’m not a big fan of celebrity gossip rags, even though I’ve been published in one. Between not really caring who’s been caught with who and hating the whole paparazzi sleazebucket style of photography, I generally don’t give them a second look.

The Japanese weekly magazine Friday is known to me only as the folks who ran “image-betraying” (read: having a private life) pictures that derailed (and in one case, destroyed) the careers of several members of Hello!Project. I’d never seen an issue, and wasn’t aware that they leaned more towards the Celebrity Sleuth model, interested as much in publishing posed shots of wannabe starlets as in stalking big-name stars to ruin them.

I know this now, because I spotted an issue at Kinokuniya when I was up in San Francisco on Sunday, and found a magazine I could not not buy.

A club that will have me as a member...

I would guess that somewhere in the neighborhood of 100,000 people have been qualified to wear this t-shirt. Approximately 99,950 of them paid for the privilege of membership, and the other 50 would have gotten the joke. Of those, perhaps a dozen will still remember it. 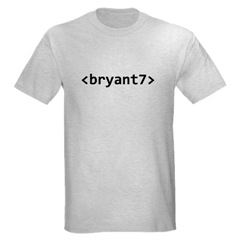 [and no, it’s not actually funny unless you’re one of those dozen, so I’m not going to explain]

[Update: Rory suggested a slight modification to improve the reference, and further decrease the number of people who’ll get it]

Don't try this at home, kids

Leave it to trained professionals…

…or, in this case, the idol group Idoling!!!, manufactured by Fuji TV for a weekly variety show. I think the wrestling matches were a fan request…

Warning: they do not lip-sync their songs on the show (live vs studio). You may have already figured this out if you watched the embedded clip…

Why is it suddenly too late for CADS?

For some time now, I’ve been writing Perl scripts to work with kanji. While Perl supports transparent conversion from pretty much any character encoding, internally it’s all Unicode, and since that’s also the native encoding for a Mac, all is well.

Except that for backwards compatibility, Perl doesn’t default to interpreting all input and output as Unicode. There are still lots of scripts out there that assume all operations work in terms of 8-bit characters, and you don’t want to silently corrupt their results.

The solution created in 5.8 was the -C option, which has half a dozen or so options for deciding exactly what should be treated as Unicode. I use -CADS, which Uni-fies @ARGV, all open calls for input/output, and STDIN, STDOUT, and STDERR.

Until today. My EEE is running Fedora 9, and when I copied over my recently-rewritten dictionary tools, they refused to run, insisting that it’s ‘Too late for “-CADS” option at lookup line 1’. In Perl 5.10, you can no longer specify Unicode compatibility level on a script-by-script basis. It’s all or nothing, using the PERL_UNICODE environment variable.

That, as they say, sucks.

The claim in the release notes is:

The -C option can no longer be used on the #! line. It wasn't working there anyway, since the standard streams are already set up at this point in the execution of the perl interpreter. You can use binmode() instead to get the desired behaviour.

But this isn’t true, since I’ve been running gigs of kanji in and out of Perl for years this way, and they didn’t work without either putting -CADS into the #! line or crufting up the scripts with explicitly specified encodings. Obviously, I preferred the first solution.

In fact, just yesterday I knocked together a quick script on my Mac to locate some non-kanji characters that had crept into someone’s kanji vocabulary list, using \p{InCJKUnifiedIdeographs}, \p{InHiragana}, and \p{InKatakana}. I couldn’t figure out why it wasn’t working correctly until I looked at the #! line and realized I’d forgotten the -CADS.

What I think the developer means in the release notes is that it didn’t work on systems with a non-Unicode default locale. So they broke it everywhere.

A while back, I was watching an H!P concert video at Scott’s house, and I said, “ah, it’s time for the trashy outfits”. Scott eagerly came over to take a look, and then realized that he had misinterpreted what I’d meant by trashy. From a certain point of view, I suppose you deserve some praise for always seeking new innovations in costume design, but seriously, I’ve got to ask.

JMdict combines the results of several research projects to determine whether or not a word should be counted as “common”. There are currently 15,572 words on this list that include at least one kanji character. Out of the 1,945 standard Jouyou kanji, 1,894 show up. The 51 rare ones are listed below:

Of course, if you’ve mastered the other 1,894, it seems pretty silly to ignore these, especially when there are 576 non-Jouyou kanji on the list:

What this little bit of late-night script-hacking really demonstrates (if anything) is that the Jouyou kanji selection is actually pretty good, with only a few “useless” characters, only one of which is taught as part of the 1,006 grade-school set (蚕 = silkworm). The Kanji In Context books also fare pretty well in this test; only one “useless” character is among the first 1,000 taught (舟, a variant of 船 = ship), and more than half are among the last 100.

"Then leave the rest to Omakase!"

I just set up an Amazon affiliate account, for those occasional links to cool products. After completing the application, one of the features was:

Omakase links will show an Associate's visitors what they're most likely to buy based on Amazon's unique understanding of the site, the user, and the page itself.

I don’t know that I’ll use it any time soon (first comes the way-overdue server upgrade and site redesign), but at least it’s thematically appropriate.

…four points define a wobble. Some months back, I left myself a note to buy the Manfrotto Modo Pocket camera stand when it finally reached the US. I had taken their tabletop tripod with me to Japan, but hadn’t used it much because of the overhead: pull it out of the bag, find a dinner-plate-sized surface to set it up on, take the shot.

I didn’t bother buying any of the other “quickie” mini-tripods that are out there, because most of them struck me as gimmicks first, stabilizers second. The Modo Pocket, though, looked eminently practical:

Small enough to be left on the camera while it’s in your pocket, with a passthrough socket to mount on a larger tripod or monopod. Usable open or closed. Solidly constructed, like most Manfrotto products. A design that derives its cool looks directly from its functionality. It’s even a nice little fidget toy.

What it isn’t is a tripod. If you put a three-legged camera stand down on a surface, it might end up at an odd angle, or even fall over if there’s too much height variation between the legs, but it’s not going to wobble. A four-legged stand is going to wobble on any surface that’s not perfectly flat, and is also going to be subject to variations in manufacture.

The legs on my shiny new Modo Pocket are about two sheets of paper off from being perfectly aligned, which means that it can wobble a bit during long exposures. Adjusting it to perfection is trivial, but even once it’s perfectly aligned on perfectly flat surfaces, it won’t be that way out in the real world.

It can’t be, because it has four fixed-length legs. This is a limitation, not a flaw. Just like it’s not designed to work with an SLR and a superzoom (it would fall over in a heartbeat), it’s not designed to replace a tripod. It’s designed to help the camera in your pocket grab a sharp picture quickly, before you lose the chance. I expect to get some very nice, sharp pictures with this gadget, and I don’t regret the $30 in the least.

I am only interested in women’s dresses as gift wrap. I don’t want to buy any, thanks.

"Welcome to the ISS Andromeda Strain"

“We are not responsible for any mutations that cause your virus-infected laptop to wipe out human civilization after your return to Earth. Unless you land in Berkeley, in which case we’re totally claiming the credit.”

from the BBC: "Nasa has confirmed that laptops carried to the ISS in July were infected with a virus known as Gammima.AG.

"The worm was first detected on Earth in August 2007 and lurks on infected machines waiting to steal login names for popular online games."

Thank you for feeding Yossie. In the latest Ongaku Gatas video, she no longer looks a little too much like the other person in this picture: 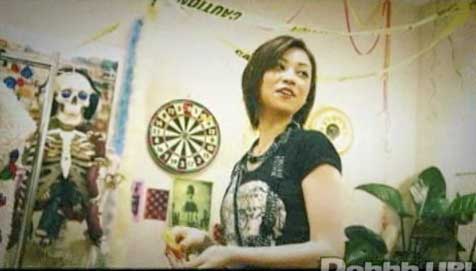 [and if anyone is wondering about the group name, Ongaku Gatas (“musical pussycats”) is the singing spin-off of the H!P futsal team, Gatas Brilhantes (“shining pussycats”)]

The H!P-Files: I Want To Believe

Asami Konno is all grown up, but still baby-faced. Enough so that despite knowing her age, I always feel like a dirty old man when I see her in a bikini. I still look, because I am a dirty old man, but that pouty little-girl face really brings out those “she’s half your age!” feelings.

Ogling Konno is less disturbing than, say Risako Sugaya, whose grown-up face and figure can lead to thoughts of consensual felonies, but there’s a good chance both are heavily enhanced by her stylists.

With Konno, though, I look at that body, and I really, really want to believe that it’s all OEM.

The advantage of learning to read a language is that you find out when they’ve been cheating on the translations.