Some poor soul, apparently a young polisci major, decided to use Nextdoor’s poll feature to ask about the upcoming election: 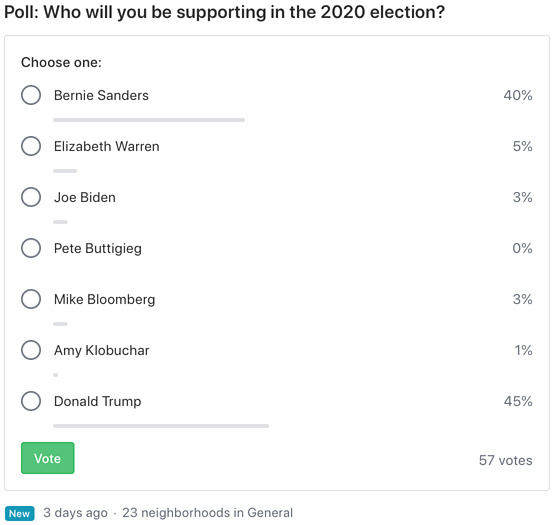 I suspect that if Trump weren’t winning, there wouldn’t be so many complaints in the comments about it “violating Nextdoor policies”…

Now 44% Trump, 35% Sanders, 4% each Warren/Biden/Buttigieg/Bloomberg, and 1% Klobuchar. Totally unscientific with a small, unrepresentative sample, so it’s at least as accurate as a professional phone poll…

The dog ate my impeachment

“We won’t turn in our homework until you agree to finish it for us.”

If it’s cool to punch “Nazis”, it must be downright awesome to choke Marxists. Hmmm, perhaps they should rethink this…

In Newman, Goergia, a tiny group of peaceful Nazis were once again severely outnumbered by ready-to-rumble Communists, assorted hangers-on, and bored cops.

The bad news? “There were only 10 reported arrests” (of Commie thugs wearing masks).

700 cops from 42 agencies, hundreds of protestors, and about 20 Nazis.

Just got a push-poll on my cellphone for a Democrat running for the state Senate. Tried to persuade me by supporting illegals and higher taxes, and opposing Trump and the NRA. You could say that it succeeded in pushing me, but not in the direction she’d like.

If 'the children are our future'...

Or just the latest example of “this is how you get more Trump”.

A lot of people are talking about turning the tables on the NRA boycotters by going to progressive bakeries and insisting they decorate cakes with pro-2nd messages. This is unlikely to work, since the sort of people who try to shut down Christian businesses for opposing gay marriage are unlikely to be able to run successful businesses themselves. You’d only be annoying people who aren’t really your enemies.

Fun to fantasize about, though…

“Hi, I’d like to order a special cake for a civil rights party.”

"Great! We'd love to have your business!"

“I want a big picture of an AR-15 with the words μολὼν λαβέ underneath.”

“Yeah, and surround the AR-15 with rainbow sprinkles, because it’s a gay little poodle-shooter.”

On Comey and Clinton

I’m finding it really difficult to care about Trump firing FBI Director James Comey. After going all-in for Clinton, he discovered at the 11th hour that evidence would come out that he’d acted as a partisan hack, and tried to weasel his way out of it. Claims that the timing is suspicious because of investigations into “the Russian connection” are all smoke, no gun. I’m sure that four years from now there will still be die-hard believers in this nonsense, just like there are still people who think Bush stole two elections; you can’t reason someone out of a religious position, so there’s no point in arguing with them.

As for Hillary Clinton, she wasn’t really running for President, she was trying to unlock the achievement “First Woman President”. After working hard to make Trump her opponent, her campaign didn’t actually try to beat him. Instead, they spent most of their time and money running up the score in states she couldn’t possibly lose, assuming that they had it in the bag and could afford to try to make it “historical”.

In the end, the weakest Democrat lost to the second-weakest Democrat, and since my vote didn’t even count at the county level, I am free to laugh at everybody.