This update has been piling up for a while, and since I’m too distracted to annotate each entry with pictures…

How many ounces in a lemon?

I found this grapefruit-sized lemon on the tree in my backyard. It looked perfectly healthy, so I brought it in and decided to find out how much juice it had inside. 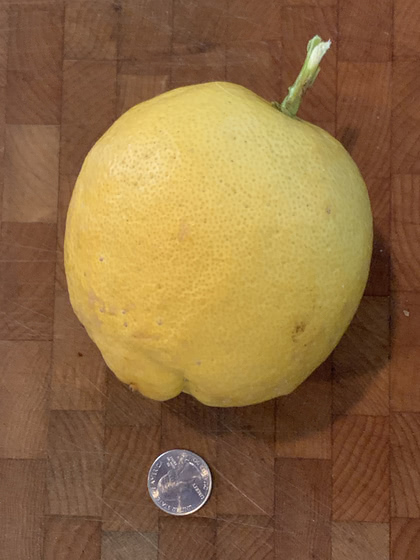 I dragged an alias of a Photos library onto my desktop, to remind me to re-process that batch of 2007 pictures in Lightroom sometime (despite the fact that there’s still no way to actually import the library in a sensible way, even with Avalanche (although they just released the Capture One conversion, so maybe they’ll finally get to it).

The result was two days of constant high CPU usage by Finder, with apparent side effects triggering Spotlight reindexing that created heavy WebKit activity that created heavy Cookie processing, etc. Fans were spinning up under the load.

Delete fancy symlink from desktop, problem goes away instantly. Note that this happened even though “show icon preview” is off for all folders, because it’s a crap feature that has little or no caching and has always been a huge performance problem for the desktop, and a non-trivial slowdown for other folders. It’s so bad that even the switch to SSDs didn’t make it tolerable, because so much other garbage got shoveled into MacOS at the same time.

As features are added, the slow degradation of core functionality increases. I now find myself deliberately setting alarms and timers with numbers that are unlikely to be confused with other numbers (“fourteen” instead of “fifteen”, because the device often hears that as “fifty”).

By the way, whoever came up with the “by the way” misfeature that spams me with suggestions for unrelated uses of the product at random intervals should be fired. Out of a cannon.

On the good side, it seems to have gained a longer memory of the last song I requested, so that three days later I can say “repeat the song” and correctly get Ballroom Blitz.

Only in theaters in June! Only if there are still theaters by June! Ryan Reynolds, Samuel L. Jackson, and a much-expanded role for Salma Hayek. Still wondering what happened to Free Guy? It’s been pushed off again, this time to August. 2021, still, for now.

The perils of girl_name in the land of the vanity domain

(with apologies to the memory of the sadly-late Tawny Kitaen, star of the hilariously terrible film The Perils of Gwendoline in the Land of the Yik-Yak; review: bored French boobs, and one honestly funny scene involving the three leads in a cage)

Someday, I’d love to find out how I got onto a bunch of Canadian political mailing lists as “Ollie Tabor”…

If you use Homebrew on a Mac, eventually you’ll hit the limits of their Github-based service and need to set up your own API token to reliably update the package repo. The documented solution for this is to simply sign up for a Github account, get a token, and hardcode it into your dotfiles so that every running process will be able to extract it from your environment and freely use your Github account.

Historically, at least. For some time now, it’s been possible to generate an API token that has no non-public permissions, and will only act to identify the user (Settings -> Developer Settings -> Personal access tokens -> Generate new token -> do not check any permissions boxes; also delete any old-style tokens on this screen).

This came up because I’ve been syncing my personal dotfiles over to my work Mac, and this was one of a dozen or so things that needed to be pulled out into a separate, non-synced file. When I looked at it, I decided it was stupid to do it that way even with a “safe” token, so I moved it into its own file:

I’d love to programmatically retrieve it from secure storage on use, but while Homebrew supports integration with the MacOS keychain, their documentation for this does not seem to exist outside of a snarky “do it this way instead” in a will-not-fix closure of a bug report (and, honestly, an unlocked MacOS keychain is at best only kinda secure anyway).

At one point I had things set up so that my Mac homedir was on its own small file system that lived in a TrueCrypt container with all the large directories linked from elsewhere, but Mac software had (and likely still has) so many problems with the concept of multiple file systems on a computer that it was more trouble than it could ever be worth. Full-disk encryption covers the same scenarios with less hassle.

When this is how the product is packaged for retail sale, shipping it in a non-padded brown paper bag is not adequate… 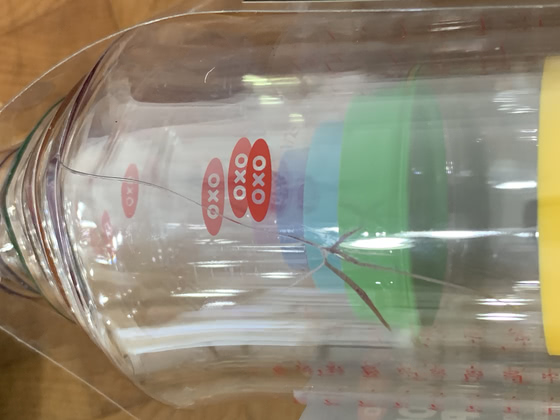 It used to be that you handled returns by boxing them back up and dropping them into a nearby Amazon pickup locker, but now they just give you a barcode to take into the nearest UPS/etc store with the unboxed product, and they scan it and box up a large batch of defective products all at once. So, they’re generating less shipping waste getting the product to you and getting back the products that got broken because they generate less shipping waste. Kind of a win?

They arrived Thursday, and after I immediately initiated the return, the replacements arrived Saturday. Also in a non-padded paper bag. But were somehow intact anyway. So, yeah, in the pursuit of Green-ery, Amazon has apparently chosen to replace common sense with blind luck.

File under baffling the fact that OXO designed a set of graduated cylinders for the kitchen which advertise milliliters without providing enough markings to actually be useful for that purpose:

The US side with cups/ounces/tablespoons/teaspoons has plenty of (accurate) markings, but they could have significantly improved the 60ml and 30ml sizes with minimal effort.

Monterey County jail population, cumulative statistics since the zombies first arrived from China: 7.4% covid-positive, 0 fatalities. This shouldn’t surprise anyone, since the same status PDF has consistently reported that 85% of the covid-labeled deaths in the county were 55 or older, and they further mask the fatality data by lumping together everyone from age 1 to 34 as one group (50% of the population, 2.6% of the deaths).

Having learned their lesson about hosting a drive-through vaccination event at a venue that has multiple entry points and plenty of parking, my second vaccination shot went a lot more quickly Saturday morning, as they had four parallel lanes from the moment you entered until you got the jab. They also had pre-printed labels with the date, vaccine lot, and location, rather than having to fill out the card by hand.

Things went so much better for them that they followed up the original “appointment times will be strictly enforced” with a “feel free to come early” email before noon.

The most interesting things about the event were two things I don’t remember being on the healthcare form I filled out for the first shot:

That was Saturday at 9am. 48+ hours later, contrary to the folk wisdom spreading about the second shot, I can detect no negative reaction. I feel pretty much the same way I do every day where I haven’t had human contact in over a year.

Closer to the target

Target has replaced their potentially-machine-damaging horrible clone Nespresso pod house brand with a different one that at least looks compatible. That is, they’ve replaced the “Archer Farms” brand of badly-made plastic/foil pods with the “Good & Gather” brand of correctly-shaped aluminum pods. No idea if the coffee inside is any good, between the fact that they burned me once and the fact that I’ve still got around 500 Nespresso-branded pods. 15% cheaper isn’t enough to justify the experiment.

Related to that link, apparently almost all of the bad Carnation Half&Half tubs in the bulk box I bought from Amazon were at the top. When I first opened the box, about 5% of the ones I grabbed were at least partially dried out, but I haven’t seen a single failure in weeks. I guess the shaking they went through in handling sorted the lemons to the top.

Fixed that for ya!

Trending on garbage-gargling Twitter: “ Terrorists continue trying to murder jews who refuse to give up and die”.

Also, widely reported: Israel bombs building containing offices of international journalists, including Associated Press. Not so widely reported: building was controlled by Hamas, who ran an intelligence operation out of it. (which, honestly, you could have guessed just by knowing that it was full of journalists…)

I’ve been watching Shingu recently, and went looking for information about it. Almost every reference is a stock overview that quotes the series marketing info from the original English dub release. Except for the review and too many words by Steven.