A few quick comments on my new Dremel 3D45: 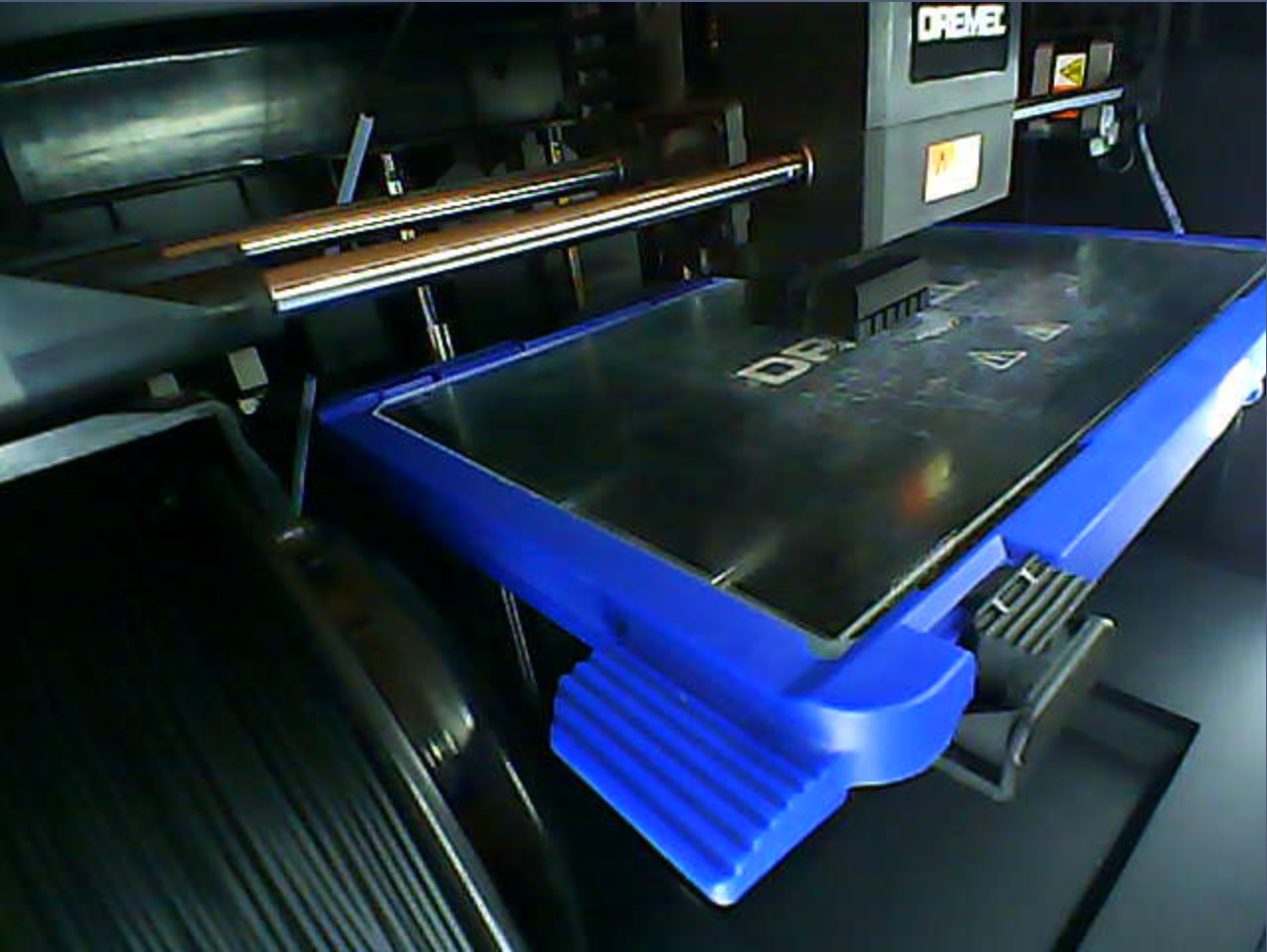 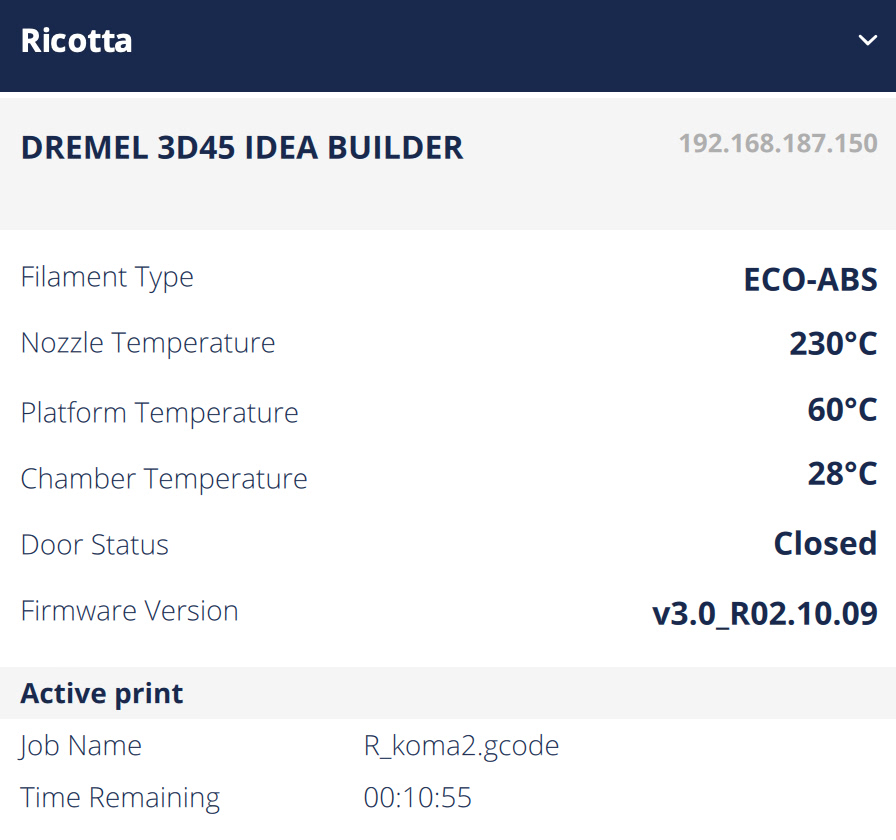 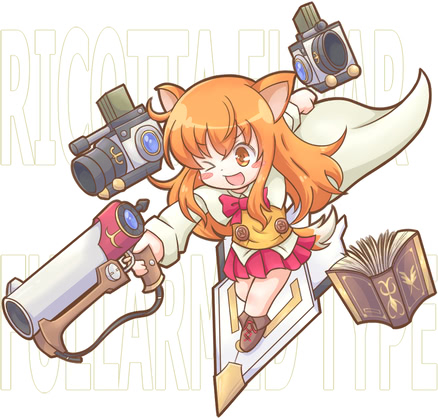 The proof is in the solidified pudding

My first print job was a redesigned koma for the baby takadai. 30 minutes at medium quality, 30 more minutes after I broke one of the pins off while remembering how to cleanly remove the supports (been a few years since I used one of these, and the documentation consists only of the words “use needle nose pliers”), and I had a part that fit perfectly and worked exactly as intended.

I had it print 9 more overnight, and woke up to a full set of koma much better than what that poor woodworker had managed with a router, a drill press, and not nearly enough time to get them all out the door in time for the conference.

Note that the 3d-printed design does something that would have been a real pain with a drill press: the front pin is exactly at the front, so there’s no double-width gap between pins on adjacent koma. I swiped the idea from the Braidershand design, which gets very close to the front of the koma with their pins. Little touches like that are why their gear has an 18-month waiting list. 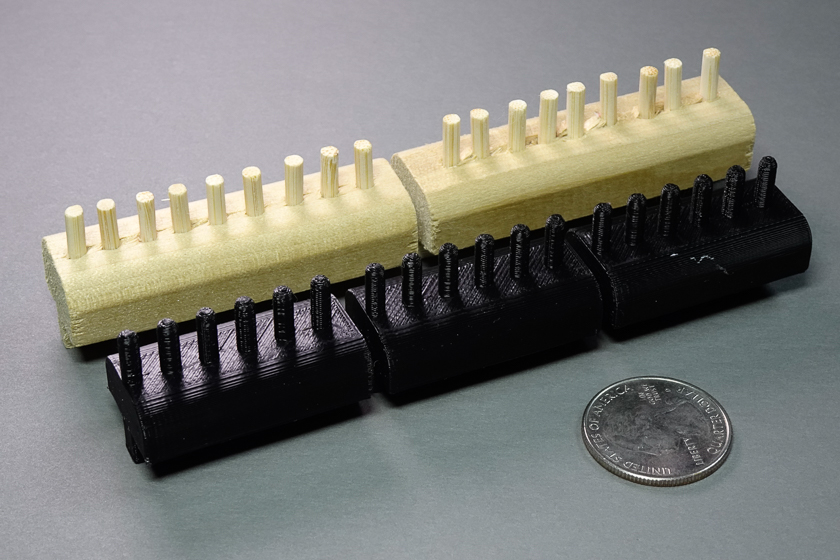 Second job was a gravity ratchet and pawl downloaded directly from the McMaster-Carr online catalog. I’m going to scale and recreate this design in OpenSCAD to use for the take-up reel in my next babydai mod. 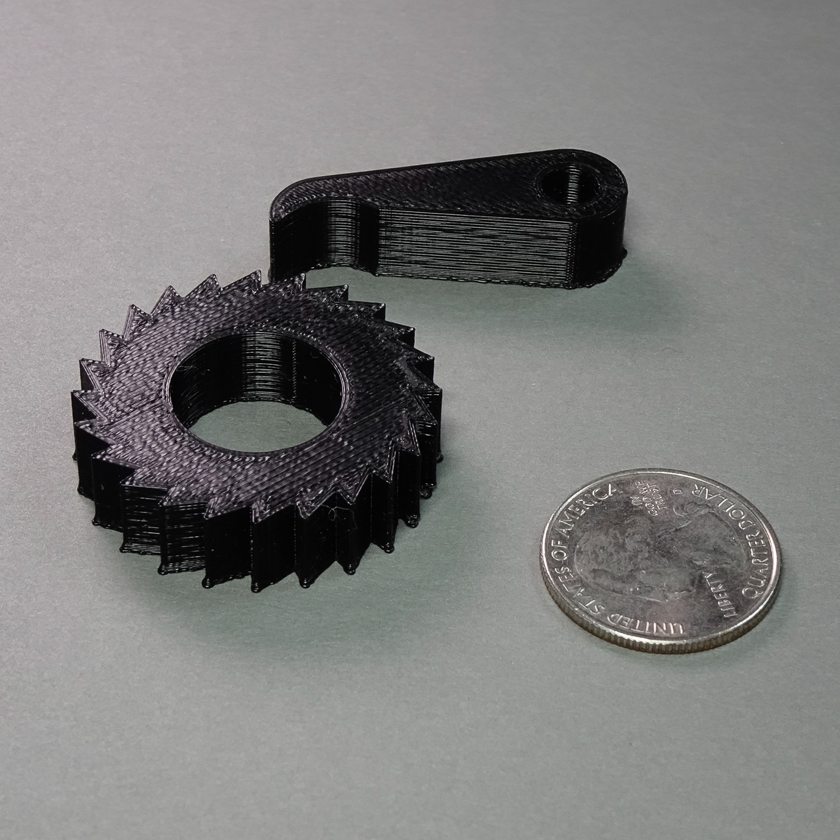 For the third job, I had a sudden inspiration about how to solve the problem of tensioned threads falling into the narrow gap between two koma: curve the ends. This took longer to work out on paper and in OpenSCAD than it took to print in high-speed draft mode (30 minutes for two). 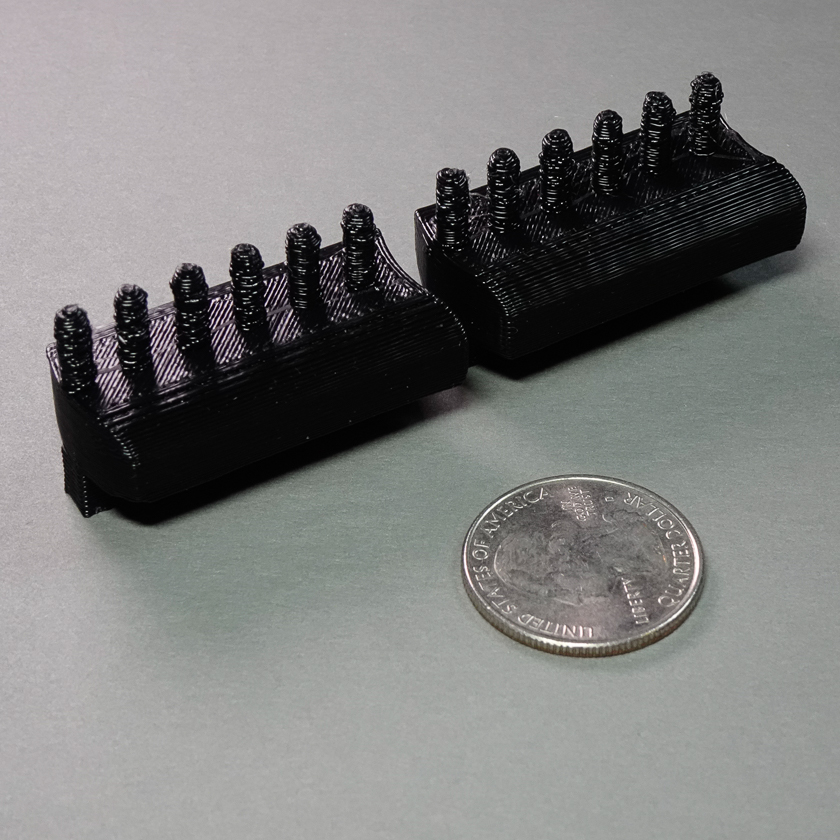 They came out exactly how I expected, and I was quickly able to confirm that the idea was sound, but I really wanted the curved ends to go the other way…

Thirty minutes later, I had another pair of prototypes. 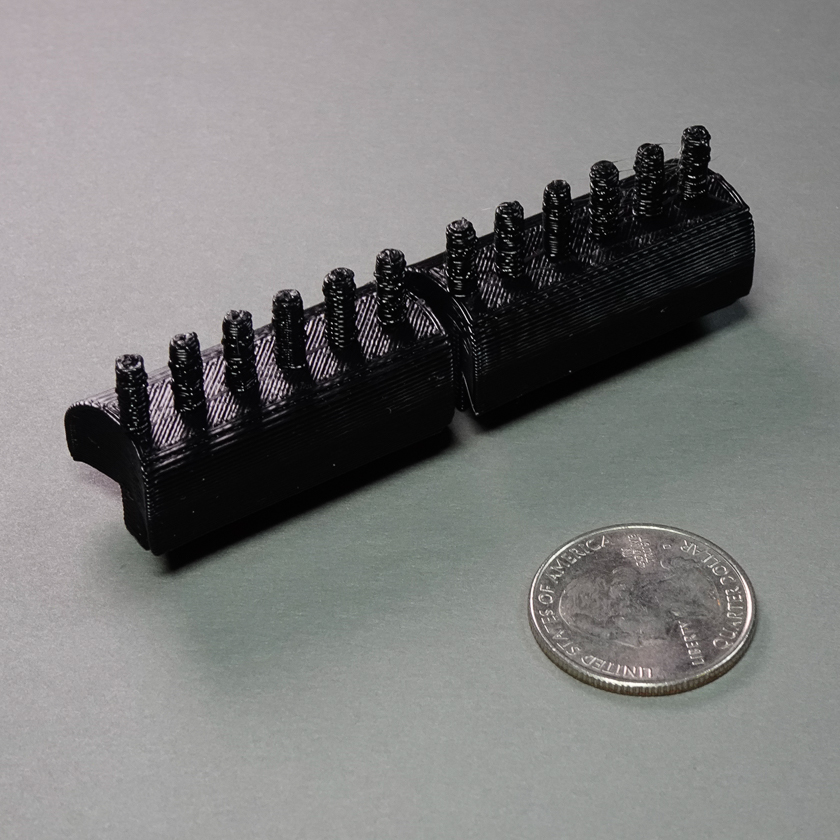 At this point, I have full confidence that the Dremel 3D45 will reliably deliver excellent 3D prints with their branded filament, and that I should be able to successfully import working settings for common third-party filaments when I get around to buying some.

The hardware is solid and well-designed, the software is quite capable, the filament seems to be of decent quality (if a bit hard to find right now, between Corona-chan and their change from 500-gram spools to 750-gram), and the price is reasonable for the feature set. The packaging is excellent, by the way, and easy to reuse for travel or repair.

I haven’t used the High or Ultra quality settings yet, or increased the infill percentage; Medium/20% was smooth enough and strong enough for koma with 1/8-inch pins and small weighted tama. High-Speed (draft) is kind of ugly and a bit stringy, but does what it’s supposed to.

“The battle’s done, and we kinda won…”

My next project will be a more significant drop-in mod to the baby takadai, relocating the torii, take-up reel, and sword pads, unlocking the ability to use all those new koma I printed and make much wider braids with up to 48 weighted bobbins. I’ll be releasing the OpenSCAD models and STL files so that any of the other conference attendees can mod theirs. Given the crowd, though, I’ll likely also end up printing a few sets to send people. 😁

After that, well, as much as I love the capacity of the 22 9-pin koma on my Braidershand takadai, I also like to braid with thick yarn, and my first attempt at that made me wish I had a set of 6-pin koma with big wide gaps between pins. And since my OpenSCAD design is parametric, that’s just a few long print jobs (roughly 5 hours and 38 grams of filament, each). Hardly a project at all. I’ll probably do them in white; black would be pretty harsh against maple.

Then there’s that complete parametric takadai design I did a few years back, which could be easily framed with connectors like Jonction P. And the long list of CNC projects I still haven’t gotten to. And this idea I just had for an easy tilt/shift adapter for my Sony a6500 and an old Mamiya 6x6 lens. And…

I briefly toyed with the idea of designing parametric boxes for tama storage, since I have large quantities of bobbins in different sizes, weights, and shapes (236 total at the moment, but there will be more someday). Then I went to Michaels, based on a tip from the recent kumihimo conference. Their 99-cent crayon boxes hold 4 standard-size tama, their $1.99 pencil boxes hold 10, a larger pencil/craft box holds 9 large tama, and somewhere else in the store I found boxes that were perfect for holding 16 of the latest thing in affordable tama (another conference tip).

I don’t think I’ll need any more tama or boxes this year, but there will come a day when I’ve got 60 of one weight on the big takadai, 39 little ones on the babydai, 32 on the big marudai, 9 on the little marudai, and three dozen cats to feed.

Unrelated, this is the first time in 20 years that I have had zero trick-or-treaters, down from the usual ~120. I bought a few pounds of candy just in case, but especially since I’ll be working from home until June, I didn’t risk a big buy.

Fans spinning up on your Mac laptop during high network traffic? Apple ships a user-mode driver for common USB-C and Thunderbolt docks.