Miyako Messe in Kyoto hosts the Museum of Traditional Crafts. It’s small, fascinating, free, and quite expensive, because many modern examples of the various crafts are for sale. I ended up buying two Shingen-bukuro (Samurai Man-Purse), a handmade orin (the Japanese version of the popular “singing bowl”), a bottle of saké (that I should have bought more of; who knew matcha worked so well as a saké flavoring?), and an assortment of gifts. We’ll be visiting again in March.

One of the crafts on display was kumihimo, with some finished braids shown in their usual context as kimono ties, and some small sample braids next to illustrations of the equipment used to create them. There were two I’d never heard of, so I grabbed a quick pic with my phone and promptly forgot to look them up. 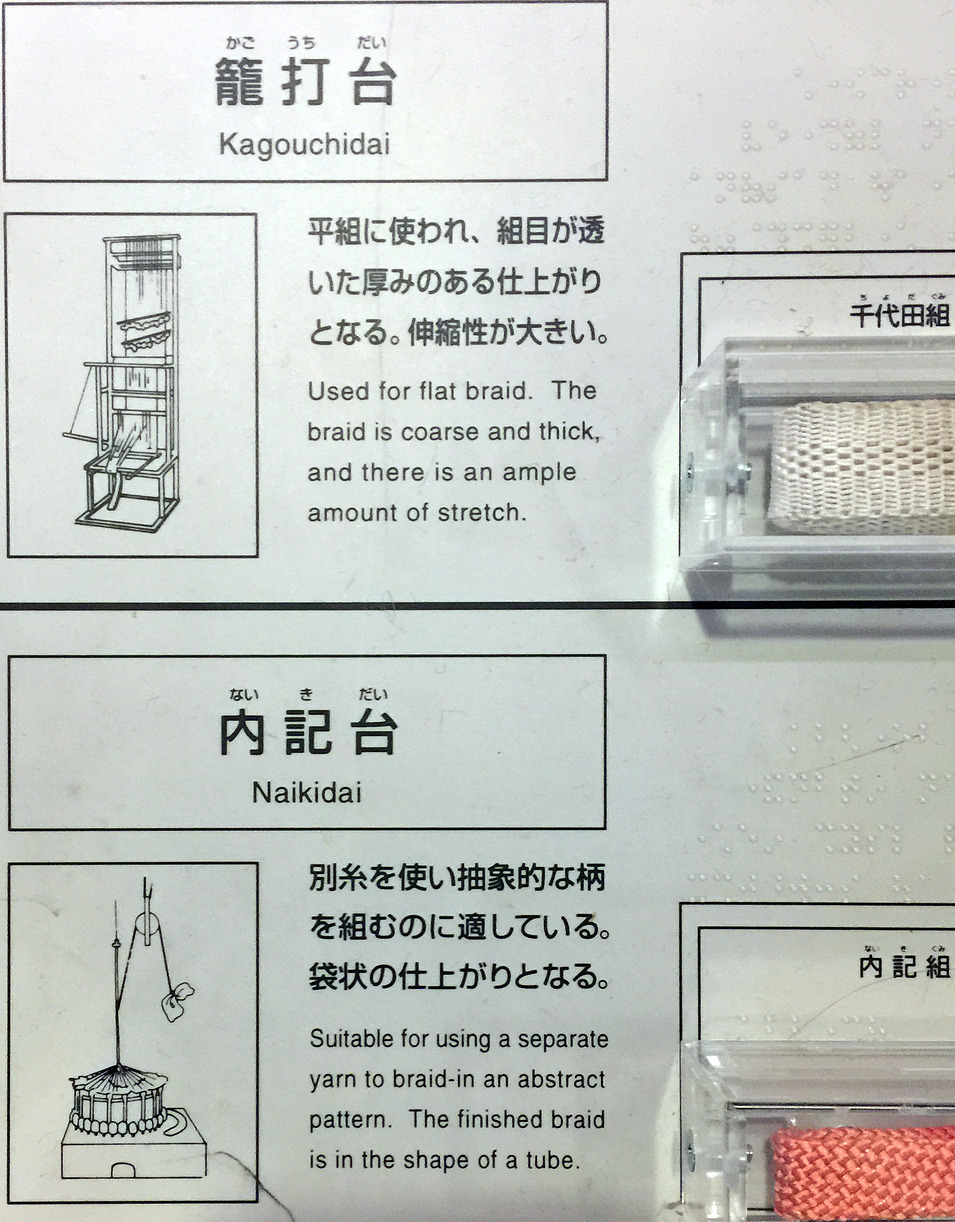 One was a special stand for making the Naiki-gumi (内記組) braid, with the appropriate name Naiki-dai. I know how to make that one on a marudai, so it was mostly of academic interest.

The other sample was called Chiyoda-gumi (千代田組), a loose chain-like structure that was more weave than braid, and the stand was an elaborate construct that looked vaguely like a warp-weighted rigid heddle loom that used kumihimo weighted bobbins for tension, called a Kago-uchi-dai (籠打台).

Last night I googled it, and the one non-BL result in English was a scanned PDF of a 1985 weaving journal article by Noémi Speiser, detailing her discovery of this device while working on her long-out-of-print book The Manual of Braiding, which, it turns out, just came back into print last November, and which includes instructions for the Naiki-dai (and, apparently, the Ayatakedai).

The text, pictures, and clear instructions in her article revealed that the Kago-uchi-dai is… a warp-weighted rigid heddle loom that uses kumihimo weighted bobbins for tension.

Coincidentally, a few months back, I got the idea of setting my card loom up vertically so I could use kumihimo bobbins to provide tension and allow the strands to freely untwist; I’ve been too busy to try it, but it seemed like it would work well, and now I know it will. 😁

Oh, and the kagouchi braid? Speiser identified the structure as identical to #2918 in The Ashley Book of Knots, and speculated that the rounded version the artisans told her about but didn’t show was likely #2919.