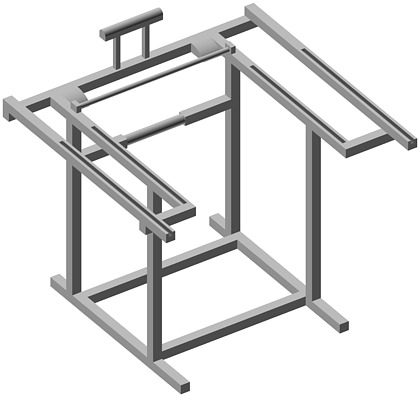 There are three basic methods for acquiring a takadai: buy, build, or kludge. They’re sufficiently uncommon that the only US retailer has an 18-month waiting list, and the two widely-available construction plans (Owen and Franklin) are for small, portable units. I have both plans, and I don’t like either one. Why not?

"The opening between the lower rails was designed so that a braider with a shoulder width of approximately 15.50 inches is able to work without leaning forward or pulling in the elbows, so that back strain is minimized." --- Carol Franklin

Franklin’s design puts the space between the rails at 18 inches, Owen’s at a bit over 16. My ribcage is 18 inches wide, so using one of these designs as-is would be like flying coach in the middle seat between two football players. It’s not gonna fly.

The two “standard” sizes available in Japan have roughly 22 and 28-inch openings, but they’re designed with a built-in kneeling platform, not a comfortable position for most Westerners. They’re also pretty darn big, with the largest one measuring 110x100cm (43.3x39.4 inches).

I don’t want to spend $650 and wait a year and a half for what is admittedly a piece of fine furniture, but I also don’t want to fly coach, so it’s time to design my own. I learned a lot from the kludged-together Bakadai, and since I can’t use the Owen/Franklin plans directly, I’m free to question every detail of construction. I’m working in OpenSCAD to make the numbers easy to tweak, and my current design (pictured above) is here.

First, what are the functional constraints on the design? I need the following elements:

The traditional position of the makitori-bō on a full-sized takadai is about halfway down the torii, with the torii itself acting as the stop for the brake. Owen et al have moved this to a position between the rear legs, which requires a longer leader cord, but gets it out of the way on smaller designs, essentially replacing the rear support for the kneeling stand. I like this change, because it gives me enough room to get rid of the chopstick brake and replace it with a proper gravity ratchet (not shown).

The location of the hyōjun-bō is a bit arbitrary, and the sword pads go wherever the gedan meets the rear cross-beam.

Pretty much all Western-built takadai are derivatives of Owen’s design, which is in turn based on Aiko Sakai’s reduced-scale takadai/ayatakedai combination stand. Apart from some minor variations in proportions and joinery, they’re all put together pretty much the same way, like my picture above.

But does it really make sense to scale that small design back up? This picture highlights the key elements: 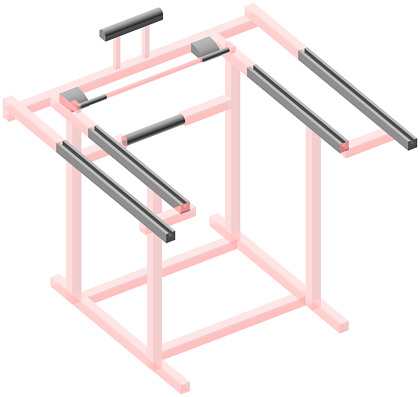 Each gedan/jōdan can have up to 5/6 pounds of weighted bobbins hanging off the outside, which means that the torii is being pulled forward and down by up to 22 pounds of bobbins (+50% if you use 9-pin koma instead of 6), and the makitori-bō is being pulled up by the same amount. So why is the torii held up by spindly little arms pegged into the crossbeam, and why is the front of the jōdan just hanging out there putting stress on the gedan? And what’s keeping the whole thing square and preventing racking? They’re typically made of ~1.25x1.25-inch hardwood furniture squares with simple knockdown joinery, and it all just seems a little iffy to me.

I haven’t decided yet how I’m going to connect the parts, but this ain’t it.

I should note that while I show the gedan and jōdan with grooves (mizo) to hold koma that have a tongue on the bottom, I don’t like that design, either. Frankly, the whole idea of making standard koma is enough to make me give up in disgust, because that’s probably 80% of the work involved in making a takadai: each one has a half-round top, a tongue rabbeted out of the bottom, and 6 holes drilled in the top and filled with short lengths of quarter-inch dowel, all carefully sanded and waxed to keep the threads from snagging. The 9-pin koma from BraidersHand can be seen here.

My idea? A 6-finger “comb” set at a 45-degree angle, so that the threads hang freely over the side. That’s basically how the Bakadai worked, and it’s a lot easier to make. Rather than a routed groove, they can slide between two dowels set at different heights. Like this, but with the edges rounded a bit: 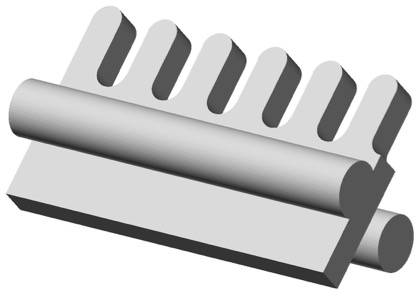 [Update: I’ve added a rough calculation of the minimum required height (translucent square in the revised OpenSCAD file), based on the worst-case scenario of moving the last thread on the jōdan to the first pin on the gedan. Essentially, you lengthen a thread when you move it through the shed so that the bobbin has enough room to dangle freely in its new position, even when the shed is open. However, you never shorten a thread, and as it moves closer to the front, it dangles closer to the floor. If the legs are too short, it will hit the floor and lose tension. As a result, I increased the height by an inch.]