There are web sites where you can figure out the origin of your pipes, such as Logos and Markings and Pipedia, and both link to other sites where aficionados of a particular brand have gone into obsessive detail. Even that’s not enough, though, and sometimes you don’t even have a name to google. In the case of one of Dad’s pipes, just a stem mark that looked sort-of like a fish-hook.

A sharp-eyed youngster (under 40) at the local pipe shop thought it might have originally been a nearly-vertical “♂” symbol where most of the white paint filling the stamping had worn off, and careful inspection confirmed it. But searching for “male symbol pipe” is a bad idea, even with SafeSearch turned on, and I gave up after a while.

Until a few days ago, when I happened to be looking at the history of Laxey Pipe Ltd, which specialized in making African Meerschaum pipes for other companies. If you’ve seen a Peterson or Barling meer, it’s probably a Laxey, and they were located on the Isle of Man.

Sure enough, one of the sample contract pipes at the bottom of the page is Comoy’s Man Pipe, with the same distinctive bowl carving and ♂ logo as Dad’s: 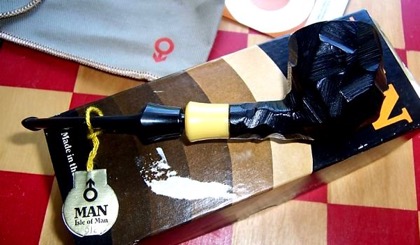 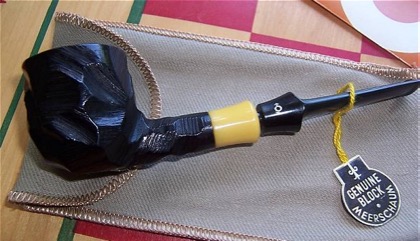