I’ve been sorting through the (partial) collection of my father’s pipes that we found in the basement of his house. They were in an open rack, and between the oxygen and the walker he hadn’t been down there in years, so they were pretty filthy. In many cases I couldn’t read the markings until I’d scrubbed the stummels in diluted Murphy’s Oil Soap, and I’m still cleaning and waxing them.

We know we haven’t found them all yet. For some people, 53 pipes would be a lot, but when the University was out for the summer, he’d often work at a local pipe shop, and the pipe cabinets he made himself would fill up a little more. Most of what we have now are those pipe-shop specials, an eclectic mix of minor labels, store brands, seconds, basket pipes, and red-headed stepchildren, and he smoked the hell out of them all. Even the one with the bowl so big I can fit my entire thumb inside.

There are a few “name” pipes in the mix. Two Savinellis, a Comoy, a GBD, a Barling, and two Ropps (including their trademark cherry-wood), and one hand-made that he must have bought in France when he was running the summer abroad program, a Pierre Morel from St. Claude.

And then there’s this, with the hand-engraved signature “E. OSG”. I swear it was rusticated by earthworms. 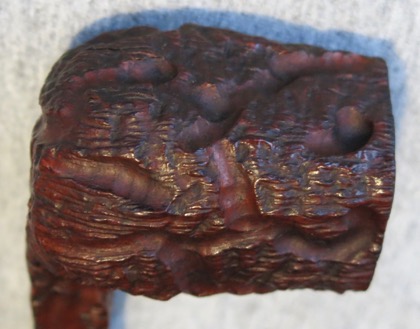 I’m sure there’s a story that goes with it, but it’s one we’ll never hear now.