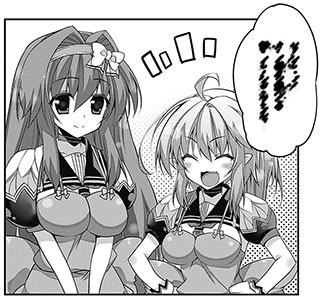 Both manga follow more or less the same path so far, with volume one ending soon after the Witch’s Arms incident. There’s some young Fino flashbacks in Straight that set up the big reveal in volume 2, but nothing comparable in Ecchi.

The big reveal in Straight comes less than halfway into volume 2, before Amada appears on the scene. Volume 2 of Ecchi isn’t out for another six weeks or so, but I’m guessing they do the same.

I think the order of those events is what they’re changing for the anime. Speculations and spoilers below:

Why hire heroes? Because they want them to do hero work, on their terms. Why try to break Airi’s spirit? So she’ll be obedient and grateful when she gets the chance at hero work again. Why ignore Fino? Because she’s the most important part of their plan, and they can’t risk screwing it up: they want a new Demon Lord.

But does Fino want the job? In Straight, there are flashbacks that not only set up how Dad was defeated, but also show that life wasn’t all hellpuppies and deathkittens for young Fino. For all her bombast, she was sheltered as a child, and saw some things that really disturbed her. The anime doesn’t have those flashbacks, but it does have Fino interacting cheerfully with a lot more humans when she fills in over at Lawson, and giving her two new friends. That episode was to give her more reasons to not want to be Demon Lord.

As a side note, I’m guessing Shell’s not in on the really dirty parts of Amada’s operations. Some of that is Wikipedia telling me who he has a crush on, but I think that if they’re really merging Amada into this storyline, then he’s going to end up helping the good guys.