Stumbling across this screencap from the current Strike Witches 2 episode, I found it curiously Kino-esque. 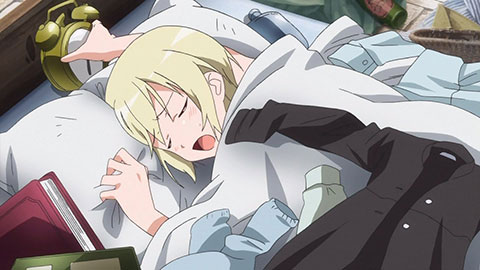 One wonders if her legs talk.

As the strongest vocalist in the sadly-defunct Melon Kinenbi, I think you could have done without the crap autotune effects on your debut solo single, 「killing my caddy」. And maybe made it sound a bit less like something cut from the soundtrack of Project Gotham Racing.

And maybe released it through something other than a Japan-only, cellphone-only streaming site. Look into selling on iTunes; any distribution mechanism that requires more effort than “Google for a torrent or a Hotfiles link” will never put money in your pocket. You have ten years worth of loyal fans who will click a simple “buy now” button, and you didn’t give them one.

It’s catchy, at least, even if it doesn’t sound much like you.

That is, “people who are currently taking their first class in basic tech support”.

Me: “Hey, Apple, in Ping’s user profile display, song titles that contain apostrophes are cut off at the apostrophe, so that Don’t stand so close to me comes out as Don.”

Them: “I see you have written in with a concern about Ping and word recognition.”

Me: “Um, no; let me break it down into a nice numbered list for you.”

Them: “To resolve this issue, I suggest you uninstall and re-install iTunes. I have consulted with another Agent, and we have found that this is the best solution for this issue.”

Me: “…or I could wait 24 hours for Apple to fix the problem on their end, which they just did.”

“Uninstall and reinstall”, the fuck-off-and-die of customer service.

More promotion than they've had in years...

…and it’s for a coffee commercial. Seven former members of Morning Musume are the new kimono-clad coffee cuties for Georgia Coffee (only five featured in this ad), Afternoon Musume: 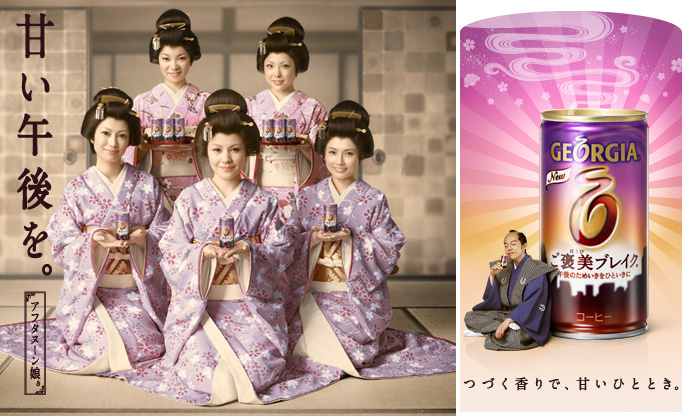 Surprising that someone didn’t think of it earlier, given that their first single was called Morning Coffee.

[Update: the actual commercial is up now]

In other promotional news, Yuko Nakazawa (front and center in this picture) has another campaign running at the moment, for a weight-loss product. 37 looks good on her.

Tera: a breath of fresh air?

So, the new kid on the MMORPG block will be Tera. All I want to know is, how did they make it so far without realizing that they named one of their races potpourri?

Did I say “fresh air”? I meant “air freshener”.

If you’re going to redirect people from versiontracker.com now that you’ve closed it down and replaced it with a less-useful site, could you at least redirect them to a similar page? Honestly, how hard is it to forward versiontracker.com/macosx to download.cnet.com/mac?

[Update: ah, it seems they did a very narrow redirect with an exact string match, without checking for all the common variations saved in bookmarks, including trailing slashes, index pages, etc. The exact example above now works, but some of the other variations still don’t.]

It ain’t just the thought that counts. Especially when it’s an afterthought.

Best music video I’ve seen in quite a while. Oddly enough, it isn’t even in Japanese… or Korean…

It used to be that when domains expired, they were either redirected to some scam product site or overpriced “you can buy this domain” page, depending on their pagerank.

Now they’re turned into ad sites that look exactly like the original site, graphics and all. So, for instance, what was once the promotional site for the US release of Kino’s Journey is now a bunch of links to online “pharmacies” hidden behind the original text and graphics, and the domain itself is now registered in Costa Rica by a Russian.

Lt. Smash’s blog went the same way a while ago. It looks like his old site, but it’s just spam, with the HTML and images scraped from some archive. I’ve run into others, enough that I’m now wary of all my old bookmarks that still seem to work.

(…and which Apple now uses for auto-completion when typing URLs in Safari 5, one more reason that’s a really stupid feature…)

He died back in July, but I just heard about it a few minutes ago. The SF novels he wrote in the Seventies and Eighties are full of crunchy goodness, and the prologue to Code of the Lifemaker is just plain fun.

… like using a single MAC address to repeatedly attack nearby wireless networks for several days.

Recettear is a silly, fun, and surprisingly deep game about being the shop owner in an RPG adventuring town. Windows-only, and allergic to most netbooks due to the mostly-invisible use of heavy 3D graphics (honestly, it looks like it should run on ancient hardware, but somehow all sorts of crap is getting linked in), but worth booting up a VMware session or less-anemic laptop for (my Lenovo S12 w/ION handles it just fine).

Short take: extensive free demo, clean enough for kids, earbug-worthy background music, full English translation with limited Japanese vocals, unusual default keyboard controls, no DRM if you don’t buy through Steam. Gameplay mixes customer relationship management, Econ 101, and casually-paced dungeon-crawling. The only time you can’t just save and come back is in the middle of a dungeon, but there are town portals every five levels.

Random TVTropes link of the day...

If you have a problem, if no one else can help, and if you can find them…

maybe you can hire… The Cliché Team.

…but “not a native English speaker” seems likely:

"...and has made a freeware available on a language-learning software."

Oddly enough, the person being referred to has lived in the US for decades, and the book it appears in was printed in the US by a Boston-based publisher.

Adventures in the Amazon

As I sometimes do in idle moments, I have once again plunged into the depths of Amazon’s recommendation system and returned with rare and precious gems.

Because I purchased The Key To Kanji: A Visual History of 1100 Characters, I might like the Wii game A Boy and His Blob.

Because I rated VMWare Fusion 3 (again, quite highly), I am sure to enjoy MP3s of the album It’s Never Been Like That by the band Phoenix.

Because I added the 14x25-inch size of 3M Filtrete 1900 MPR, 6-Pack, Ultimate Allergen Reduction furnace filters to my cart, I not only desire a copy of Precalculus: Graphical, Numerical, Algebraic, but also Grade 1 Subtraction (Kumon Math Workbooks).

And then comes the prize…

"If you're not familiar with that company..."

These were the words I just heard from a telemarketer after I politely asked her to repeat the name of the company she identified herself as representing and then said that I had never heard of them. Then she hung up on me.

Apparently she came pre-abused, so I didn’t even have to abuse her. It was a little early in the day to be completely burned out from cold-calling random strangers, though; I’m thinking she doesn’t have a future in the business. She didn’t really sound like a “Michelle”, either; she sounded like someone from India who was trying to hide that fact, and the resulting overcompensation made her even harder to understand.

(blocked caller-id and a generic-sounding financial-services-company name, so of course I wouldn’t have taken their offer, whatever it was going to be, but I didn’t even get the chance to shoot it down)