The NSFW teaser trailer is out for Fight Ippatsu! Juuden-chan. Youtube has already removed at least one version of it, so that link might not last long (now updated with alternate site…). The show is either going to be much less revealing than this clip, or heavily censored for broadcast, but that’s not what I’m going to talk about. Instead, let’s look at the relationship between heroine Plug Cryostat and her rival Arrester Blanket: 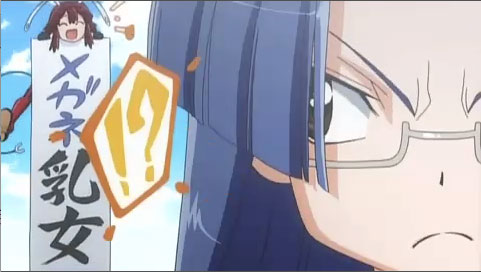 After her intimately-detailed transformation scene, Plug intrudes on Arrester’s intro and holds up a sign reading 「メガネ乳女」, “megane-chimé”. 乳女 is not a word you’ll find in dictionaries, but it’s in common use on the Internet, which shouldn’t surprise anyone who recognizes the characters for “breasts/milk” and “woman”. Clearly she feels comfortable enough about her own figure to tease her top-heavy senpai.

[You’ll also find the characters in the other order, 女乳, read as めにゅう, “menyuu”. Searching for either one will bring up lots of sites featuring women possessing Arrester’s bustline, if not her glasses. The odds of those sites being worksafe are very, very low.]