You don't know them

If you hang out with fans long enough, eventually you’ll hear something like this:

"I think we 'know' our idols better than their casual friends do."

This doesn’t just come from creepy stalkers, although it’s certainly how they get their start (“Hi, Mike! Been thrown in jail again yet, or have you finally stopped projecting madonna/whore complexes onto total strangers whose albums you buy?”). It may be most common with celebrities whose careers are built on selling an image, but every field has fans who feel a personal connection to the creator of the works they idolize. With multimedia idols, though, it’s much more pervasive; fans have watched them on stage, fooling around backstage, getting annoyed in interviews, breaking down in tears, getting flustered by personal questions, etc, etc, all contributing to a feeling that they’re able to see through the editing to The Real Person.

Yeah, we're geeks; deal with it. 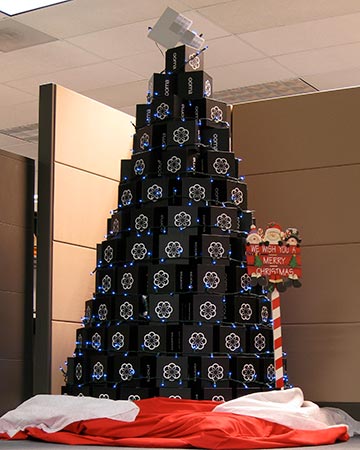 Last week, I got a letter reminding me that my 2002 Lexus RX-300 was due for its 200,000-mile service. Monday, I called the dealership near my office to schedule it. The service tech asked for my phone number, typed it in, and said:

J: No. But you have the right name and phone number.

S: Um, okay, we’ll just schedule this manually, and I’ll tell someone about the glitch.

A few minutes later, I realized why the address he gave sounded so familiar: it’s the dealership I originally bought the car at, in Monterey. I figured he had just clicked the wrong option and ended up looking at their inventory.

No. When I showed up the next morning, they typed in my name and said, “wow, you’ve got a lot of cars.” I pointed out the address, and someone laughed and said he knew what had happened:

everyone has admin privileges in the system, and the last time I'd come in, the tech had made the "rookie mistake" of transferring every car at another dealership into my name instead of transferring my car's home dealership from there to here.

He was surprised that I hadn’t gotten 115 warranty service reminder calls.

Hopefully not the last we hear from her...

Hello!Project is kicking out the grown-ups to make room for younger idols. Among those being cut loose is solo singer Aya Matsuura, known for the goofiness of her early work and a recent shift to a more adult-contemporary style.

The big difference: Fleet is a standalone novel set in Known Space. If you have a vague memory of Ringworld and the short stories, you’ll be fine. Juggler, on the other hand, is not only a direct sequel to Fleet, but also to more than a dozen Known Space short stories (including everything in Crashlander), which are air-dropped into the story at seemingly random intervals. The “big surprise” is also so poorly handled that for several chapters you can’t be sure that a major character wasn’t just another reference. On the plus side, it gives a faint nod to the old “down in flames” story idea, which was more fun than most of the backstage views of decades-old stories.

I’ve read all of the Known Space stories several times, so I got most of the references, but the secret history of the secret history of Beowulf Shaeffer just got tiresome after a while, and it took up space that would have been better spent expanding on the interesting new characters who were the focus of Fleet. They’re pretty much reduced to spear-carriers in Juggler.

Fleet stands alone quite nicely, and adds some real depth to the Puppeteers, both individually and as a race. I didn’t dislike Juggler, but I doubt I’ll reread it.

I’ve been reading Girl Genius since the first issue came out (on actual paper!), and it’s easily Phil Foglio’s best work. I knew he’d done a lot of design and plotting work before starting the comic (some of which can be seen in the very entertaining card game), but until yesterday, I hadn’t really appreciated how far it went.

I’d read the whole thing several times over the past few years, without ever realizing exactly what happened in this scene. Oh, my.

A little birthday present from Blizzard...

I’ve been leveling up a Death Knight in World of Warcraft. Like many people, I put most of my talent points into Unholy, so I have a ghoul pet. They’re pretty disposable, and they get random NounVerber names from a relatively small list of thematically appropriate elements. I’ve had a few amusing names show up, but today’s was absolutely perfect.

From Moskau to Berryz

It began with this, discovered through an email that led from failblog to Engrishfunny:

This was not some ancient one-hit wonder, cruelly abused by Youtube. No, Dschinghis Khan had quite a success after Eurovision, and they’re still big in Japan. How big?

This is sad. The people on Hello!Online are surely well-versed in the ways of fashion disasters, but this is the picture where they finally decide to complain about the outfits? Is it because there aren’t enough colors? Is it the lack of feathers?

This is claimed to be a real product, not just a design concept, but I can’t imagine anyone actually using one. Certainly not in a home with kids, pets, or, say, people. I understand the motivation, but antlers at ankle level?

Gosh, I can’t imagine why…

Milk: the cure for the common asshole

Random moment on Google Earth: I clicked on a photo of Takeshita-doori (major teen shopping street), and found the following banner:

If you're getting hassled by an irritating person,
try making them drink milk.

I’m thinking that’s not going to help much. I can’t quite make out the kanji in their smaller banner in the background, but if it’s the same quality of advice, I think I’ll stick to pepper spray.

Who do you hire?

You are Sony. You are having an event to celebrate a cool new Playstation 3 game. Its name? Little Big Planet. Which celebrities do you hire to emcee the event?

The littlest woman and biggest man you can find, actress/singer Mari Yaguchi (4’9”) and kickboxer Hong-man Choi (7’2”). 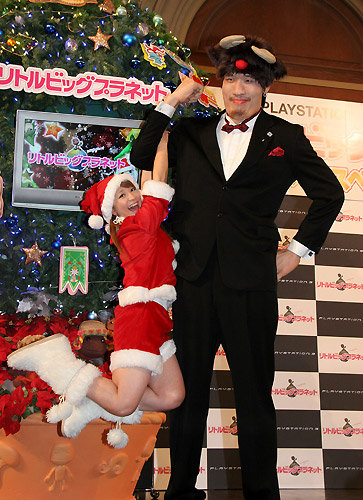 When did The Rock become a pop-eyed cartoon dad? Because I’d swear that in the absolutely dreadful trailer for Race To Witch Mountain, his facial expressions were produced by animators.

You can take the girl out of Hello!Project

…but you can’t take the Hello!Project out of the girl.

When someone installs a machine and enters somedomain.net as the hostname, please do not insert the line “search net” into /etc/resolv.conf.

You know what Anaconda really needs?

An Unselect All button, so you don’t have to manually click on dozenshundreds of “optional” packages that are installed by default. It’s pretty sad that the easiest way to reduce the amount of cruft in a Fedora/Redhat/CentOS install is to ignore the GUI package selector, install once, save the resulting Kickstart config, load it into a text editor, strip out everything you’re sure you won’t need, re-install with that template, and then see if you ended up with a bootable system.

This still installs a lot of stuff that you’ll never need or want, but at least the resulting package list is smaller, and after a few iterations you can build a decent server or netbook install.

[Update: If my script is correct (package selection from comps.xml and dependencies from primary.sqlite), installing Fedora 10 without changing the default list of packages will install 1099 1109 1116 1070 RPMs out of 2218 total; stripping out the default-but-optional packages brings that down to 510 514 522 505, which still includes a working Gnome desktop environment. A typical offender is a2ps, which pulls in texlive, imagemagick, ghostscript, ncurses, groff, and plenty of others (even libthai!).]

I’d also like a Really, Really Unselect Everything That Isn’t Necessary For This Locale button; “core” and “base” still have a fair amount of cruft in them.

Note: this is not a Linux-versus-{Windows,Mac,whateverdude} posting; it’s just about the difficulty of overriding the decision to include every precious snowflake’s package in the standard install. The decision to enable every compile-time option doesn’t help, either, since you end up pulling in half a dozen other packages on the off chance that the user is in an environment where one of them might matter.

Why do I care? Because about six weeks ago, I did an update on my EEE PC running Fedora 9, and there were so many updated packages that I didn’t have enough free disk space on the 4 GB flash drive to download them all, much less unpack and install. I had to symlink the yum directory to a loopback-mounted ext2 image on another flash drive (because the drive itself was FAT32, which wasn’t good enough).

[note on the twice-updated RPM counts: my script wasn’t handling conditional packages correctly. I was processing conditionals before resolving all dependencies, so it missed cases where the package in the condition was added by a dependency, not by another group. A good example is language packs for OpenOffice: you select the packages for each application, all of which depend on the -core package; when you add support for a language, it adds the office language packs if it sees -core.]

[Update: Okay, I had to completely redo the dependency resolution, because multiple non-conflicting packages supply the same requirements. Anaconda chooses exactly one of them, apparently based on the length of the package name (shortest wins). My script now produces exactly the same results as a default install of F10, so the numbers should finally stop changing.]

Yes, it’s the Christmas holidays and I’m tinkering with Perl scripts that parse XML files and SQL databases. It was worth it, however, to discover that the circle is now complete: Emacs requires Perl.

Also awk, bash, cpio, ping, and sed, but hey, who doesn’t need those?

[Yes, that list is so basic that it would be surprising if a package didn’t end up pulling one of them in somewhere down the dependency chain, but Emacs is a Lisp interpreter with delusions of godhood, built around text processing; why would it want Perl? Turns out there’s exactly one Perl script in the distribution, packaged up in emacs-common: /usr/bin/grep-changelog]