My other PDA is made of wood pulp

I was sitting in a meeting today with my iBook, and a late arrival walked up and asked if we could chat for a bit afterwards. Normally when he needs to talk to me, it’s either to pick my brain on some operational aspect of the service, or see if I’m willing to commit my team to supporting the latest project that’s steam-rollering down on him.

In this case, he wanted to talk about Stickies. Seems he’s been writing a replacement for the current OS X version, and decided that I might have useful input to offer. Something to do with the cascade of 30+ notes covering almost every square inch of my screen, taking full advantage of multiple fonts, text color, note colors, minimization, etc. Also physical post-its attached to flat surfaces on the laptop.

We compared notes on apps like TinderBox (which we both hated) and the Windows-based 3M Post-It software (which I’m quite fond of), and also discussed my habit of mixing electronic and physical post-its and todo lists.

I own a Franklin Planner (and still wish that someone would implement a todo-software priority system that’s as useful as their paper method, or at least compatible with it). I own a Newton 130 and a 2100. I am still in possession of an early HP clamshell-style Wince device. There’s a Rex around here somewhere. I’ve got a Palm V that wakes me up every morning. I have Outlook and Entourage and iCal, and have tried damn near everything else on the market at least once. My real PDA? 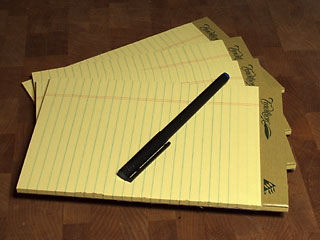 I go through these things like candy. I buy them in bulk at the local Costco, and at least five of them are in use at any given time, plus the torn-off archives that are stacked all over the house. They’re shopping lists, day-planners, design notes, cheat-sheets, to-do lists, FAQs, pseudocode, recipes, wishful thinking, and just plain doodling. The primary downside to this scheme is that it can be destroyed by windows. Not the Big Bad Bill Gates sort of windows, the 17mph winds when you open one sort.

The Mac OS X Stickies app, despite its limitations, is gradually taking on some of these tasks, at least the ones that happen in the vicinity of a computer. The small number of background colors (that I can almost tell apart reliably) supply some categorization. Stacking order supplies some hint of priority, but font and font color supply a lot more (sadly, these options are not visible in a minimized note). Finally, dragging minimized Stickies around on the screen lets me adjust the order I’ll tackle them in. And it makes a dandy fidget toy.

Unfortunately, there’s only one workspace, and either all your notes are visible or none of them are. This is bad when you’re sitting in a meeting and the person next to you gets an unexpected insight into the sort of new DVD releases you’re looking forward to. Being able to place notes into containers that can be separately printed, exported, minimized, sorted, etc would be a major win (and in fact it is, in the 3M software). Conceptually, I think it would be cool if a Stickie were itself a container for other Stickies, but I can see some problems with the UI to decide when you’re trying to stack two notes and when you’re trying to drag one note into another.

But it would make perfect sense to a user, since I know I’m not the only person who assembles collages of post-its on a legal pad.

On the other flipper, Stickies does a number of things I have no use for, or actively resent. Floating and/or translucent windows. A data file that’s binary garbage. Notes that scroll without scrollbars. Embedded images and movie clips. Notes that Just Disappear when you click the close button. A useless Find option. Drop shadows that obscure the differences between the note colors.

But Emacs-style keybindings work for editing the text in a note, so I’m willing to cut them some slack for a while.

Update: Stickies has improved a little since I first wrote this, but it’s still one of the least-actively-developed utilities in OS X. Pity, really, since it could be so much more than it is, without much additional effort. Container support, an XML datafile, decent multi-note printing, and the ability to search for text in multiple notes would knock the pins out from under the third-party developers that Just Don’t Get It.

Update: I recently upgraded my PDA. The nice folks at Levenger make high-quality ruled pads in multiple sizes, colors, and layouts. They’re a genuine pleasure to use. They cost about an order or magnitude more than the stuff I mentioned above, but for any notes that last longer than the next trip to the grocery, they’re worth it.