Ever since I first got the back yard landscaped with lots of plants and ground cover, it’s been a popular daytime hangout for the neighborhood cats. After I had the front porch extended and put some chairs out there, I discovered a group of young cats who liked that even better than the back yard.

Some of them still come by occasionally, and I’ve gotten used to the sound of disappearing cats when I open the front door.

Recently I decided to install some cameras outside the house, mostly to watch for package deliveries and solicitors, but also to keep track of porch cats. I went with the Arlo Pro kit based on a friend’s recommendation (actually, he has the older Arlo; I went with the Pro because it adds local USB storage). Good hardware, easy set up, usually-quick notification of events (~5 seconds), iOS app is a little flaky and sometimes falsely claims that my system is offline. I like it enough that I’m probably going to add some more of the first-gen cameras for the garage and rear entrances after I’ve had it for a month or two.

To reliably detect cats, I had to set the porch cam to the highest sensitivity, which unfortunately generates occasional false positives due to wind hitting my bamboo, but I’ve caught two of them so far, one of whom I hadn’t seen before.

Orange cat has been a regular daytime visitor since he was half-grown, and always sits in the left chair, which gets plenty of sun. He used to sit in the bamboo pots, but gave that up after I added them to the drip system: 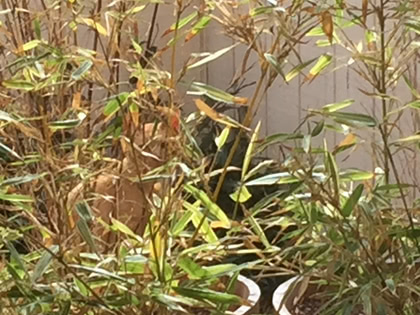 New cat comes mostly at night, always sits on the right chair, and vanishes instantly when I open the door. I’ve got some low-res night-vision shots of him, but the best picture I’ve managed so far was a quick out-of-focus snap through two panes of glass as he was making his escape through the back yard. 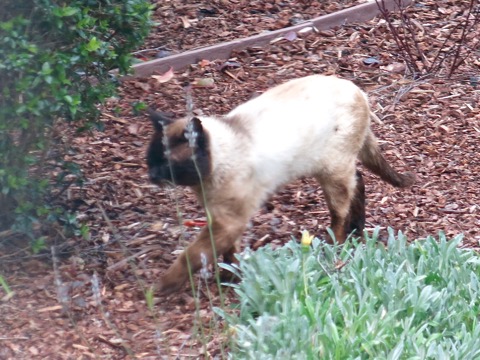 Clearly I need to hide a camera in the bamboo, so I can get close-up shots with better focus.