It started out innocently. Well, relatively so, anyway. I was looking for a clean copy of the 80s J-pop song “Sailor Fuku o Nugasanaide!” (for reasons that will become obvious if I ever get around to it), and while there are plenty of videos on Youtube, most of them either have terrible audio quality or an announcer talking over part of the song, or both. And none of the versions on US iTunes are useful.

So I ended up on Amazon Japan, where I found a recent CD collection from Onyanko Club that includes the song. But that wasn’t all that turned up in a search for “セーラー服を脱がさないで”… 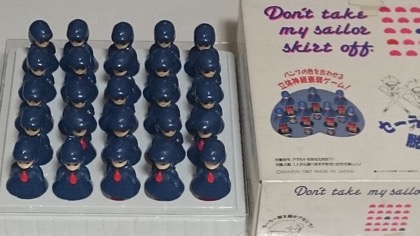 It’s a concentration game based on memorizing the color of schoolgirl panties. Pick up a girl, look up her skirt, and try to remember which other girl had the same panties. The partial box cover shows it was released by Bandai in 1987, the year that Onyanko Club disbanded, so it may not have sold well. I’ll have to look for it next time I’m at a flea market in Japan, but I insist that I’d only buy it to find out if the figures were hand-painted, because Japan. :-)

Of course, there were a number of adult videos in the search results as well, and for this young lady (NSFW), losing her sailor suit is the least of her problems.