[Update 10/15: Ars Technica reports that Microsoft has called this a “mistake” and promised to fix it in the next update.] 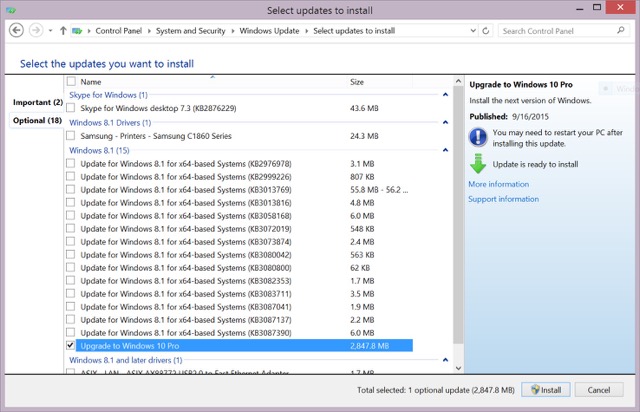 [Update: this isn’t happening to everyone, so I suspect the fact that this device is a Surface Pro 2 is the reason. They may pull this stunt on other users later, but someone likely decided that people who owned a Microsoft-branded tablet would be thrilled rather than appalled. They’re wrong, of course, since there’s no way to undo it and they removed full system backup/restore in Windows 8 (Acronis works nicely). They seem to think that their “system restore” functionality plus user-data backups is sufficient, neglecting the days of work it would take to reconfigure applications and restore data that isn’t covered by their partial backups.]

[Update: at this point, it looks like the auto-install kicks off if the background downloader has successfully finished copying the N-gig image to your hard drive. If you don’t leave your machine on unattended for long periods of time, you might not get the surprise for a while.]