One consequence of her rushed departure this morning was that Marika forgot to grab a report that was due today (small handwave about requiring a hand-written report for that class, rather than using all the tech they’re soaking in). She gets Mami to bring her lunch in the classroom while she furiously rewrites it, and notices a crowd of students chatting up Chiaki, and also catches Chiaki staring at her. Mami thinks the crowd is trying to recruit her for their clubs, but says they’re too late: she’s apparently already picked the yacht club.

Cue exposition from Marika about why the yacht club would attract a new student, including the nice cruiser they have, which she’s never seen used because there’s no teacher qualified to run it… stop, check teacher directory, and sure enough, Kane has suddenly become the new club advisor. Mami looks over her shoulder and scrolls through his certifications: (loosely) “WTF? A Class 2 Interstellar Ship License!?! He could be a captain with that, why is he a teacher?!?”.

Looking over his long list of certifications, Marika wonders how much of it isn’t a pirate forgery; all sorts of piloting, vacuum welding, combat, astronomy and physics teaching license, etc, etc. Captain, hell, she thinks, he could open a one-man ship repair shop. Marika also finds it suspicious that a transfer student shows up right before the semester ends and joins the yacht club, but goes back to her sandwich rather than obsessing over it.

In the clubroom, Jenny welcomes Kane as their new advisor, having just heard about his hard-to-get ship license. While Jenny is excited about the chance to take out the Odette 2 for the first time in 20 years and wondering why he didn’t mention that when he signed up for the job, Kane is wondering just how much Hyakume padded his phony résumé. Lots of exposition about piloting and solar sails, and the senior girls talk him into reading up on the operational details, promising that they know their jobs as crew. He’s still trying to beg off, and Marika needles him a bit, asking just how different can it be from piloting pleasure cruisers, pirate ships, etc.

[Kindle note: the publisher inserted a GIF for the Roman numerals 1 and 2 everywhere they appear. This turns out to be a common issue in the publishing workflow for light novels; even though the Kindle format is UTF8 XHTML, they still do most of their work in ShiftJIS, converting for publication, so I’ve started searching for images smaller than 4KB to make sure I catch the non-SJIS characters, which in some cases are just goofy.]

The clubroom scene goes on for a while, with Kane doing a good job playing teacher and Jenny challenging him a bit. He takes charge and assigns everyone tasks, sending the first and second-year students off to the simulators to continue the programming established by the previous advisor.

Marika lags behind them so she can talk to him and get permission to leave early for work, and when she reaches the simulators, almost all of them are in use, so she goes to hop into the first available one and finds Chiaki inside, claiming she hadn’t managed to find the door switch yet. Marika helpfully walks her through the basics of this simulator model’s operation, and winds up accidentally looking into her eyes at close range and feeling a bit of a shock. Then she manages to fall into the cockpit and land on top of Chiaki, whose emotionless response is “you’re heavy”. After she climbs back out and watches the door close, Marika is surprised to find herself a bit excited by another girl (「女の子同士なのに、なんでどきどきしてるのよ」). She gets into the last open simulator and joins the gang attempting to dock at the relay station.

Back to Kane, he’s surprised that the yacht club’s really nice communication gear can’t connect directly to the station or to the ship, and finds that it had been deliberately cut off for the students (gosh, I wonder why…). He gets it reconnected, and the senior students cheer his prowess and get to work on course planning and logistics for the upcoming cruise. Getting them started, he heads off to the control room to watch the simulator run, noting that Marika is in #18 and Chiaki in #17.

He spots suspiciously recent changes in the programming for the simulator control system, and pulls out his own pirate-modded pocket computer to investigate. His security scan finds some underground hacker code running, which he traces to simulator #17. Kane isn’t the least bit surprised to find that Chiaki’s not your typical transfer student. He sets up a wireless connection to his computer and starts pulling down data about the Odette 2, and heads back to the seniors. He finds alarms going off all over the place, since it seems they cut a few corners and tripped the security systems on the station and ship. He cleans up the mess and gives them a very teacher-like lecture on the risks of taking shortcuts in space.

He heads back to the simulators, and despite having started last, Marika’s in the lead for docking, having done some clever things with sun and sail and power. Chiaki’s in the middle of the pack, having been distracted a bit by her hacking. Marika docks, hops out of her simulator, and runs over to Kane to ask if Chiaki is another Bentenmaru crew member. Kane says no, Marika wonders if she’s from some other pirate crew, he agrees that’s likely, and says they’re already looking into it. She heads off for work.

Chiaki’s hacking manages to shut down the control system, and Kane ends the simulation for the day and sends the girls off to help their senpai. She leaves last, and with everyone else out of earshot, Kane scolds her for her clumsy hacking and reveals himself as a pirate. She pretends not to hear and walks away.

Cut to the school clinic, where a quite exhausted Kane-sensei meets up with Misa and gets a beer. They go over the data he recorded and discover the Odette 2’s history as one of the Original Seven pirate ships, the Shirotori (swan). Wondering how a sailing ship could be an effective pirate, he digs into the records and finds that it was constantly being upgraded over its service life, with far more sophisticated gear than would be appropriate for a troop carrier or merchant ship, and realizes it was a Q-ship. He wonders just how much of its post-war history is faked, especially the disarmament part, and sends a message to the Bentenmaru suggesting some of the crew join the maintenance team for it.

Off to the café, and a bunch of suspicious-looking customers. Pretty much the same scene, with only three real differences: Chiaki is in a standard Hakuou uniform, finds the chocolate parfait delicious but not orgasmic, and ends up not paying for it, to Marika’s surprise.

After returning to the café and gathering her things, Ririka picks her up and heads straight for the ship graveyard for target practice. Sadly, Ririka does not keep a massive arsenal hidden in the garage; she has Misa and Kane meet her out there with a load of guns in the back seat of Misa’s car.

En route, Ririka talks a lot more about guns, before talking about the difference between soldiers/cops and pirates when it comes to making a decision about pulling the trigger. Before going offroad into the military target range, she calls up a general and asks for permission, clearly expecting approval. Marika is surprised she could just call up a general late in the evening and get through to him; Ririka explains that as a spaceport controller she handles and consults with all sorts, and in fact Marika’s even met this particular general at a party.

Ririka in her pickup truck races along offroad with no regard for Misa following behind in her spiffy convertible, and finally they reach the range, full of busted tanks, planes, and spaceships. Ririka picks up one of the bigger guns and starts the fireworks, and asks Marika if she wants to try it. Ririka laughs at her firm refusal, and asks Misa what little guns she brought along. Misa pulls a small beam pistol out of her pocket and takes a shot, asks Marika if she’s familiar with its operation, and on finding out she’s not, “Ririka, how are you raising your daughter?! Gun-handling is basic education!”.

Ririka answers that it just never came up. She takes the pistol, sets it on the hood of her truck, and begins giving Marika a basic lesson. Kane and Misa snort when she says that the first rule is to never point it at people. “Don’t laugh, she’s a beginner!”. She coaches Marika through some basic shots, helps her realize why she should shoot two-handed, and then moves up to her old assault-rifle beam gun. Marika: “Captain Ririka used something like this?!?” Ririka: “Don’t call me that!”

Ririka hands her the gun, adjusts her stance and grip, then cranks it up to full power, causing Misa to ask if that’s okay for a beginner. Ririka insists that with a good grip and stance she’ll be fine; this is the smaller civilian model, not the full military version. Marika shoots and likes it, smilingly asking Ririka if she can shoot it again. Given the nod, she cuts loose rapid-fire, turning the wrecked tank into swiss cheese, and causing Kane to mumble “Trigger happy, huh?”. Misa responds, “Just like Ririka”.

Ririka says, “that’s power”, and continues as Marika comes back to her senses, “what you’re holding now is power. If you command a pirate ship, you’ll wield even more power. Scared?” In answer, Marika aims the gun straight up, fires one more blast, lifts her shooting glasses for a moment to watch the beam, and says, “so pretty”. Then she faces Ririka and asks if she can try out the other guns. 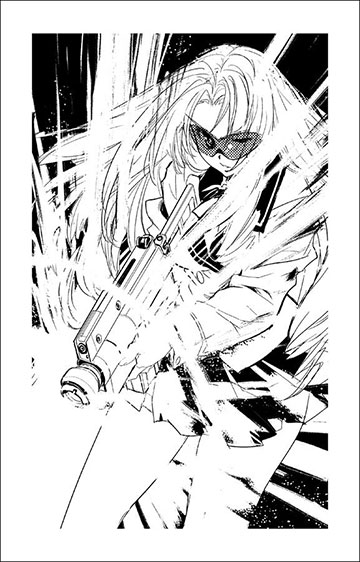 [on to chapter 3, which is just the relay station, so it’s pretty short, and then off on a cruise in chapter 4]