Hopefully this nonsense was just painted on for the photo, and she doesn’t really have this tattoo. It’s classic Hanzismatter material. I can’t see them all clearly, but the fifth and sixth look like the top and bottom of “老”.

I’d like to credit the original artist, since the content of the “tattoo” is only a minor part of the composition, but of course it arrived through Tumblr, a system that goes out of its way to hide sources. My search dead-ended at the ironically-named Cool Tattoos tumblr.

[Update: the model’s name is Salleh Sparrow, and sadly, it is indeed a tattoo. She’s also a photographer, so it may be a self-portrait; I eventually traced it back to a defunct DeviantArt page under her name. The slightly larger version of the image that I found didn’t make the characters any clearer, and her Facebook portfolio doesn’t have anything that shows them off, either.] 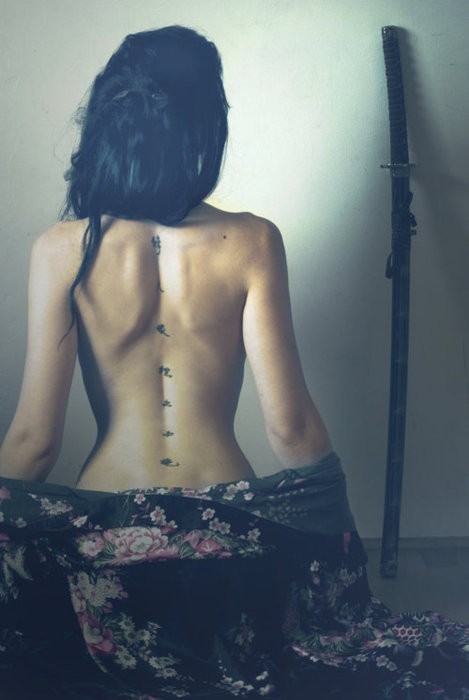 Speaking of Hanzismatter, I think this is my new favorite bad tattoo. At least the tattoo artist used a real character, and the result is only a bit absurd, not obscene or gibberish.