[Book four finished; I think I’ll go back and review for a few days to clear up some rough spots, then spend the holiday weekend reading book five]

In the anime version of AsoIku, Jens is a terrific villain. Smart, tough, competent, dedicated, and ruthless. At first, she has a bit of a chip on her shoulder about pathetic humans, but then, the only ones she’s really spent time with are pretty slimy. She’s the sole member of her race currently on Earth, and she runs the whole operation with her aide Muttley: smuggling alien technology, manipulating governments, planning covert operations, and leading full-scale military assaults. She’s good at it, and once she starts taking them seriously, Our Heroes need brains, skill, guts, and luck to overcome her.

Her motives make sense. Her actions make sense. Her final plan is brilliant and vicious, meticulously planned and expertly carried out, and if it had succeeded, it would have accomplished exactly what she wanted. She’s head and shoulders (and bust…) above the usual Bad Guy in anime.

In the books, Jens and Muttley play catch with an idiot ball.

But first, a cast picture, and a spoiler warning… 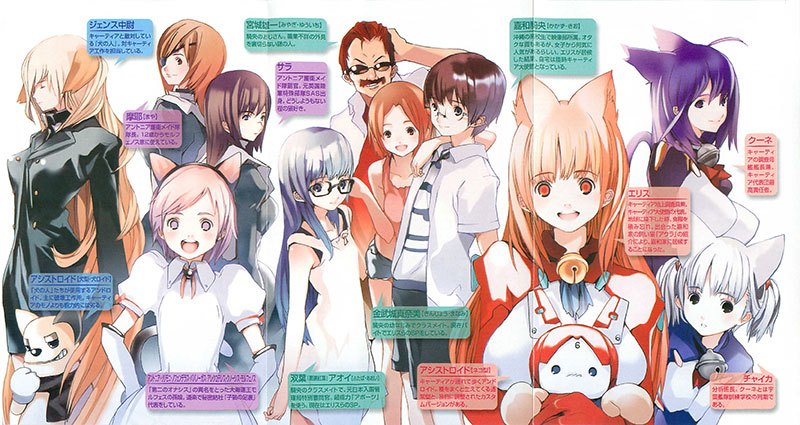 (note that the captions for Maya and Sara are reversed, and Muttley isn’t listed by name for some reason)

Now, the big change is that the anime Jens is actually a composite of several characters from the books; not only is she not alone on Earth, she’s not even the top Dog. First Lieutenant Jens is introduced in book 2, where her winged superiors assign her the job of taking out Eris and her allies on Earth, instructing the DIA liasion to place all his forces under her command. The unnamed Dog dealing with humans in book 1 wasn’t her, and that person seems to have been just the military commander of the mission, with overall control being in the hands of the Barunmuu (not mentioned by name until book 6, but that’s what the winged aliens are called).

She’s a competent junior officer, capable of handling a straightforward covert operation, but her actual assault is pretty blunt. She’s reprimanded for her failure and given a second chance to do the job right, but her request for a full squad of troops is turned down, and instead she’s given Muttley as an aide and tutor. She spends the next book getting a cram course in strategy and tactics from him, before finally coming up with a plan good enough for her superiors to sign off on. The plan is the same as in episodes 10-12, and the execution works out much the same as well, but here comes the idiot ball.

As her troops escape from Kio’s house following the successful attack on Kuune, one of them leaves behind a small holographic projector, in which a poorly-disguised Jens appears, claiming to be the leader of the terrorist organization Beautiful Contact, delivering a third-rate evil-overlord speech accompanied by over-the-top music. They ignore her and continue their discussion. She tries to break in and get them to take her seriously, but Aoi points out that they’ve already met face-to-face, so there’s really no point in pretending not to be a Dog. Aoi then apports the holo-projector away, and they get down to business. Back at the base, Jens throws a tantrum; after she went to all the trouble to put on the embarassing disguise and come up with a stage-villain SF terrorist manifesto appropriate for BC, how dare they see right through it and blow her off. She trashes her room in frustration and rage. She pulls the same stunt with the Catian bridge crew, this time pretending to be the leader of “Comtegu Elite” (no idea), delivering a short declaration of war before cutting communication (the resulting confusion leaving her in a much better mood). WTF?

Now for some cool. During the attack, Sada-yan took out one of the attackers, stole his disguise, and joined their escape, going so far as to repair several of them during the trip back to Jens’ base, where he then used the air vents to make his way to her office and hack into her computers. As he sneaks back out, he gets caught by Muttley, who noticed the intrusion. Muttley catches him by exploiting a cat-based weakness in assistoroid design: he has one of his soldiers roll in a ball of yarn, which no cat can resist. Sada-yan manages to teleport to safety moments before he’s blasted to bits, rejoining Kio in time to pass on what he’s learned. Funny, and cool, and both assistoroids come off well.

Now for more stupid. Muttley doesn’t tell Jens what just happened. He tells his troops that it’s too late to make big changes to the plan, so they might as well not ruin her good mood prematurely. “We can’t win”, he says to himself as they go back inside.

Later, when they go up to their orbital platform, Jens boards her ship, and Muttley salutes her and starts to walk off. “Where are you going?” “Back to Earth” “Yeah, right; get in here.”

Side note: while the general shape of the space battle is the same, there’s a key difference: Manami isn’t there, just Aoi and Eris, so Our Lucky Hero only gets two hot kisses, which Aoi shyly insists are just for good luck. Eris’ big speech about sharing Kio actually happened last book on the beach, and that was also only with Aoi. I don’t know yet if Manami’s interest in Kio was added for the anime, or pulled from later books. If the former, it’s the biggest change they made in adapting the series.