[prologue through chapter 6 (of 11) up now, catching up after being diverted by a fresh batch of naked catgirls...] 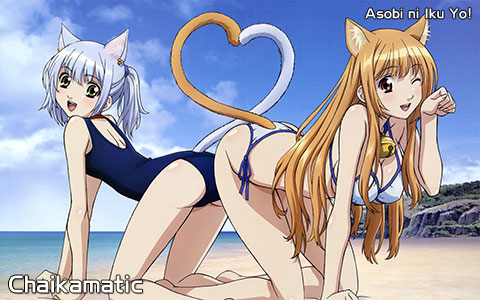 General note: the first book was adapted almost shot-for-shot into the first two episodes, with the notable addition of Aoi's opening action scene. Some minor characters were eliminated, consolidated, or set aside for later use, but almost everything else appears, in the exact same order.

This book forms the basis of episodes 3-5, but the order of some scenes were rearranged, some were omitted, and some new ones were created using material that was presented differently in the book. Many of the changes are improvements; for instance, there's no need to show great-aunt Ushi giving Kio and the Assistoroids a lesson in how to make yakiniku. Others were done simply to emphasize the harem comedy side of the story, such as having the catgirls use their bells to change clothes in front of Kio, giving him an eyeful. The small joke about two #17 Assistoroids is anime-only, and in any case, they got their numbers in book 1. 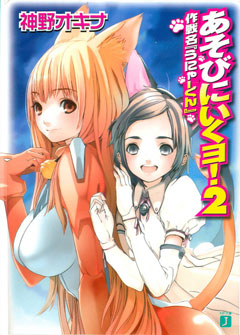 [32] Prologue: They were wild about cat ears

[464] Chapter 2: She was dancing the mambo in the morning

[819] Chapter 3: Riding an airplane was terrible

[placeholder! I was going to finish up my notes and post them Sunday, but after an annoying Saturday involving a 70-mile drive to cannibalize my personal file server to replace the power supply in one that our execs rely on, I'd rather get started on book 3. Significant differences between book and anime: Ichika is introduced and revealed as an earth-born catgirl, First Lieutenant Jens receives her orders in person, Aoi's past is revealed (from her point of view; you don't find out the real truth until much later in the series), Hugh Hefner is credited as paving the way for the modern catgirl, and Kio gets some surprising assistance when he rescues Aoi.]