Asobi ni Iku Yo! book one

I've been keeping detailed scene-by-scene notes on this book, largely to check my comprehension (it's harder to read than Kino), but I thought it would be amusing to post them to allow a better look at how the series was adapted for anime, and to fuel speculation on possible future animation. The numbers will not be useful for anyone who doesn't have my copy of the marked-up text file, though; I did some cleanup on the version I downloaded, to clarify section and scene breaks compared to my print copy.

Warning! This is not only chock full of spoilers, it's also quite long. And there are pictures. 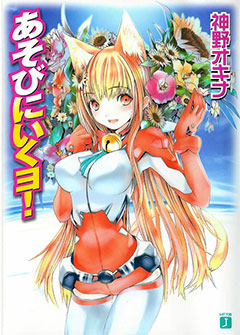 General note: chiki, dote, beki, zuru, hyoko, jaki. All of these non-words appear as complete paragraphs at various points, apparently representing sounds. Most are not "well-known" mimetic words, so I wonder if they're common as manga sound effects.

(TODO cleanup) From the far side of space, the calmly waiting "them" had been sending those words for nearly half a year in a specific direction. What's more, in that planet's many dialects. But there had been no reply. Because it had been determined that on that planet, they were still communicating by radio and cables (copper and synthetic), "they" didn't send signals intended for their own kind, but used equipment that they'd secretly installed near that planet's satellites.

Ordinarily people would get angry (at being ignored), but the bottomlessly good-natured "them" instead began to worry. Perhaps a world war had begun. However, their observation confirmed that while there had been a number of small-scale skirmishes, World War 3 had not started.

In any case, it was a single phrase. "We're coming to visit!"

The worried "them" decided to stop knocking on the door and "peek inside".

As part of the great hair-color controversy, I peeked ahead a bit. Yes, we get swimsuit diplomacy, but with one significant difference: Kuune, Dyureru, and Melwin are in school swimsuits, but Eris and Chaika are in... Maid-fuku! Sadly, they change in the elevator after the meeting, not in front of Kio. Eris' explanation of why they're dressed that way is the same. Chaika finds it hilarious, and teases Eris mercilessly about the sort of ideas she's picked up from Kio's secret stash. This is still in the elevator, so she's not actually looking through the magazine; presumably it got recorded at some point. "What are you saying, Chaika! I can't do that sort of thing when I'm not in heat!" "Oh, yes, we can do it any time, just like males!"