No, this is not the cast of the live-action Negima series, although it might be amusing to map one onto the other. This is Tsunku’s Army, also known as Hello!Project, in their mid-2005 lineup. Yes, some of them really were as young as they look. 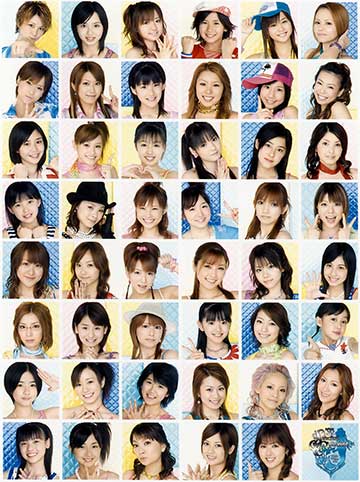 Most of them are still associated with the organization, at least on paper. Six are gone for good (three quit, two switched agencies, one was kicked out), but at least a dozen only perform at concerts maybe twice a year, and are otherwise not well-supported by H!P. The two teen groups get most of the promotion, with Morning Musume now third on the priority list.

Tsunku’s attention seems to be focused on bringing in new talent before they need training bras, which may be very Japanese, but doesn’t do anything for me. The only over-25 member who gets any significant promotion is Natsumi Abe. She’s also one of the few who occasionally manages to go on stage in costumes that aren’t hideous or unflattering, so I think she must know where the bodies are buried.