This comment on Electrolite strikes me as the core of pretty much every left-leaning blogger’s response to what might be called Operation “Bite Me, Liberals”:

"I basically think that if someone else had done it, it would have been a great thing to do."

As much as I disagree with many of the actions this administration has taken, it keeps getting harder for me to take Bush’s political opposition seriously. Certainly none of them are giving me any coherent reasons to vote him out.

Update: The folks at Snopes say this letter is legit. I think the Democrats are going to have some trouble winning the military vote…

Now here’s something I hadn’t seen before: 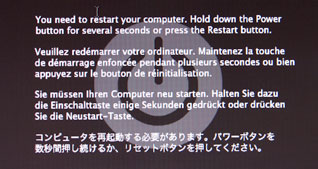 Fortunately I save early and often, and in the worst case I have a full backup that’s only a few days old (minutes, now!), but this was the first honest-to-gosh kernel panic I’ve had since I bought an OSX-equipped Mac. Quite a surprise.

/Library/Logs/panic.log seems to blame it on the Airport drivers. I can cope with that, as long as it doesn’t happen again. Then I’d have two reasons to send my shiny new PowerBook in for service (the first being the famous “white spot” problem that’s finally starting to become visible on my screen).

And people think Bush is a petty dictator?

He’s not even on the charts compared to local school boards enforcing zero-tolerance policies. My favorite part? If they had actually found the cigarettes that were the goal of their search, she’d have merely been suspended, but since they found Advil, a drug with no known recreational use, she was expelled for a year.

I hope the parents decide to sue. School board elections are a farce, and these clowns obviously have no shame, so the only alternatives are lawsuits and bullets.

Found this news story on Fark, with the coveted “dumbass” label. Intrigued, I read the whole thing. In order, the facts presented are:

In other words, after carefully constructing the story to give the impression that more than 200 crime guns were seized from a dangerous lunatic with ties to illegal drug labs, the reporter ’fesses up that they were just grabbing his public inventory and personal collection. This is a legitimate action given the charges, but it’s not evidence of guilt.

Is he a criminal? I haven’t the slightest idea. That’s for the jury to decide, not some spin-happy hack journalist.

My recent bout with the flu has left the refrigerator a bit bare, and I haven’t restocked yet, so I needed to throw dinner together from what was left. This worked out nicely:

I put three tablespoons of ghee in a 10” pan, put it over high heat, tossed in the ham steak, onion, hash browns, and chiles, seasoned liberally with my usual Lone Star Steak Rub, and cooked it all until the potatoes were nice and brown, stirring occasionally. Then I added the tomatoes and their juice, turned the heat down, put a lid on the pan, and let it all cook together for a while.

Pretty tasty, and quite filling. If I’d had some bacon, I’d have cut it up, fried it first, then used the grease to cook the rest (sprinkling the bacon bits on top at the end), but I was out. Next time.

I knew there was a reason I liked John Rhys-Davies. I mean, apart from the fact that he’s a damn good actor who livens up anything he chooses to appear in.

There are still a few games that aren’t available for the Mac or the Xbox, so I finally broke down and cobbled together a new Windows PC. Here are the parts I used:

Software is Windows XP Professional. I left an empty 4GB partition near the front of the disk in case I want to dual-boot, but like I said, it’s for games. The only real reason to install OpenBSD or Linux is to image the Windows partition for disaster recovery backups. I’ll probably start by using BitTorrent to grab the current Red Hat Fedora distribution.

If you’re going to make Linux into Windows, could you please try to match the behavior, not just the window decorations?

[translation: I just installed RedHat Fedora, and was astonished to discover that after it popped up a little dialog asking for disc #2, it didn’t detect the presence of the correct disc and continue on its own. It sat there for twenty minutes, patiently waiting for me to click ‘Ok’ to confirm that I had, in fact, inserted disc #2.]

Just tried to install nVidia’s Linux drivers for the onboard ethernet on my new Shuttle box. After transporting them on the only available media (USB keychain drive, which I had to mount by hand as root from the command line; love that user-friendly Gnome desktop!), I was greeted with a long string of syntax errors in the make output. Of course, I’d already had to abandon the build instructions provided by nVidia, because the version of rpm in Fedora doesn’t support the command-line options they used. It also apparently doesn’t support the C compiler they used.

So, to play with Linux on my shiny new PC, I once again have to play Goldilocks with multiple distributions, until I find the one that’s just right. Fuck that; it’s not worth the headache.

Update: Okay, I gave it another try. Seems I actually could get the network driver to install with Fedora, if I ignored the default OS install options and added the kernel sources. It seems they don’t expect ordinary users to own hardware they don’t provide drivers for. Still, after going through three or four “modern” Linux installers, my new slogan is “Desktop Linux: it’s like Windows without the QA”.

You've been in California too long when...

…your reaction to an earthquake is disappointment that the USGS Shake Map hasn’t been updated yet so you can submit a report on how it felt.

Biggest quake in the last four years, just in time for my sister’s birthday!

Quote from someone who ran a business in the Paso Robles building that collapsed during the recent quake:

“My roof basically jumped onto the street and landed on cars with people in them.”

Stargate, the movie. Not what most people would think of as a typical Christmas Eve film, but I’m a bit burned out on anime after the ending of Mahoromatic (although I didn’t feel nearly as betrayed as Steven Den Beste, partially because I’d read the spoilers and they were even worse than the reality. But I digress). After polishing off my traditional Christmas dinner (pizza with pepperoni, onion, green peppers, and extra cheese, with a $20 tip for the delivery driver), I went through my piles of DVDs and picked this one.

Stargate holds a special place in my heart as one of the most godawful big budget science fiction films ever made. Magnificent visuals, but plot holes you could drive a truck through. I am constantly amazed that the producers of SG-1 managed to salvage a mostly coherent backstory out of this turkey.

It was quite a remarkable feat, really. They didn’t just keep the visuals and the names, they managed to use almost every element of the story, jettisoning only the most ludicrous aspects, and subtly tweaked what they kept. Better still, their new material fit in almost seamlessly, creating a rich universe ripe for exploration.

The biggest achievement of SG-1, however, was that it hit the ground running. I don’t think I’ve ever seen another SF series where the actors slipped into character so quickly and believably, and did things that made sense. Even with the occasional weak episode, the on-and-off casting, the rare slip into handwaved technobabble, and the Sci-Fi Channel’s habit of jerking the schedule around, it’s one of the few tv shows I actually look forward to.

I sort of follow Smallville (the first time in history that Lex Luthor has actually had a personality!). I mostly follow Angel (where do they find those women?!?). I usually watch Good Eats. I never miss Stargate: SG-1.

I’m told that the producers of the Stargate film felt horribly betrayed when MGM turned the property over to the people who developed SG-1. They wanted to make a feature-film sequel, taking the story in a completely different direction. To that, I can only say, “thank you, MGM”. I can’t shake the feeling that their sequel would have had all the charm of a flashback to the planet Zeist.

[much like the final episode of Mahoromatic; guess I can’t stop that digression after all. I suspect I’ll be gathering and extending the comments I’ve been exchanging with Steven on this one; I think I can beat his 5700 words and explain why I initially told him that the last five episodes “didn’t suck” :-)]

Not holding my breath...

It’s hard to take terrorists seriously when they’re reduced to sending out threats by email:

A London-based Arab magazine said on Friday that al Qaeda leader Osama bin Laden has vowed to launch a "back-breaking attack" on the United States by February, confirming an earlier message by the militant network.

The weekly al-Majalla said it received an e-mail from Abu Mohammed al-Ablaj, a little known al Qaeda member, saying bin Laden would release a video tape in which he affirms his group's determination to fight the United States.