I’m pretty sure no fan of either of those graphic novels has ever thought that was the one thing they were really lacking:

“In the tradition of Watchmen and The Dark Knight, but with more cussing. Zephyr is the superhero fiction series you’ve been waiting for.”

Vaguely related, the author of Konosuba apparently has a tech/fantasy isekai crossover series, Combatants Will Be Dispatched! (novel, manga). In which Our Hero is the top agent of an Evil Corporation sent to conquer a fantasy world with the help of his loli android sidekick.

In the color teaser pages for the second volume of the manga, Our Wrong-Genre-Savvy Hero laments the fact that absolutely nothing ecchi has happened to him yet, despite being the protagonist assigned to a group of sexy female adventurers. 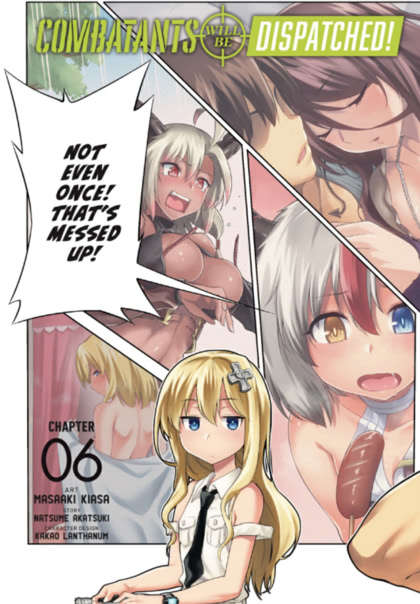 Why, yes, there will be an anime version.

Please Don't Tell My Parents I Found A New Publisher...

The Writer Beware blog is an excellent resource for learning about the many con artists and general scum preying on would-be authors. Sometimes, however, there’s unintended comedy (emphasis mine):

There’s some disagreement over whether there actually is such a thing as a hybrid publisher–a company that charges substantial fees yet provides a service that’s otherwise equivalent to traditional publishing, including rigorous selectivity and editing, high royalties, offline distribution, non-bogus PR, and more.

Perhaps they should post a list of precisely which traditional publishers qualify under these guidelines, which are widely reported to be more often promised than delivered…

I’ve been reading Good Omens every year or so for quite a few years now, so I had my fingers crossed that the Amazon/BBC mini-series wouldn’t screw it up.

They did not, in fact, screw it up. Pity they didn’t manage to get the two Doctors into the same scene, but Morrissey’s role was quite small and not really connected to Tennant’s.

They did not undo the grisly fate of the telemarketers. I like to think that this reflects a positive change in society.

Since our recent Bosch binge, I’ve been reading the novels. The first one I had to set aside for a bit was the author’s experiment with a second PoV, but that was minor compared to my issues with book 14, Nine Dragons.

I’m used to Bosch being reckless and breaking the rules; that’s kind of the point, after all. What’s different in this one is that he’s being careless and stupid. Repeatedly. I think the author was trying to show that the extremely-personal stakes are pushing him beyond all limits, but instead it comes off as “leaking brain cells out his ears”. Case in point:

He’s in Hong Kong, and needs a gun. Convenient Local Resource gets him a clean, untraceable 9mm pistol, with one loaded mag. But Harry can’t rely on an unknown gun, so he grabs a pillow and blanket from his ex-wife’s place, and tests the gun by wrapping it up and firing it twice. Inside a moving car. On a crowded street. Without warning the driver or other passenger.

Um, how does that even work? Won’t the slide get caught up on the blanket, making the second shot impossible? Also, where did the bullets go? And how’s their hearing after that? Were the blanket and pillow flammable? And, and, and…

Later he wipes down the gun and leaves it at a homicide scene, conveniently forgetting that he had previously handled the magazine and ammo without gloves.

That was not the last time I put it down, wondering who kept throwing idiot balls at Harry.

Dinking with parody O’Reilly covers reminded me of the one I’m in: 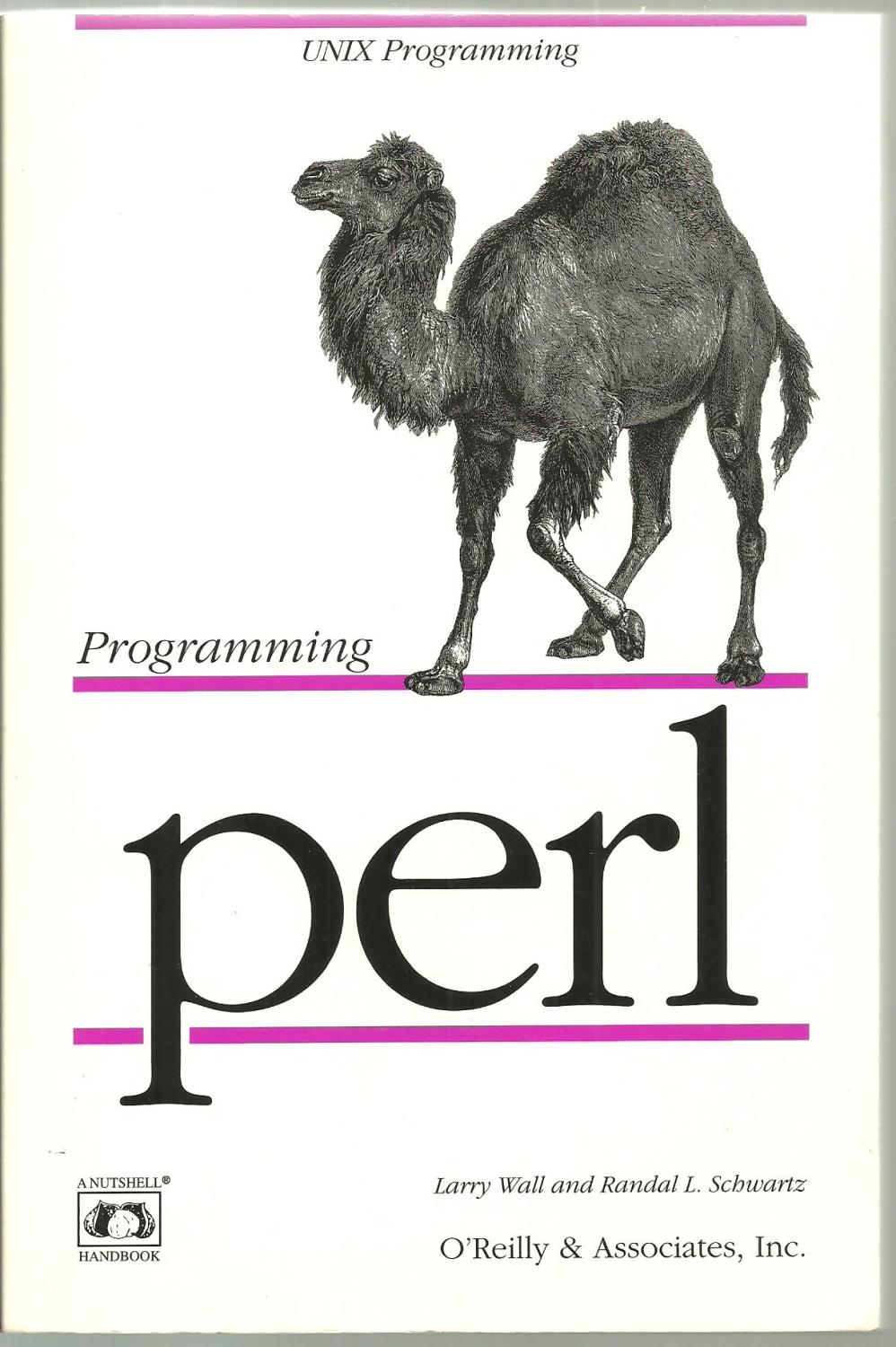 I wasn’t involved at all with the book, and I was, as they say, “just another Perl hacker”, but I did have one thing going for me: I ran tut.

tut.cis.ohio-state.edu was our “big iron” back in the day, a multi-user Unix box that had the dubious distinction of running both BSD and SysV Unix, at the same time. It was one of the few machines that was more for research than instruction, and among its many hats were: Usenet backbone site, GNU mailing list to Usenet gateway, anonymous FTP site, anonymous UUCP site, and (for a while) Compuserve’s tape-based Internet email relay.

[seriously; Karl Kleinpaste would drive 9-track tapes over to their office and back]

In its FTP/UUCP capacity, it hosted all the GNU software, and Perl. Because the official distribution method was Larry posting multi-part shar archives to Usenet, until it got too darn big.

Anyway, my only appearance in the book is my old email address on page xxii, as the UUCP contact address. This was still enough for me to get support email a few times, from people who didn’t want to bother “the big names”.

“The text of this book is set in Times Roman; headings are in Helvetica®; examples are Courier. Text was prepared using SoftQuad’s sqtroff text formatter. Figures are produced with a Macintosh™. Printing is done on an Apple LaserWriter®.”

Oh, and when I dug my copy out of a box, I discovered two things: it’s signed by Larry and Randal (something I forgot decades ago), and it still has the original postage-paid mail-in card. I’d be tempted to send it in, but they moved their headquarters sometime after 1991…

He went back inside and got his other gun out of the hallway closet. It was a forty-four with grips and safety configured for a right-handed shooter. The cylinder also opened on the left side. Bosch couldn’t use it because he was left-handed.

I realize I’m 25 years late on this small but entertaining sample of “mystery-writer gun-writing”, but when my sister was out here for the holiday weekend, she mentioned that she really liked the series of novels she’d been reading recently on her constant international flights, about an LA detective named Bosch.

We ended up bingeing the first two seasons. She downloaded the other two to her iPad before heading out of the country again.

Having noticed my interest, a few days ago Amazon flagged a low price on the Kindle edition of 5 of the early novels, plus the first in a related series. Annoyingly, the discount was on books 1, 5, 6, 7, and 8, but at least books 2-4 were under my $10 cutoff, and the average price came to $5.75 for all eight.

Skipping down the page a bit, we get to:

And he could have taken it to a gunsmith and had it reconfigured for left-handed use, …

When applied to a double-action revolver, this statement is roughly equivalent to “jack up the license plates and change the car”. Harry Bosch would need more than a homicide detective’s salary to find a pistolsmith who could transpaw a .44 revolver.

Left-handed revolvers do exist, today, but any left-handed cop back in the days before semi-autos took over the market got the standard model, and built up muscle memory on how to reload it quickly.

(and, no, this is not like the very-right-handed target grips you sometimes see; Harry got it from someone who hoped he’d use it to kill bad guys, and he puts it into his standard carry holster specifically so he has something to hand over before crossing the border into Mexico)

(update: …and the cop at the border smirks at him when he sees Bosch sign the form with his left hand after turning in a right-handed gun, sigh. Fortunately, none of these details are actually important to the story; it’s just a bit of flavor text to establish that a cop can easily work the system and manage to be armed in Mexico)

The Penguin is a Harsh Ebook

Apparently the rights have finally been sorted out, and last week Penguin released Heinlein’s The Moon Is A Harsh Mistress for Kindle. TANSTAAFL applies, but they kept it under $10.